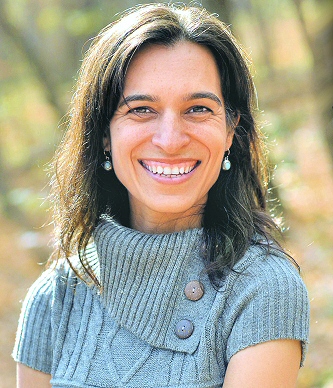 Creativity has been everything. Every single job Iâ€™ve had, including the less 'interesting' ones â€“ like delivering telephone books or data entry â€“ I benefitted from. I soaked up everything, and used all of it in my writing. I learned how to pay attention to the world around me, how to channel emotion, how to notice and store details in a creative way.

Is it possible to be a person of the people and an award-winning author at the same time? If you are Neela Vaswani '96, it's not only possible but it's the only way.

The Skidmore English major is author of a memoir, You Have Given Me a Country, winner of a 2011 American Book Award; the short-story collection Where the Long Grass Bends, and many other works, including the short story The Pelvis Series, which won the 2006 O. Henry Award. Last year she recorded the narration for the young reader's edition of the audio book, I Am Malala: The Girl Who Stood up for Education and was Shot by the Taliban. On Feb. 8, the work won the 2015 Grammy for Best Children's Album.

Equipped with an MFA in fiction writing and a PhD in American Cultural Studies, she also works as a professor in MFA writing programs, has held dozens of writer-in-residence positions, and founded the Storylines Project at the New York Public Library.

What is perhaps surprising for someone so accomplished is the range of vocations and avocations Vaswani has explored along the way including waitressing at a fondue bar; working at a one-hour photo booth; dressing Armani models; delivering phone books; doing cattle round-ups; driving an ice cream truck; and being a maid, secretary, and movie prop girl.

She soaked up these experiences, storing details for her writing, but she is also quick to assert the intrinsic value of each job. Says Vaswani, "I've always taken pride in all of my work, including my less glamorous jobs, like waitressing. I'm a good waitress and I'm proud of that."

Recently, she decided to return to school and become a physician's assistant. "It's never too late to challenge and surprise yourself," says Vaswani, "to let your experiences change who you are and how you feed your art."

Something about Neela Vaswani that you might not know: She plays the fiddle and knits and is fascinated by paleontology, the Indian railway system, female detectives on television, goats, bats, bad-tempered camels, and online Boggle.