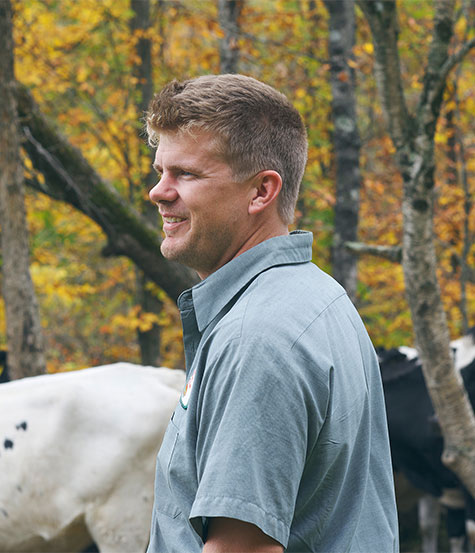 Business in general is survival of the fittest. You have got to be creative to come up with different ways of doing something, or a new product, or try to figure out how to make your product differentiated.

Growing up on a dairy farm in Salem, New York, Seth McEachron ’04 could have felt a lot of pressure to take over the family business someday. His family had been dairy farmers in the area for nearly a century, after all.

But he and his father made a plan for McEachron’s future: Go to college to study something other than agriculture, then take four years to try something different before deciding whether he was interested in the farm.

McEachron chose Skidmore College because he could get a broad liberal arts education and study business. Also, his sister, Sarah McEachron ’01, was already an education student at Skidmore. The business and economics courses he took at the College inspired him.

“My business classes led me to want to be an entrepreneur and got me excited about seeing what we could do to improve our farm, make it more sustainable and bring a great product to local people,” McEachron says.

He was so eager to get started, he didn’t finish the four-years-off-the- farm plan post-college. After a stint working for agricultural financial services company Farm Credit East, he partnered with his father, Don, in 2006 to start planning and implementing some fresh ideas on the farm.

First up: Bottling their own milk so they could offer a single-source, 100 percent traceable and local product. It’s an idea they had started discussing while McEachron was still at Skidmore, but the timing wasn’t right. By 2006, with the local food movement picking up, they were ready to take the leap and wanted to be the first dairy farmers in the area to do it.

“We were lucky enough to be in the right place at the right time, when people wanted to support local farms and get a high-quality product they enjoyed,” McEachron says.

In 2008, Battenkill Valley Creamery was up and running, with milk going from cow to bottle and on a truck for delivery within eight hours, resulting in a fresher product. Because the milk is separated cold rather than hot — and the whole milk is 4 percent instead of the standard 3.25 percent milk fat — it’s especially flavorful and creamy, too. Battenkill’s milk has twice been rated No. 1 Highest Quality Milk in the state by Cornell University’s Department of Food. And more than 1,000 high-end coffee shops and restaurants, such as Michelin-star restaurants like Per Se and Jean-Georges in New York City, use Battenkill’s milk, cream and half-and-half.

Battenkill does its own distribution, too, keeping it mostly local. Other than business deliveries to New York City and some home deliveries in

Peekskill, Poughkeepsie, New Jersey and Long Island, they don’t stray far from the Northway, mostly delivering to stores and restaurants from the Albany area to north of Lake George. They also offer home delivery in Saratoga Springs.

In 2009, the company started producing ice cream and opened an ice cream parlor at their Creamery Store in Salem as a way to draw the public to the farm. And they’ve continued to innovate, collaborating recently with Kru Coffee on a popular cold brew latte. Battenkill provides the milk and bottles the drink.

The Creamery has grown to meet demand — it produced 600 gallons of milk a week when it opened in 2008 and now produces 52,000 gallons a week — but hasn’t faced the same pressure most smaller dairy farms do.

“We’re lucky because we bottle our own milk,” McEachron says. “We set our own milk prices and we’re cutting out the middle man.” While McEachron says he can’t predict the future of farming, he anticipates more consolidation.

“Business in general is survival of the fittest,” he says.

And he continues to draw upon the lessons he learned at Skidmore. “You’ve got to be creative — come up with different ways of doing something, or a new product, or try to figure out how to make your product differentiated,” he says. “All of that is important with Creative Thought Matters.”