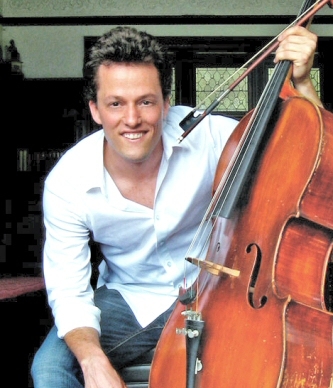 Nathan Barr ’95 has scored the entirety of HBO’s Emmy-winning and fan-favorite series, “True Blood,” in addition to composing for the TV shows “Hemlock Hall” and “The Americans.” In 2013, he was nominated for two Emmy Awards in the category of "Outstanding Main Title Theme Music" — one for "The Americans" and the other for "Hemlock Grove." Last year, an April episode of “The Americans” featured a collaboration between Barr and Pete Townshend, "It Must Be Done" — the first song the Who guitarist has ever written for television.

Prior to his TV work, Barr worked extensively with world-famous composer Hans Zimmer. In all, he has composed music for some 25 feature-length films. He has worked with some of the most highly respected directors, including Alan Ball and gore-horror master Eli Roth. So far, Roth and Barr have collaborated on five films: “Dimension Films” and Vivendi Entertainment’s “Grindhouse,” Screen Gems and Lionsgate’s “Hostel,” “Hostel 2,” and “Cabin Fever,” and Lionsgate’s “The Last Exorcism.”

But when Barr left Skidmore in 1995 music wasn't foremost on his mind. He wanted to be a filmmaker, taking an intensive filmmaking workshop at the New York Film Academy and then heading to the Hollywood hills. After less than a year with a movie production company, however, Barr decided to try his hand at composing. He sent his resume to Zimmer — and landed the gig. The rest, as they say in the movies, is history.

"Knowing how to tell a story with music is essential to being a film composer, and so my studies at Skidmore started that journey," he says. "Skidmore gave me the freedom to begin developing my own unique voice. which has been essential to my success in Hollywood.”