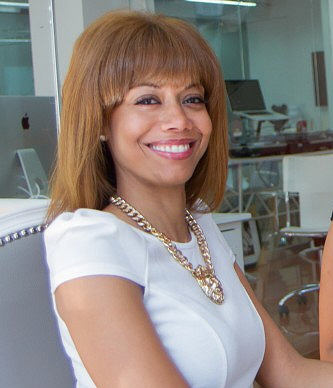 I absolutely love what I do! I'm passionate about it because I get to be creative, innovative, and strategic. I truly have a part in crafting stories and moments that help raise awareness as well as influence viewer/consumer consideration.

They are smart, stylish, and successful. They even shared a Skidmore dorm room. But what truly differentiates these “power twins” is not their ambition but their drive and determination.

Soon after graduation, Tricia Clarke-Stone ’98 landed an entry-level sales job at Emmis Communications, where she made cold calls asking businesses to buy radio ads. Through guts and guile, she dramatically exceeded her sales goal, and she’s been doing it ever since. Her identical twin, Antoinette Clarke ’98, got her start as a production assistant at the Montel Williams Show. Four years later, she was the producer.

Today, Clarke-Stone has risen to the top of the Big Apple marketing/advertising pyramid as co-founder and CEO of Narrative_ (previously the co-president of Global Grind), both collaborations with business magnate Russell Simmons. Narrative_ is a story-led marketing, entertainment and technology agency that designs experiences, campaigns, and products for brands across platforms. Clarke, a two-time Emmy Award winner who earned her stripes producing the Rachael Ray Show, the Nate Berkus Show, and the Tyra Banks Show, is VP of Branded Entertainment and Media Innovation for the CBS TV Network.

Clarke-Stone’s current focus is Narrative_ client Under Armour and its new shoe, the Curry One, a partnership with NBA sharpshooter Stephen Curry. Narrative’s marketing is deliberately different, according to a recent Fast Company.com article, for example, re-imagining a press conference by transforming an Oakland gym into a design studio with a deconstructed Curry One and a mood board that provided insights about Curry that influenced the design. “The brands that lead the way won’t chase and co-opt culture, they’ll create it,” says Clarke-Stone.

Though the medium is different, Clarke’s mission has a similar goal and cultural thrust. “Branded entertainment for us is the creation and natural integration of original branded content into television,” says the CBS executive. For example, her team makes sure a segment within a live, daytime show such as The Talk provides regular content, in addition to delivering a creative ‘how-to’ moment through a demonstration, fun challenge, or game, which weaves the specific brand and messaging into the execution. Says Clarke, “Viewers need to feel like they’re learning something new that will enhance their lifestyle in some way.”

Guess what? Clarke-Stone knew she had “found her calling” while taking the Skidmore business course, MB 107, in which her group formulated a plan to increase FOX-TV profits, presented it to real-life execs, and “aced it.” Meanwhile, Clarke, who majored in English, may well be Skid-TV’s most successful alum. From Skid-TV to overseeing CBS TV daytime programming. Now, that’s a leap!