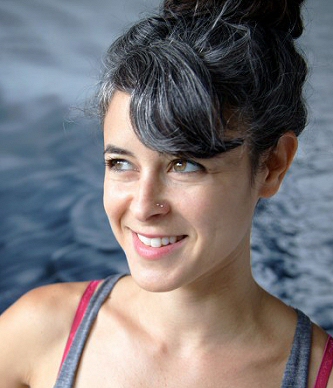 Artists play a critical role in communicating climate change, arguably the most important challenge we face as a global community. I have dedicated my career to translating and illuminating scientists' warnings and statistics into an accessible mediumâ€”a level that is perhaps deeper than scientific facts can penetrate.

"Impeccably naturalistic" may be the best way to describe Zaria Forman's drawings of remote landscapes and environmentally sensitive locations. Using her fingers and palms to render marks in soft pastels on paper, Forman creates large-scale images of glistening icebergs, turbulent arctic waters, and crashing tropical waves so stunningly realistic that they are easily mistaken for photographs.

Her aim: To show in a hopeful way the urgency of climate change.

Traveling to far-flung corners of the globe, Forman takes photos and creates sketches, working from these and her memory in her Brooklyn studio. She did a TEDTalk in 2015, and recently flew with NASA's operation IceBridge over Anarctica and the Arctic. A number of years ago, she led an Arctic art expedition up the northwest coast of Greenland that retraced the 1869 journey of the American painter William Bradford. Following the meltwater from the Artic to the equator, Forman later journeyed to the Maldives, an archipelago southwest of India that is the world's lowest-lying country, predicted to be entirely under water within this century.

"Artists play a critical role in communicating climate change, which is arguably the most important challenge we face as a global community," she says. "I have dedicated my career to translating and illuminating scientists' warnings and statistics into an accessible medium that people can connect with, on a level that is perhaps deeper than scientific facts can penetrate.

"My drawings explore moments of transition, turbulence, and tranquility in the landscape, allowing viewers to emotionally connect with a place they may never visit. I choose to convey the beauty, as opposed to the devastation, of threatened places. If people can experience the sublimity of these landscapes, perhaps they will be inspired to protect and preserve them."

Guess what? Forman's work includes a series of drawings that served as the set design for the classic ballet Giselle, which premiered in 2012 at the Grand Theatre in Geneva, Switzerland. Ten of her drawings were also used in the set design for House of Cards, a Netflix TV series.