If Athens was the paradigm for representative democracy with its citizenry committed to equal rights for all male citizens, Thebes was the polis, or city-state, at the other end of the political spectrum. In the ages before Athenian democracy emerged in 510 BCE, Athens, Thebes and many other poleis were ruled by local, small groups of land-owning aristocrats who legislated for, decided legal disputes within and governed over their communities. The Greeks referred to these members of the ruling class as the oligoi – “the few” – and their rule became described as an oligarchia, or “rule of the few” (an “oligarchy,” of course). Whereas Athens and, later in the 5th century, other poleis rejected oligarchic rule and embraced the rule of the citizenry – demokratia, or “power in the hands of the demos (the people)” – city-states like Thebes remained under the control of oligarchs for much of their history (so was the case with Sparta, Athens’ erstwhile ally in the Persian wars and, for most of the 5th century BCE, Athens’ bitterest rival). 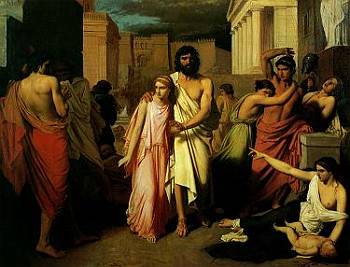 Like Athens and her oversight of the territory of Attica, Thebes controlled the region of Boeotia (pronounced “Bee-OH-sha”), whose southern borders abutted northern Attica. Hence, two governments diametrically opposed in their political philosophies were neighbors, and this proximity only contributed to their on-going antipathy towards each other. If Athens could look to any specific action by Thebes for a casus belli – a rationale for war – she needed only to refer to the medizing of Thebes in the Persian wars of 499-479 BCE. By the time of the last and greatest Persian assault on the Greek mainland in 481, Thebes had abandoned the Greek cause and sided with the Persians – which the Greeks referred to as “medizing,” for “the Medes” was interchangeable with “the Persians.” For any polis to support the barbarian enemy was tantamount to treason, despite the lack of political unity in Greece, and the Athenians despised the Thebans for their betrayal. In fact, one Greek polis in Boeotia – the city-state of Plataea (“Pla-TEE-ah”) – fought alongside the Athenians in a number of the battles with Persia, and served as a stark reminder of the traitorous action of the Boeotian Thebans on the other side of the battle line. When in 431 at the outbreak of the Peloponnesian war – between Athens and her allies (including Plataea), and Sparta and her allies (including Thebes) – the Thebans exacted vengeance for Plataea’s alliance with Athens by destroying the city.

Back to 479 BCE. After the Persian wars, the level of animosity between Athens and Thebes escalated, resulting on a number of occasions in outright war but on battlefields geographically removed from the two great city-states. By ca. 441, the year of Sophocles’ production of the Antigone, Athens and Thebes were at a stalemate, though it would not take much to provoke an outbreak of hostilities. They had just concluded a series of battles not much more than a decade before, and although warfare had ceased their hostility towards each other had not cooled.

So, when we read a play like the Antigone set in Thebes, we need to remember that the climate in Athens towards Thebes was antagonistic, hostile and disapproving. The Athenians had long memories, and for them the polis of Thebes represented everything politically that they had rejected. Sophocles, drawing upon the mythological traditions surrounding the house of Creon, creates for us not an oligarchy but a hereditary monarchy; nonetheless, an audience of Athenians would quickly recognize in Creon an authoritarianism that smacked of non-democratic decision making. The Athenian audience would be hard-pressed to feel sympathetic towards the plight of a Theban ruling class, and so Sophocles could use the political climate to his advantage in advancing the mythological storyline.