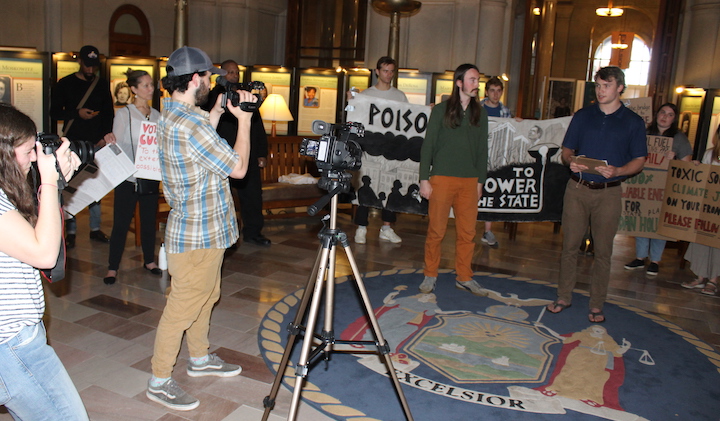 MDOCS connects faculty, students, and courses to off-campus partners, seeding collaboration and enriching its work with civic engagement. Thanks to the generosity of a Skidmore Presidential Discretionary Fund and donations from Trustee Barbara Kahn Moller, the collaborative launched a new initiative in community co-creation in Fall 2019. This initiative aims to deepen public discourse and encourage ethical co-creation across campus with a diverse array of off-campus partners, in Saratoga Springs and beyond.

The initial projects in this initiative include support for the North American and Saratoga local premieres of How To Tell A True Immigrant Story (a 360˚ VR documentary film created by MDOCS Storytellers' alums in partnership with the Saratoga County Economic Opportunity Council's Estamos Aqui photography program); and production and presentation of a multi-media exhibition telling the story of an Environmental Justice community in Albany, NY and their fight to stop the expansion of a fracked gas-burning power plant (pictured above). Learn more about these projects here.

In addition to these off-campus collaborations, MDOCS also continues to support the Skidmore Saratoga Memory Project, a web-based oral history archive initiated by MDOCS' inaugural director Jordana Dym, which captures, presents, and preserves stories of the College itself, as well as various Saratoga communities and organizations. Learn more about the collections that make up the SSMP here.