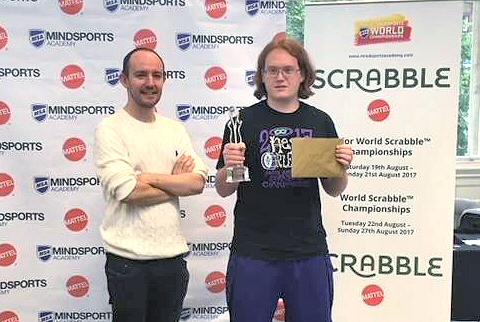 If you ask Matthew O'Connor '20 how his summer went after his first year at Skidmore, he'll just tell you that it was successful. Fact is, it was world-class successful. Coming home from England with £1,000 in his pocket, O'Connor began his sophomore year as a global Scrabble champion, having won the 2017 MSI Junior World Scrabble Championship, August 19–21, in Nottingham, UK.

O'Connor was one of four competitors who represented the United States at the tournament, and all of them finished in the top 20. He took first place with a 20-4 +2,236 record and a 15-game winning streak. Heading into the tourney, he says, he'd spend three to four hours each day studying and practicing.

He knows that drill, because he has already participated in more than 130 tournaments around the world and taken home 32 trophies. "I have been playing Scrabble against my mom since I was 4," O'Connor explains, "but I started tournaments when I was 8. I won a couple of youth events, and then started winning Division 1 tournaments in 2013."

His "junior" classification will last until his 21st birthday, when he will move into the unrestricted World Scrabble Championships, vying against even more experienced players.

Skidmore presents StartUp Skidmore
The Feb. 17-19 workshop and competition — open to all Skidmore students from all majors — will enable participants to fine-tune their business pitches and develop a prototype for their own creative products and ideas.
END_OF_DOCUMENT_TOKEN_TO_BE_REPLACED
Jan 20 2023

Four seasons of Skidmore: 2022 in review
2022 saw the return of many beloved traditions to campus and marked the start of a yearlong celebration of the College’s Centennial, giving us all reason to pause and reflect on Skidmore’s past, present, and future.
END_OF_DOCUMENT_TOKEN_TO_BE_REPLACED
Dec 15 2022
More News