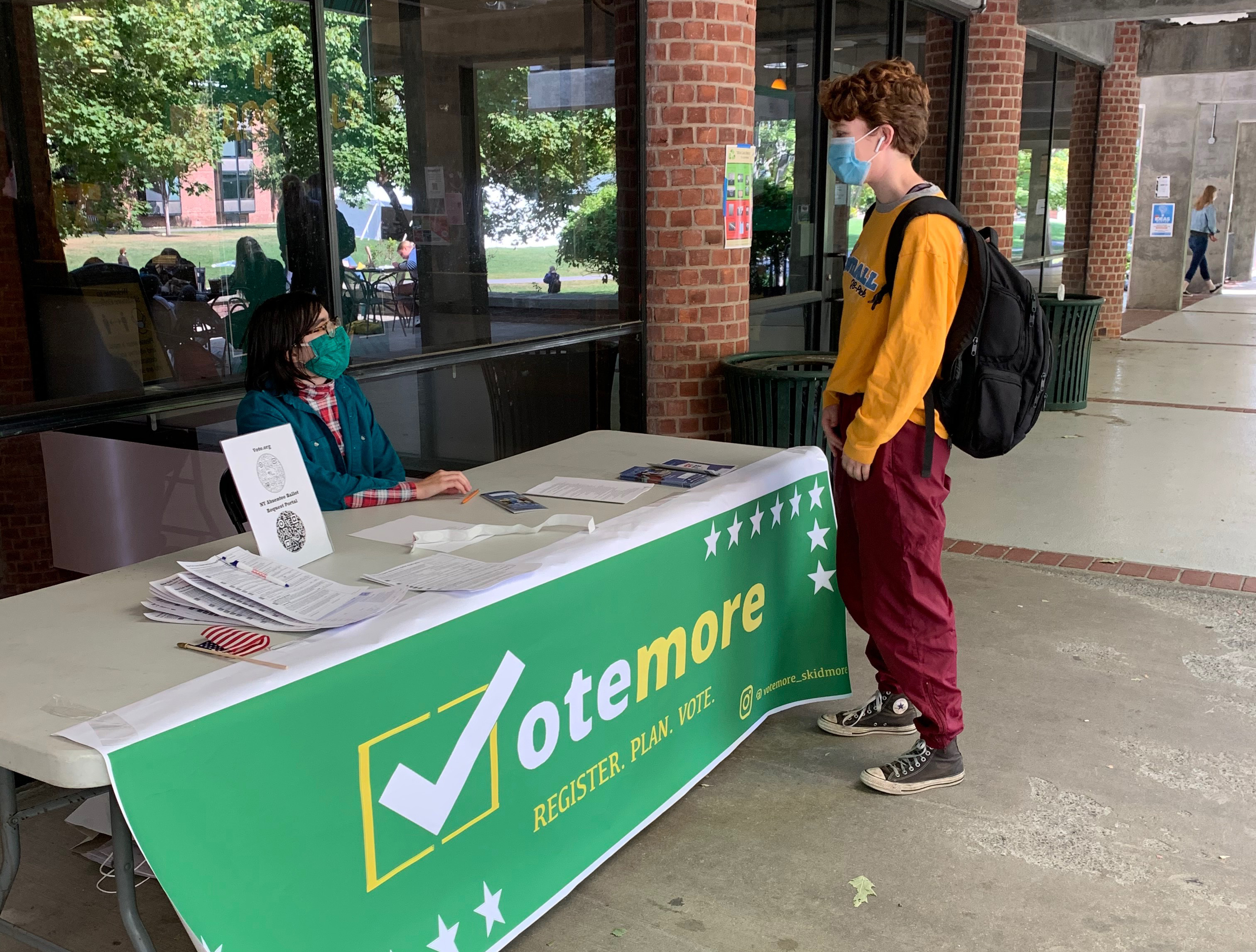 Quinn Campbell ’21 speaks to Abby MacDonald ’22 about voting at a Votemore table in September.

In person and by mail, members of the Skidmore community cast their votes and voiced their views on a historic U.S. presidential election and the direction of the country.

Some students living on campus, including some first-time voters, made their selections for president and other offices and issues in an official City of Saratoga Springs polling place set up in Case Center on Nov. 3. In line with record absentee and early voting across the country, many others opted to cast their votes early or by mail.

“It feels good. It feels like I’m making a difference,” said Sydney Penn ’22, who voted by absentee ballot and was participating in a presidential election for the first time. “I think voting is really important because it means you have a say in what is happening in the country.”

Throughout this semester, many Skidmore classes have been probing the historic nature of the contest between the Republican incumbent, President Donald Trump, and his Democratic rival, former Vice President Joe Biden.

Assistant Professor of Political Science Chris Mann’s senior-level Election Research course was examining the intricacies of mail-in voting across the United States, while Assistant Professor of Marketing Minita Sanghvi’s first-year Scribner Seminar was using the Tang Teaching Museum exhibition “Never Done: 100 Years of Women in Politics and Beyond” to discuss gender and politics.

Both Mann and Sanghvi participated in a discussion of what to expect as returns trickle in on election night — one of multiple election-related events organized this semester by the Tang.

Senior Richie Romero ’21, a political science and economics double major, said casting his vote offered him a sense of empowerment.

“This is the political science coming out of me, but it’s important to make sure that democracy is maintained. If you don’t vote, democracy will slowly start to fade away,” Romero said. “Although it’s not great that the pandemic happened, I guess it brought more awareness about voting and the election.”

As part of efforts to encourage active and informed engagement, the College created a website compiling election-related events on campus, and providing information about voting and other resources for the public.

“It is our hope that more citizens participate in the political process, especially by voting,” President Marc Conner said, adding that diversity of opinions and ideas was central to the College’s liberal arts mission.

Organizations like the student-run Votemore group also encouraged members of the Skidmore community to participate in the election.

“It is especially important that college campuses have a nonpartisan voting resource for students to turn to, as many students have never voted and just need some help to get started,” explained Sydney Kass ’23. “Our vote is our voice, and college students have a lot to say … I think we ought to use our votes to shape a world, a country, a state that we will be proud to live in and become a part of post-Skidmore.”

Valeria Santangelo ’22, who mailed in her ballot, said voting the first time was a bit overwhelming.

“I am glad I have done my part,” she said. “Voting is one of the most  basic things to allow people’s voices to be heard.”