by PRESIDENT PHILIP A. GLOTZBACH

By Megan Rogers, reporter for the Albany Business Review

Glotzbach, who has led the private, liberal-arts college in Saratoga Springs for more than a decade, is a forward-thinking history buff. At the same time, he’s focused on raising funds for a $100 million science center to train scientifically literate graduates.

He’s also focused on moving the conversation about the value of higher education beyond campuses being mere training grounds for jobs.

Had you always planned to be in academia?
When I was an undergraduate, I decided to go into philosophy. If I hadn’t gone this way, I probably would have gone to law school. I settled on this career path pretty early. I wanted to be a professor.

You were in the classroom recently, talking with students about their assigned summer reading, What Money Can’t Buy: The Moral Limits of Markets. One takeaway for you?
So many of the conversations about the “value” of college are about what jobs your graduates get after school and what is the salary level of those jobs—with the implication being that’s the principal way of determining the value of a college education. I think jobs are very important and people need to make a living wage and to do well economically. But there are other values also served by colleges and universities that are not reflected in that market-based conversation.

What are some of those values that are missing from the conversation?
One of the things I think students should be getting from a college education is an enhanced capacity to fulfill their human potential, to appreciate art, music and literature.

How has education provided that in your life?
I took a psychology class that introduced me to that field and changed part of my professional work. I took an art history course and that exposed me to the scope of Western art and gave me the opportunity to appreciate and understand art works in that tradition in ways I hadn’t before. I took a number of literature courses. I was almost an English minor. We didn’t have minors, but I would have been an English minor. Those courses were important to me because I do believe an educated person needs to read widely and literature is part of that.

Are you reading any particularly good books right now?
I’ve been reading more about World War II just because of the anniversary of D-Day. I’m reading part of the biography of Winston Churchill called The Last Lion, by William Manchester. I’m reading more in history these days than I am in fiction. I usually have a couple of books going.

When you first came to Saratoga Springs, what about Skidmore appealed to you?
Our motto is “Creative Thought Matters.” I was very excited about the possibility of working with a school that took that idea seriously. You hear a lot about creativity these days, but 11 years ago, not so many schools were talking about that.

Also, Skidmore was definitely future-oriented, and that appealed very much. It seemed to be a place that was receptive to new ideas, and there was a great amount of creativity and strength in the school.

What was one future-oriented idea you brought to Skidmore?
One thing I came in with was my belief that scientific literacy is central to liberal education and that schools needed to be thinking about that in new ways. One of the things we do here is look for connections in the disciplines, between science and art or science and business.

What are some accomplishments you’re most proud of? What are the major ways the college has evolved
We’ve seen a major evolution of the physical plant. We renovated every single residence hall and we’ve created two new residential complexes. We’ve increased financial aid from $16.5 million a year to $43 million a year. We’ve managed to keep the average net cost to students stable over the period of time, even though tuition fees have increased. And we’ve really changed the admissions profile.

Last year, we received 8,672 applications. That represents a 50 percent increase over two years. Over this time, Skidmore College has become better known nationally. The “Creative Thought Matters” phrase has been a part of that. The phrase resonates with people. It’s an important part of our value proposition.

When you’re not at Skidmore, how do you relax?
I like to read. I like to watch films. I tend to like films that have a historical component, like Gettysburg or Apocalypse Now. Slumdog Millionaire is also a favorite film. I also play golf and I want to learn to do that better. That’s a good way to relax and do something that’s very different from this job.

DNAWORKS performance and discussion
Please join us for the presentation of HaMapah/The Map, and for the campus-wide discussion.
END_OF_DOCUMENT_TOKEN_TO_BE_REPLACED
Sep 21 2016 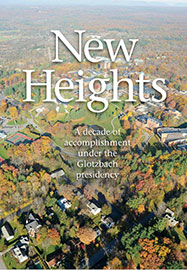 New Heights
A decade ago, Philip Glotzbach and wife Marie headed out on a cross-country drive from Redlands, Calif., to Saratoga Springs, N.Y.
END_OF_DOCUMENT_TOKEN_TO_BE_REPLACED
Sep 15 2013

Welcome to the 2019-2020 academic year
On behalf of our entire College community, I am pleased to welcome you to a new academic year.
END_OF_DOCUMENT_TOKEN_TO_BE_REPLACED
Sep 3 2019