“Over the next 2 years SITI Company is transitioning to become a resource center for individual artists and for companies, and to remain a lighthouse for the art of ensemble.”  -Anne Bogart

SITI Company was founded in 1992 as the Saratoga International Theater Institute by Anne Bogart, Tadashi Suzuki and a group of like-minded artists interesting in redefining and revitalizing contemporary theater in the U.S. through an emphasis on international cultural exchange, creation of new work, and the training of theater artists. Originally envisioned as the Saratoga International Theater Institute (SITI) in Saratoga Springs, New York, SITI went on to establish itself in New York City and expanded to a year-round season while creating new work, touring, and cultivating the next generation of independent theater artists through their training programs. The summer of 2021 will be the Company’s 29th annual summer season in Saratoga.

The Company is known nationally and internationally as a top-level artistic collective that generates groundbreaking theater while training artists from around the world. SITI and its members have received numerous honors, including the Fox Foundation Fellowship for Distinguished Actor, Obie, Drama Desk and Eddy awards. SITI has created more than 47 productions that have been presented at venues around the world. Many of the Company’s productions and creative partnerships have taken root during their summer residencies at Skidmore, including collaborations with the Martha Graham Dance Company, Bill T. Jones/Arnie Zane Dance Company and STREB Extreme Action. SITI and STREB’S 2019 production of FALLING & LOVING, based on the works of Charles L Mee, began when the artists were in residence at Skidmore, and the piece premiered at Peak Performances (Montclair State University) to brilliant reviews. Watch FALLING & LOVING online thanks to a partnership between Peak Performances and WNET’s ALL ARTS.

In the fall of 2020, SITI Company announced the SITI Legacy Plan, which includes a finale 30th anniversary season and the creation of a robust physical and digital archive. At the conclusion of the finale season, anticipated to be the Fall of 2022, SITI Company will cease to operate in its current iteration as a touring, teaching, performing ensemble with an administrative staff and a studio. Some SITI Company members, including renowned director Anne Bogart, will continue to work on theatrical projects together and separately, in addition to teaching and licensing SITI Company works.

Read more about the SITI Legacy Plan and the New York Times article by Sarah Bahr. 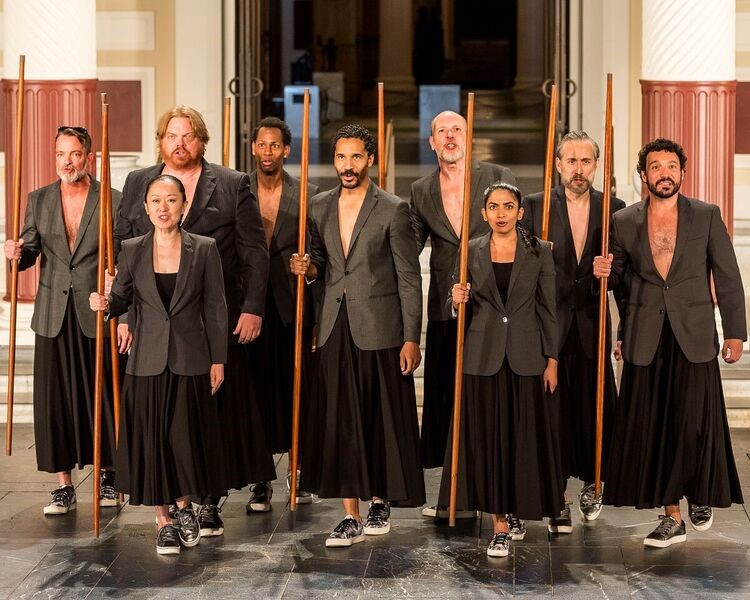