Saratoga Center for the Family is an agency that serves children who are victims of domestic violence, neglect, and other forms of abuse. That important work faced a setback on May 5, 2013, when the center was engulfed by a fire that completely demolished the basement containing its Child Advocacy Center. 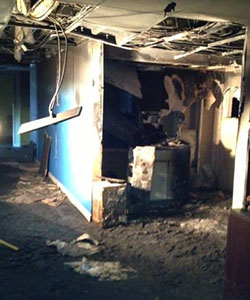 The Family Center’s entire staff was temporarily relocated to Nolan House, part of the Presbyterian New England Congregational Church on Circular Street, but was able to return to its original location on Ballston Avenue four months later, with the help of funds raised by local restaurants.

Although the walls in the renovated Child Advocacy Center had been painted with bright colors, there was something missing, and that caught the attention of Rene Alpert ’15, who began an internship at the Center for the Family in January 2014. She knew that a comforting mural created by Skidmore students had existed before the fire, and she was eager to replace it.

To get things rolling, Alpert reached out to Skidmore Pro Arts, a campus club dedicated to the fine arts, by contacting Pro Arts member Lily Reinhold ’15, a studio art major. Reinhold enthusiastically enlisted the help of other Skidmore artists, and soon the group started to blueprint the images during club meetings while keeping in mind the suggestions of a cityscape theme from the kids at the center.

Said Reinhold, “We wanted to create an image that was calming and comforting for children when they came in, one that reflected a community and all the possible interests that a child might have.” 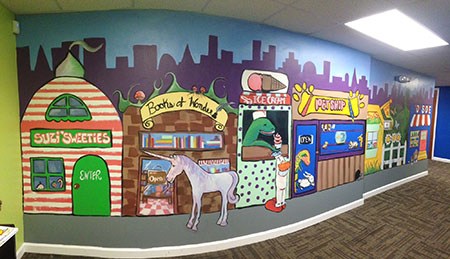 The new mural brightens things up.

Painted with hues that conjure up the nostalgia of classic carnival games, the mural stands warm and welcoming in the center’s waiting room. A pink and white striped sweet shop cheerfully resides next to a bookstore. A unicorn stands beside the bookstore entrance, the floor of which is plaid pink and leads to a haven of books. Next door, a grinning green dinosaur serves a swirl of ice cream to a tiny clown out of a mint green ice cream stand spotted with plum purple. Adjacent is the pet shop. Rows of toys can be seen through the window of a bright blue toy store.

“The mural is what brings everything together. We bring the kids over to the mural and it instantly makes them feel comfortable,” said Child Advocacy Center Coordinator Jennifer Wormley.

The center’s website gives a strong endorsement of the project: “Losing our Child Advocacy Center after the fire was devastating, not only because of the significance of that space, but because of the special mural artwork on the walls that would be lost forever. Our dear friends from Skidmore College’s Pro Arts club came by and donated their time, energy and incredible artistic talent to make our CAC a truly magical place for children. They are unbelievable!”

The walls at the Child Advocacy Center are soon to be filled with more Skidmore art. Busby and Stone expressed excitement about a new mural they are planning to create this spring 2015 semester.

Skidmore donates additional protective gear to hospital
Skidmore College has donated thousands of gloves and other protective gear to Saratoga Hospital to boost the local community's capacity to deal with the COVID-19 outbreak.
END_OF_DOCUMENT_TOKEN_TO_BE_REPLACED
Mar 27 2020

With compassion, Skidmore responds to COVID-19
The Skidmore community has come together with kindness and determination in response to the global health emergency.
END_OF_DOCUMENT_TOKEN_TO_BE_REPLACED
Mar 20 2020
More News