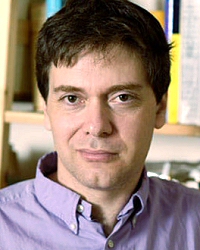 A guest lecture on the 17th-century philosopher Spinoza will address his alleged atheism and will discuss ideas of the divine and the human. The event is Wednesday, Feb. 22, at 7:30 p.m.

The charge of atheism was brought against Baruch Spinoza by both his Christian contemporaries in the 1600s and some of his 18th-century readers, and in modern times he became rather a cult figure for his alleged atheism. That's how Yitzhak Melamed, professor of philosophy at Johns Hopkins University, sets up his "Spinoza's 'Atheism'" lecture, to be held Wednesday, Feb. 22, at 7:30 p.m. in Skidmore's Davis Auditorium in Palamountain Hall. The free, public lecture will be introduced by Skidmore philosophy professor William Lewis.

Melamed will argue that "Spinoza deserves neither the praises nor the condemnations bestowed upon him, and that the view of Spinoza as an atheist relies on a narrow-minded conception of the divine in anthropomorphic terms." While at Skidmore, Melamed will also visit Prof. Larry Jorgensen's philosophy seminar to read Spinoza's Ethics with students.

A philosopher, historian of science, and religion scholar, Melamed has written and edited two books on Spinoza. He has earned Fulbright, Mellon, National Endowment for the Humanities, Humboldt, and other grants and fellowships for his scholarship.

His will be the first of three Spinoza-focused lectures this semester as part of the Jacob Perlow Series at Skidmore.

A front-row seat to history in London
Skidmore London First-Year Experience students find themselves at the center of a remarkable moment in history following the death of Queen Elizabeth II and accession of King Charles III.
END_OF_DOCUMENT_TOKEN_TO_BE_REPLACED
Sep 16 2022

The start of a new century
Skidmore College is marking its College Centennial with a yearlong celebration of its history and reflections on the journey ahead.
END_OF_DOCUMENT_TOKEN_TO_BE_REPLACED
Sep 14 2022