He shared this philosophy with Skidmore's Class of 2019 as an honorary degree recipient at the College's 108th Commencement Exercises, and in a recent interview he reflected on the value of a liberal arts education and recalled fondly a summer visit he paid to Saratoga Springs years ago.

Torre, who led the New York Yankees to four World Series championships as their manager from 1996 to 2007, is also known for establishing a foundation that provides safe havens for abused women and children. He overcame professional and personal challenges to achieve success on and off the field.

During an interview at Skidmore's Zankel Music Center the evening before Commencement, and again during his remarks at the May 18 ceremony at Saratoga Performing Arts Center, Torre imparted some of the wisdom he's gained along the way.

For one, you have to have creativity to take part in the game of life, he said May 17 during a sit-down with Skidmore Athletic Communications Manager Nate Smith. "Liberal arts gives you that freedom to be a little more expressive, and to me, that's got to benefit you, because once you get out there on your own, take the safety net away, you're going to have to make some decisions."

Another key lesson: "Don't be afraid of failure," he told a captive audience of graduates at SPAC. "You're going to have to learn from your setbacks, and that's where life's experiences come in. It takes character — actually, it builds character. It makes you stronger." 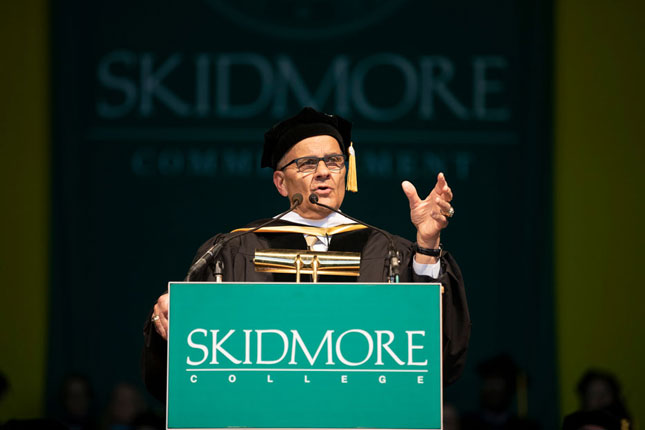 Joe Torre addresses the Class of 2019 during Skidmore's 108th Commencement Exercises on May 18 at Saratoga Performing Arts Center.

Torre, who grew up with baseball, managed his first major league game when he was 36. He managed his first World Series game when he was 56. And "a lot went on in between," he told the Class of 2019. He managed and played for the New York Mets, St. Louis Cardinals and Atlanta Braves — and was fired by all three teams — before achieving career-defining success with the Yankees.

Torre also grew up in a domestically violent home. His father was physically abusive to his mother, and though he didn't suffer any physical scars, it took a psychological toll. It wasn't until he sought counseling that he realized how living in fear had eroded his self-esteem and caused him to withdraw from others. It was his motivation for starting the Safe at Home Foundation with his wife in 2002, and Margaret's Place, named after his mother, to help children cope with the trauma of domestic violence and abuse.

In his Commencement address, Torre emphasized the importance of support — from home, from a friend, from your community — in navigating the challenges of life. "Baseball is a team sport," he said. "You need one another to get through tough times. Life is a tough sport, and it's tough to go through life alone, so that's a team game also."

And finally, Torre, expressing optimism for what Skidmore's graduates will accomplish for the future of our country, stressed that they don't have to climb the mountain all at once. "Think small and big things will happen," he said.

Torre also quoted one of his own heroes, Babe Ruth, in relaying, "It's hard to beat a person who never gives up."

"If you go forward with a spirit of hard work, teamwork and the creativity instilled in you here at Skidmore, then I believe that you will be successful no matter what you choose to pursue in life. In fact, I bet on it. After all, you are Thoroughbreds."

Skidmore honors graduates during live Commencement
Skidmore conferred 647 degrees in a live, virtual Commencement ceremony on Saturday, May 30.
END_OF_DOCUMENT_TOKEN_TO_BE_REPLACED
May 30 2020

Congratulations to the Class of 2020
Economics, history and psychology professors, deans, advisers, administrative assistants and even Doodles the dog send their best wishes to graduates.
END_OF_DOCUMENT_TOKEN_TO_BE_REPLACED
May 30 2020
More News