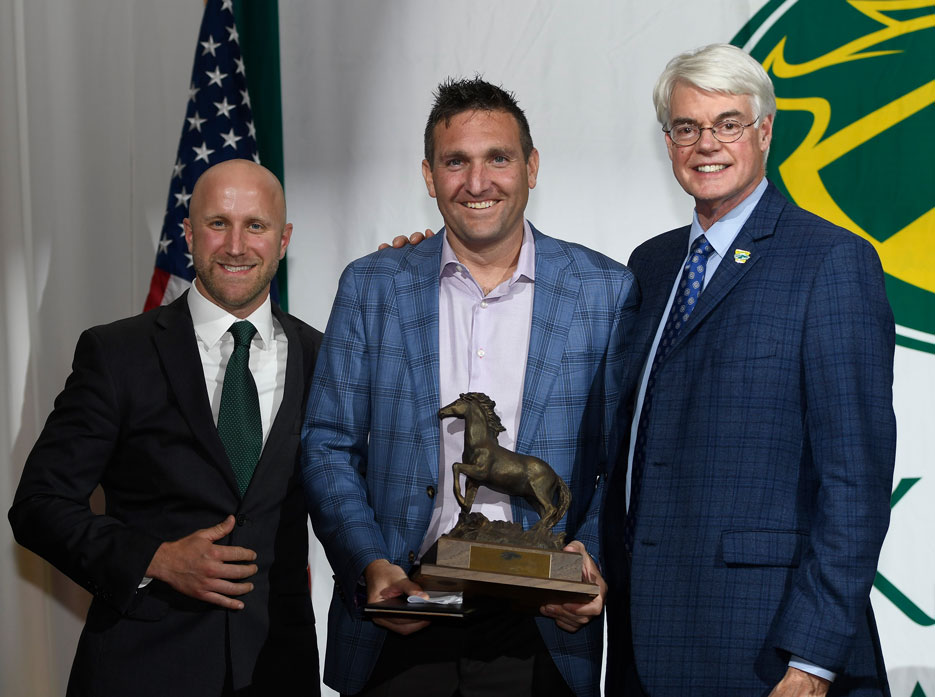 Peter Conlin '98, center, is flanked by the men's hockey coach, Robert Hutchison, left, and President Philip A. Glotzbach at the Friends of Skidmore Athletics Benefit and Hall of Fame Induction Ceremony.
by Peter MacDonald

The induction of four student-athletes, President Philip A. Glotzbach and two teams of distinction into the Skidmore Hall of Fame, a record $160,000 raised to benefit Athletics, and a lot of love and gratitude were some of the highlights of the 16th annual Friends of Skidmore Athletics (FOSA) Benefit and Hall of Fame Induction.

The event was part of Skidmore's 2019 Homecoming weekend, during which all of the College’s fall varsity teams were victorious — field hockey (4-1 over William Smith College), men’s soccer (2-0 over Vassar), women’s soccer (3-1 over Vassar) and volleyball (3-0 over Lasalle). 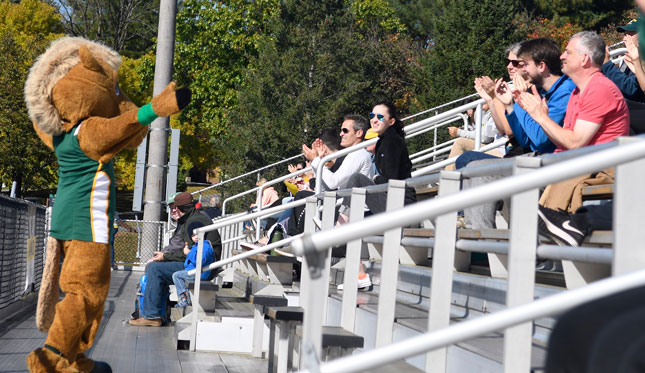 Skids engages the crowd at a Homecoming game.

“The presence of our Hall of Fame in the Williamson Sports and Recreation Center lobby sets the tone for great expectations,” Gail Cummings-Danson, assistant vice president for student affairs and director of athletics, told the full house of former and current athletes and coaches, their families and friends, FOSA members and other fans who attended the induction ceremony Oct. 5 in Williamson Sports Center. 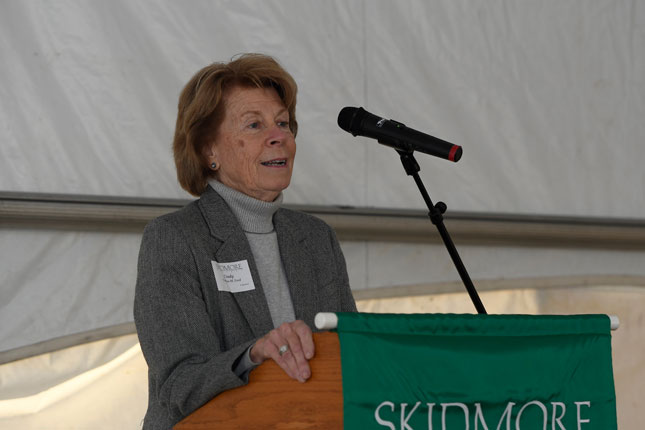 He then focused on the word “persistence.” He recalled how the 2013 riding team roared back from a seven-point deficit to tie St. Lawrence and become co-national champion and how the 2010 men’s basketball team outlasted Southern Vermont 128-123 in a seven-overtime game, the longest game in NCAA Division III history.

“Persistence is when you refuse to quit,” said Glotzbach. “These are lessons that will be carried with you the rest of your lives.”

T’Bred accomplishments: Conlin’s defensive and offensive prowess (top 10 in all-time scoring) helped men’s ice hockey capture three of four consecutive ECAC South regular season titles (1994-1997) and usher the program into the powerful ECAC East. In soccer, he was MVP and UCAA first-team all-star in both 1997 and 1998.

Quote-unquote: To his numerous teammates who came to Saratoga to celebrate his induction: “Thanks, guys. I wouldn't be here without you – during the good times and the bad … I remember those holiday breaks here on campus. Just us guys, eating steak dinners and playing hockey. How good is that?”

Quote-unquote: “I want to acknowledge my teammates. You not only shape who I am but who I believe myself to be. You see who I am but make room for who I want to be. Thank you for giving me access to love and to belonging.”

T’Bred accomplishments: Herman Simon is a four-time New York Women’s Collegiate Athletic Association Defensive Player of the Year and a three-time American Volleyball Coaches Association All-America selection (2003-2005). She is sixth in the NCAA Division III record book for career digs. (A dig is a pass of a hard-driven ball from the other team, often a diving save of a ball about to hit the floor.)

Quote-unquote: “I remember a simple hug that coach Hilda (Arrechea) gave me when I returned for my sophomore year. It reminded me that I was not alone. There is love at the core of what she and coach Jerry [Rodriguez] do … I’ve got two daughters ... I want them to create deep and meaningful relationships, which I got to do because of the community I walked into here, the community that is Skidmore volleyball.”

T’Bred accomplishments: DeJohn led the Thoroughbreds to four consecutive league championships (2007-2010). He is a two-time Liberty League Player of the Year (2009 and 2010) and a three-time Golf Coaches Association of America first team All-American (2008, 2009 and 2010). During his career, he won nine individual tournament titles and averaged 73.7 strokes per match.

Quote-unquote: “I want to thank my teammates. Golf is a sport with an interesting team dynamic. We spent a lot of time trying to beat and out-position each other. And yet, they are my closest friends … Being a Skidmore athlete is one of the most important things in my life.”

T’Bred accomplishments: During his time as Skidmore’s president (2003-present), Glotzbach has overseen large-scale renovations to athletics facilities, major upgrades to Wagner Park, Wachenheim Field and Valentine Boathouse. Increased funding has ensured that all varsity teams have full-time head coaches and more full-time and part-time assistant coaches. Under his watch, the Thoroughbred Society was launched, and the Hall of Fame was established.

Quote-unquote: “I’m humbled, honored and deeply grateful. It’s an honor to be in this company.”

Quote-unquote: Elizabeth Kigin ’10, team captain: “On behalf of our team, I’m proud to be a small part of the program Cindy Ford has built here. She taught us so much — as they say, ‘It’s built Ford tough.’ She taught us confidence and leadership, not to be afraid to make mistakes, kind of like trust falls on blind dates. No big deal. Along the way, we became family.”

T’Bred accomplishment: The 2010 baseball team set a program record with 30 wins on the way to a 30-15 record that included 16 Liberty League victories and the Liberty League Championship. The Thoroughbreds were ranked as high as second in NCAA New York Region. The pitching staff led NCAA Division III in lowest hits allowed per 9 innings (7.6) and was second in earned run average (2.88). Ron Plourde was ECAC Coach of the Year, and the Liberty League named the Skidmore coaches as the Coaching Staff of the Year.

This year the Friends of Skidmore Athletics raised more than $160,000 to benefit Skidmore athletics, a record. The women’s lacrosse team topped women’s varsity teams, raising $11,301, while the men’s baseball team outpaced their counterparts, raising $21,075. The women’s riding team weighed in with the most donors, 71, while men’s lacrosse came through with 97 donors.

Skidmore honors graduates during live Commencement
Skidmore conferred 647 degrees in a live, virtual Commencement ceremony on Saturday, May 30.
END_OF_DOCUMENT_TOKEN_TO_BE_REPLACED
May 30 2020

Congratulations to the Class of 2020
Economics, history and psychology professors, deans, advisers, administrative assistants and even Doodles the dog send their best wishes to graduates.
END_OF_DOCUMENT_TOKEN_TO_BE_REPLACED
May 30 2020
More News