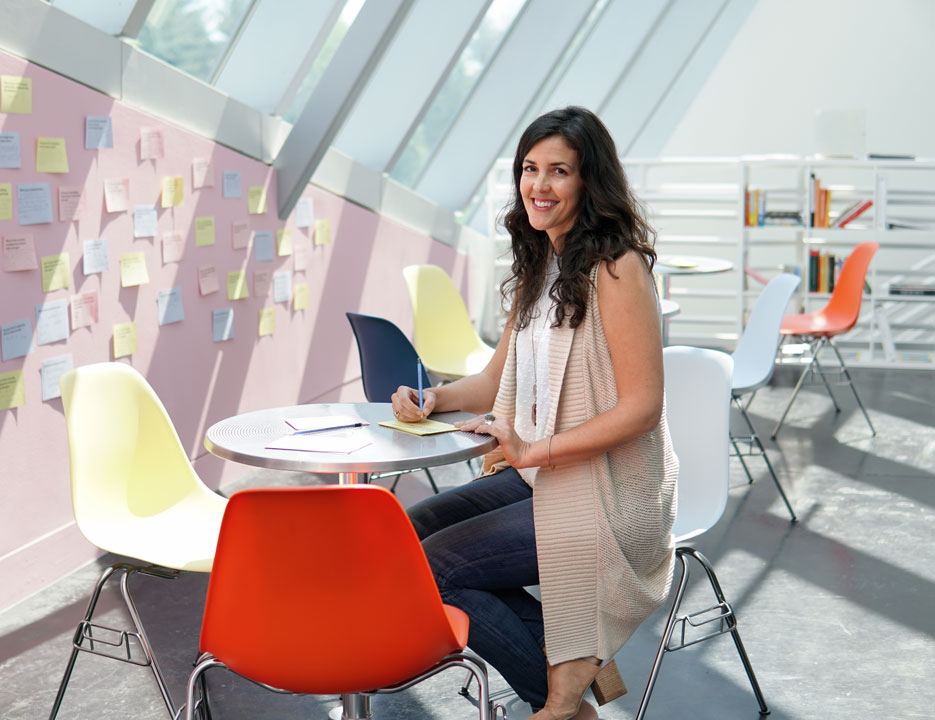 Kristen Carbone ’03, seen here at the Tang Teaching Museum in June, was an art history major at Skidmore. As a breast cancer previvor she was inspired to launch Brilliantly, an online platform that supports other breast cancer previvors and survivors, and she soon plans to release a tech product to help those who have undergone a mastectomy.

After studying art history and education at Skidmore College, Kristen Carbone ’03 went to work curating exhibits at top museums throughout the Northeast, including at the Tang Teaching Museum and Art Gallery.

Little did she know she would become a tech entrepreneur with her hand in manufacturing, marketing, science and engineering.

Her unexpected journey began in 2005, after her mother died of metastatic breast cancer. Years later, Carbone discovered she had a strong genetic risk for the disease, too. With the goal of preventing cancer, Carbone had a double mastectomy and silicone implant reconstruction in 2013. As she navigated the emotional and physical side effects of her new body — like feeling cold all the time due to a lack of insulating breast tissue — she found herself wanting to connect with other breast cancer survivors and previvors like herself.

After conversing with others online, Carbone learned she wasn't alone in feeling cold. With the help of a friend, Carbone started thinking about the potential for manufacturing a wearable warming device to help with this problem.

“While I was confident my idea could work, I didn’t have the engineering expertise to make anything other than the proof of concept garment,” Carbone said. She did weeks of market research and sought advice from her most accomplished friends, many of whom she met at Skidmore. She even reached out to Skidmore alumni she didn’t know to get advice about topics like market penetration rates.

In 2017, Carbone launched Brilliantly, an online platform that aims to meet the long-term physical and emotional needs of women who’ve had an experience with breast cancer. The company is now developing a warming bra insert that fit into almost any bra. They're made from conductive ink sandwiched between two thin pieces of fabric and controlled by an Oreo-sized pod that goes in the bra band and connects to a phone app.

“When I stumbled into being an entrepreneur, it was my background in the arts that was the foundation for setting and accomplishing goals to pave the way for Brilliantly,” Carbone said. “Being brought up through a culture of critique, critical and creative thinking is the only way to survive the intense upward climb of starting a company.”

Although entering the wearable tech market is not something she ever imagined doing as an undergraduate, she has always had an appreciation for science and medicine, and Skidmore gave her the fundamental tools to navigate unfamiliar territory.

It has been a long road getting her product to market, and Carbone says she couldn’t have done it without her Skidmore network and education. “My greatest successes are tied directly to Skidmore,” she said.

Skidmore donates additional protective gear to hospital
Skidmore College has donated thousands of gloves and other protective gear to Saratoga Hospital to boost the local community's capacity to deal with the COVID-19 outbreak.
END_OF_DOCUMENT_TOKEN_TO_BE_REPLACED
Mar 27 2020

With compassion, Skidmore responds to COVID-19
The Skidmore community has come together with kindness and determination in response to the global health emergency.
END_OF_DOCUMENT_TOKEN_TO_BE_REPLACED
Mar 20 2020
More News