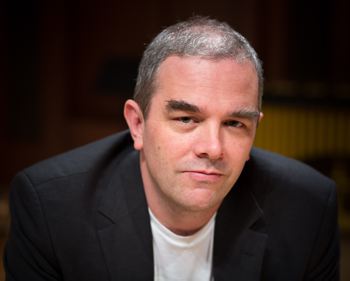 Born in Stamford, Connecticut in 1970, DAVID BRUCE grew up in England and now enjoys a growing reputation on both sides of the Atlantic. Bruce's music draws on the wild dances and heart-felt laments of gypsy music, flamenco, klezmer and other folk traditions, as well as having a direct connection to composers like Stravinsky, Janacek, Berio and Bartok who shared similar passions. Often witty and always colourful, pulsing with earthy rhythms, Bruce's music has a directness rarely heard in contemporary music, but also contains an emotional core of striking intimacy and sensitivity. Since the premiere of Piosenki (2006) in Carnegie Hall, Bruce's career in the U.S. has flourished.

Carnegie Hall itself has been a huge supporter of Bruce's music, going on to commission Gumboots (2008), Steampunk (2011) and most recently That Time with You for mezzo-soprano Kelley O'Connor, which premiered at the hall in October 2013. In 2009, Dawn Upshaw premiered the song-cycle The North Wind, commissioned for the gala opening of the Chamber Music Society of the Lincoln Center's 2009 season. For 2013–14 Bruce was associate composer with the San Diego Symphony Orchestra, for whom he wrote three pieces : Night Parade for the orchestra's Carnegie Hall debut in October 2013; the Violin Concerto Fragile Light for Gil Shaham; and Cymbeline, featuring mandolinist Avi Avital. Future U.S. commissions include from Camerata Pacifica for a new work for oboe, harp, cello and percussion.

In the UK, recent commissions include Prince Zal and the Simorgh (2012) for the London Philharmonic Orchestra's BrightSparks series; Fire (2012), one of 20 "20x12" commissions celebrating the Cultural Olympiad; Saudades for long-time collaborators Chroma; the chamber opera The Firework Maker's Daughter (2012) co-commissioned by The Opera Group and ROH2 ; and Nothing, a full-length opera co-commissioned by Glyndebourne and ROH.

Other notable recent commissions include a 35 minute chamber work The Given Note (2011) for violinist Daniel Hope together with the David Orlowsky Trio and cellist Vincent Segal, co-commissioned by the Mecklenburg-Vorpommern Festival, Germany and the Savannah Festival USA; and in 2012, Cut the Rug for Yo-Yo Ma and the Silk Road Ensemble. The piece received its official premiere at Carnegie Hall in October 2013 as part of the ensemble's 15th anniversary celebrations and was toured to numerous high-profile venues around the world, including the Concertgebouw, Amsterdam.

Cut the Rug was recorded for the Sony Classical label and released in December 2013. Other recordings include The Eye of Night, commissioned by Art of Elan in San Diego and recorded by the Myriad Trio; and Gumboots, recorded by Julian Bliss and the Carducci Quartet, released on Signum Records in April 2016.

Bruce's work in opera has attracted particular attention. A series of short operas for Tete a Tete in London culminated in the Genesis Foundation commission Push! (2006), a Critic's Choice for 2006 in both the Telegraph and Classical Music Magazine and received universal critical acclaim. In 2008, Dawn Upshaw instigated the commission for his one-act opera A Bird in Your Ear (2008) for Bard College. 2013 brought Bruce's chamber opera The Firework Maker's Daughter, which toured the UK and New York in Spring 2013. The piece was also shortlisted for both the British Composer Awards and the 2014 Olivier Awards for Best New Opera Production. The Firework Maker's Daughter returned to the ROH Lindbury Studios only two years later, for a 27-performance run in December 2015. The premiere of Bruce's largest operatic work to date, Nothing, based on the award-winning novel by Janne Teller and co-commissioned by Glyndebourne and the Royal Opera House, premiered at Glyndebourne in February 2016. It brought the most intense response yet, with the Independent calling it "a pretty well flawless piece" and the Stage saying, " It's as moving, authentic and thought-provoking an opera you're likely to see for some time." The original production of Nothing is scheduled for repeat performances in Denmark in Feb 2017 as part of the Aarhus European Capital of Culture celebrations.

Bruce's music has attracted numerous awards and prizes, including the Lili Boulanger Memorial Prize (2008) and the Royal Philharmonic Society Composition Competition (1994). He studied at Nottingham University, the Royal College of Music, London, (with Tim Salter and George Benjamin); and completed a PhD in Composition at King's College, London (1995–99), under the supervision of Sir Harrison Birtwistle.

Complementing his work as a composer, Bruce runs the music and technology company Red Balloon Technology Ltd., whose sites include the popular sheet music site 8notes.com and the composers' site CompositionToday.