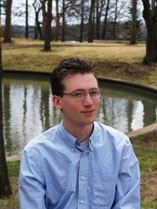 RYAN GALLAGHER is in his fourth and final year of graduate studies at Cornell University as of 2011, where his teachers include Steven Stucky, Kevin Ernste and Roberto Sierra. He received his bachelor of music degree in 2007 from the Juilliard School, where he studied with Christopher Rouse. A native of Wooster, Ohio, he studied composition with his father, Jack Gallagher of the College of Wooster during high school. He has also studied with Samuel Adler and Stephen Jaffe.

His recent compositional interests have led him to write pieces mixing standard ensembles with non-classical instruments, including a work for solo drum set and wind ensemble performed by the Cornell University Wind Ensemble with Derek Roddy as soloist, as well as a concerto for electric guitar, bass, synthesizer and drum set for the Contemporary Youth Orchestra with Electric Kompany as concertante soloists. In April 2010 his orchestral work Grindhouse was publicly read by the Nashville Symphony Orchestra, and the work will be premiered by the American Composers Orchestra in October 2011. Additionally, he has been commissioned by Ensemble ACJW to write a new chamber work to be performed at Carnegie Hall in December 2011.