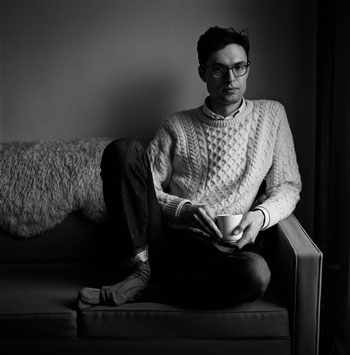 TIMO ANDRES (b. 1985, Palo Alto, Calif.) is a composer and pianist who grew up in rural Connecticut and now lives in Brooklyn, N.Y. His début album, Shy and Mighty, which features 10 interrelated pieces for two pianos performed by himself and pianist David Kaplan, was released by Nonesuch Records in May 2010 to immediate critical acclaim. Of the disc, Alex Ross wrote in the New Yorker that Shy and Mighty  “achieves an unhurried grandeur that has rarely been felt in American music since John Adams came on the scene … more mighty than shy, [Andres] sounds like himself.”

Andres's new works include a piano quintet for Jonathan Biss and the Elias String Quartet, commissioned and presented by Wigmore Hall, Carnegie Hall, the Concertgebouw Amsterdam and San Francisco Performances; a solo piano work for Kirill Gerstein, commissioned by the Gilmore Foundation; a new string quartet for the Library of Congress, premiered by the Attacca Quartet; and a new piece for yMusic. Upcoming commissions include a major work for Third Coast Percussion and an ensemble song cycle to be premiered by himself, Gabriel Kahane, Becca Stevens, Ted Hearne and Nathan Koci at the Ecstatic Music Festival and presented by the St. Paul Chamber Orchestra’s Liquid Music series.

Recent highlights include solo recitals at Lincoln Center, Wigmore Hall, (le) Poisson Rouge, and San Francisco performances; a weekend of performances in Los Angeles, featuring a new work for the Los Angeles Chamber Orchestra and a performance of his re-composition of the Mozart “Coronation” concerto; and performances of Crashing Through Fences by eighth blackbird. Collaborative projects of the past season include a duo program with Gabriel Kahane at the Library of Congress and a world premiere performance of selected Philip Glass Études, alongside the composer, as part of Nico Muhly’s “A Scream and An Outrage” festival at the Barbican.

Timo earned both his bachelor’s and master’s degrees from Yale and in addition to music, he has worked occasionally as a professional graphic and web designer. He is one sixth of the Sleeping Giant composers’ collective and performs regularly with ACME. He has received awards from the American Academy of Arts and Letters, BMI and ASCAP, as well as grants from New Music USA and the Copland Fund.

A new album of his orchestral works, Home Stretch, was released by Nonesuch Records in July 2013.

An avid cyclist, Andres can often be sighted commuting astride his 1983 Mercian.