SHIFT shows how a small group of documentarians adapted and created despite and because of the global challenges of 2020. See first-hand the stunning and diverse works that came from the individuals and teams that made up the first ever virtual MDOCS Stoytellers’ Institute, as well as works created collaboratively using innovative online tools and some more traditional forms of communication.

Glimpse into the world they built together and the creative ways they forged intimacy without ever meeting one another in person.

Join us for Instagram live conversations with artists on the following dates (@mdocs.skidmore):

Under the Stars: Outdoor Screening Series

Mondays @ 7, Outside the Tang Tent

Seating is limited, RSVP on SkidSync (links above) 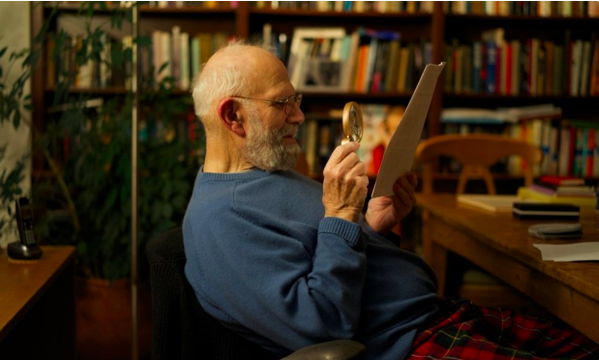 "Oliver Sacks: His Own Life"

Exclusive viewing access to the newly released documentary film, "Oliver Sacks: His Own Life" followed by a post-screening Q&A with filmmaker Ric Burns; Oliver Sacks’ book editor/contributor Kate Edgar; and partner Bill Hayes for a post-screening online conversation hosted on Zoom. RSVP is required to obtain viewing pass for the Virtual Cinema. (Screening is Asynchronous at viewer's convenience before the Q&A)

Oliver Sacks (1933-2015), termed “the poet laureate of medicine” by The New York Times, was a man of infinite compassion, whose scientific and literary accomplishments made him the first public intellectual in the field of medicine and a revered figure. London-born, to an Orthodox Jewish family, and eccentric from his earliest days (his first friend was the periodic table!), Sacks was dogged by homophobia (his mother called him “an abomination”), self-destructiveness (including extensive drug use as a young man), obsessions with swimming, motorcycling, and body-building -- and for many years the hostility of the medical establishment. Ironically, it was the Robin Williams/Robert De Niro Hollywood movie of his book, Awakenings, that led to his acceptance by the scientific community. As an expert in Asperger’s and Tourette’s syndromes, Parkinson’s disease, colorblindness, migraines, and a panoply of rare neurological conditions – Sacks wrote books that turned case histories into compelling stories of living, breathing people. Ric Burns’s documentary, which draws upon extensive interviews with Sacks made just after learning that he is dying, does justice to a fascinating, multi-faceted personality: a great man who was also a profoundly good one.
Presented with support from the Dowd Lecture Series and Skidmore Departments of Psychology, Neuroscience, Media and Film Studies and MDOCS