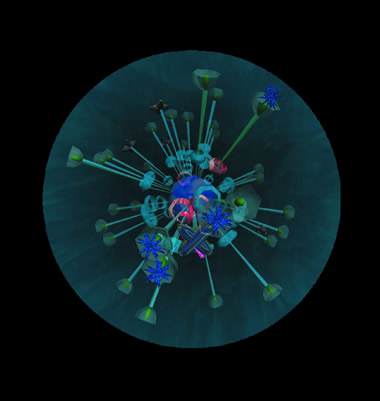 DIGITAL SELECTIONS is an exhibition of prints, installations, web sites, CD-ROMs, computer animation, and video and audio works by artists who employ digital tools in creation, co-presented by the Schick Art Gallery and the New York Digital Salon. An opening reception will take place on Tuesday, April 20th from 6:30pm until 7:30pm. Please note that the gallery and this exhibition will re-open for the summer session from June 2nd through June 12th. Bruce Wands will give a digital art lecture on Wednesday, April 21st at 6:00pm in Emerson Auditorium, (Palamountan Hall) on the Skidmore campus.

The DIGITAL SELECTIONS exhibition was curated by David Miller, Director of the Schick Art Gallery and Bruce Wands, Director of the New York Digital Salon, an international digital art organization that celebrated its tenth anniversary in 2003. Involved with the salon since its inception, Wands was curator of the first three of their annual exhibitions, juror for their fourth and has overseen the entire operation since 1998. He is an artist, writer, musician and the Chair of the MFA Computer Art Department and the Director of Computer Education at the School of Visual Arts in New York. He has taught for nineteen years in the graduate, undergraduate, and continuing education programs in Computer Art.