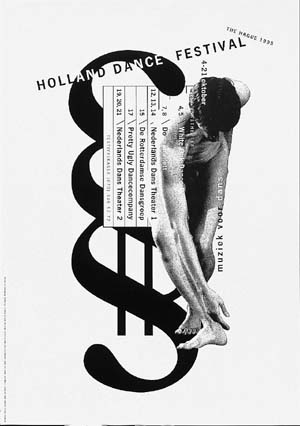 The exhibition A Roadshow of Dutch Graphic Design (1990-2003) presents a selection of the diversity and color produced by Dutch designers and design studios over the last decade. From these posters, books, catalogues, brochures, house styles, annual reports, magazines and a few websites, it becomes evident that graphic design is well integrated in all forms of expression in Dutch companies, cultural institutions and government agencies. This multiform stream of communication is the result of good design schools and professional possibilities for designers. At the same time, the collected work bears witness to the energy, the daring and the entrepreneurial spirit of their clients. The collection also characterizes the culture of the Netherlands. It is a culture that offers ample space for individuality, tolerance and progressive opinions.