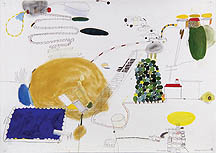 Guest curator Clodagh Keogh was born in Dublin, Ireland. She is a graduate of The National College of Art and Design, Dublin and has worked as a designer in Paris, where she has lived since 1990. She is currently completing graduate studies at Goldsmiths College, London.

These artists have shown nationally and internationally and have won awards such as fellowships from the Adolph and Esther Gottlieb Foundation, the Pollock Krasner Foundation, the National Endowment for the Arts, and the John Simon Guggenheim Foundation. Their exhibitions include prestigious New York galleries and the Biennial at the Whitney Museum of American Art, New York, among other renowned international exhibits.