Below: Tokyo Notes 3; 2005; from a portfolio of eleven lithographs, including title page and colophon, published by Kido Press, Tokyo 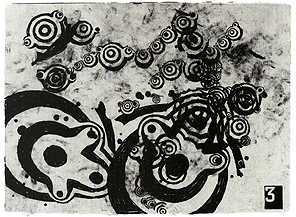 Terry Winters is known for his paintings, drawings and prints: layers of interlocking networks of accumulated lines, forming webs and grids that have intrigued, challenged and thrilled viewers for years. His first solo exhibit in New York was at the Sonnabend Gallery in 1982, and since then he has exhibited widely in the United States and abroad. Among the many publications of his work is a recent book in which his prints from the preceding decade were placed in the context of his work in other media. Titled Terry Winters/Paintings, Drawings, Prints/1994-2004, the book was organized and circulated by the Addison Gallery of American Art and co-published by Yale University. It includes essays by Richard Schiff, Rachel Teagle and Adam D. Weinberg, and its publication coincided with an exhibition of work by Winters at the Addison.

The Schick Art Gallery will showcase twelve Sketchbook Pages (graphite on paper) from 2002. These works, courtesy of the Matthew Marks Gallery in New York, which represents Winters, have never been displayed. Also in the exhibition is the series Tokyo Notes, a portfolio of eleven lithographs, including title page and colophon, published by Kido Press, Tokyo, 2005, courtesy of the Colby College Museum of Art, Waterville, Maine, where they are part of the permanent collection and were last exhibited. A catalogue with text by Francine Prose will accompany the Skidmore exhibition.