*This exhibition was organized by the artists; China Art Archives and Warehouse, Beijing; and Samek Art Gallery, Bucknell University

AND September 13th 3pm in the Gallery 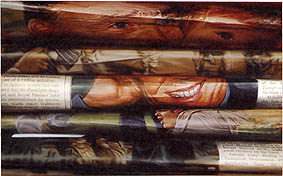 "Misleading Trails" is a result of our [Dan Mills' and Xiaoze Xie's] interaction and collaboration with a number of artists for a year and a half. Ai Weiwei, Hai Bo, and Hong Hao live in Beijing; Xiaoze Xie is from China but lives and works in the States now; Enrique Chagoya, Dan Mills, and Vernon Fisher are American artists. The artists have been actively involved in the curatorial process of "Misleading Trails," which can be regarded as an "organically produced" show. Even though there is not a single theme or artistic medium linking all the works in the exhibition, there are diverse and complex correlations between the featured works. The natural merging of conceptual and visual elements, the layering and complexity of meanings, the questioning and challenging of cultural and political significance and established value systems, deconstruction or synthesizing of art forms, the ambiguity of artistic styles, all of these are the traits that this group of extremely individualized artworks share. 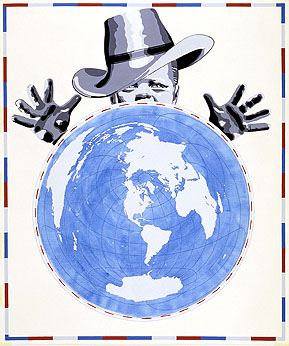