German painter Christoph Ruckhäberle will use the gallery as a working studio to complete a series of paintings while in residency; visitors may observe his process during limited gallery hours March 19th through April 16th: Mon. & Wed.

In my paintings, interior rooms set the stage for young men and women dressed in simple clothes. The dancing, standing, and sitting figures perform a variety of acts, often with blank stares or somber expressions. The characters, composed in classical poses, contrast with the relaxed rooms. These rooms act as theatrical backdrops where play is carried out with grim faces and animated gestures. Using neutral colors and figure-groups, I transform public locations into centers for relaxation. Stages with no directors, my paintings become places where boredom and possibility coexist.

In my most recent work, the viewer is able to look at the subjects from a new angle - one seems to be watching the scene from under tables, on the ceilings, floating in mid-air. These odd viewing positions extenuate the contorting bodies of the figures. Perspective is exaggerated and shrunken, legs are stretched, and everyone seems frozen in an unspecific scene. 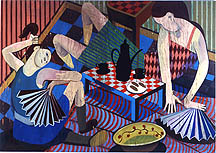