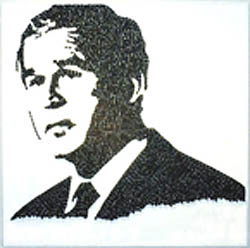 Images: Kristina Costa, Untitled, 2006, wood, toy soldiers (Best in Show)
Each toy soldier represents an American casualty in the War in Iraq, collectively forming a portrait of President Bush. This piece will be updated as the war continues. 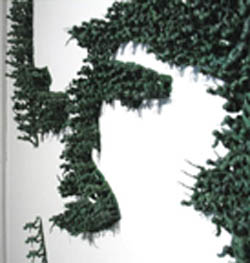 Ian Berry selected 38 works from 148 pieces submitted for consideration. All of the original paintings, drawings, sculpture, ceramics, prints, photographs, graphic design, metals and mixed media works on display were created by Skidmore students in 2006. A total of 77 students entered works; 30 are represented in the show. Berry also selected nine awards for outstanding work, which will be announced at the opening reception. These prizes are funded through donations made by friends of the gallery, campus organizations, and community businesses. A complete list of winners will be posted in the gallery along with a juror's statement.

A specialist in contemporary art, Berry served as Assistant Curator at the Williams College Museum of Art before coming to Skidmore in 2000. His many exhibitions for the Tang Museum include Living with Duchamp (2003), Twice Drawn (2006), and the "Opener" series of focused solo projects that has featured artists such as Shahzia Sikander, Nayland Blake, Lee Boroson, Jim Hodges, and Nina Katchadourian. Berry is also a frequent guest lecturer on museums and contemporary art practice and a regular essayist for exhibition catalogues. His recent publications include Kara Walker: Narratives of A Negress (Tang and MIT Press, 2003), Richard Pettibone: A Retrospective (Tang and Laguna, 2005), and America Starts Here: Kate Ericson and Mel Ziegler(Tang and MIT Press, 2006).