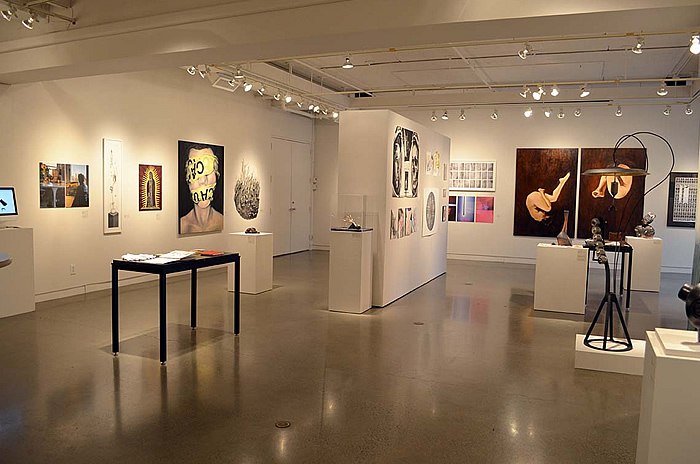 A highlight of the Skidmore academic year as well as a popular community event, we are pleased to present the 2016 Juried Skidmore Student Exhibition, a celebration of the creativity, imagination, and skill of Skidmore College students.

This year, 273 works in all media were submitted for jurying. Juror Douglas Dreishpoon (see bio excerpt below) selected 81 works in all materials, including painting, drawing, ceramics, sculpture, jewelry, fibers, printmaking, graphic design, photography, and animation, for inclusion in the exhibition. From those, he selected nine works to receive awards and ten to receive honorable mentions. (See list below.) Awards and gift certificates are funded through donations by friends of the gallery, campus organizations, and generous community benefactors.

Excerpt from Juror's Essay
Content counts for a lot in my curatorial consciousness. So do humor and quirky images that reveal the personality of their maker. The poetry of small things colors my perception of the world. We’re encouraged to think big, and that's all right, so long as we keep our eyes on the seemingly insignificant details that can surprise and enrich us…. Read full essay here

Abridged juror bio: Douglas Dreishpoon is Chief Curator Emeritus at the Albright-Knox Museum in Buffalo, N.Y., and was curator and director there from 1998 to 2014. He has worked in museums for more than twenty years, including the Weatherspoon Art Museum in North Carolina and the Tampa Museum of Art in Florida. His essays and reviews have been published in numerous catalogs and magazines, including Art in America and Art Journal. Dreishpoon holds a PhD from City University of New York and is a 1976 graduate of Skidmore College with a major in art history.