What makes Skidmore so funny? A Q&A with ComFest producers

Artwork created and provided by the National College Comedy Festival

Skidmore College is a small liberal arts school, but it is a mighty hub for comedy.

Take four Skidmore improv and sketch groups, add 10 visiting college comedy groups, a dose of professional talent, a burst of aspiring comedians and put them all on stage for the 31st annual National College Comedy Festival and you may begin to wonder: What makes Skidmore so funny?

We talked to the student producers of this year’s “ComFest” — Sarah Marlin ’20, Parisa Kabiri ’20 and Max Grossman ’20 — to learn a little more about what makes laughter, and this event, an integral part of the Skidmore student experience. 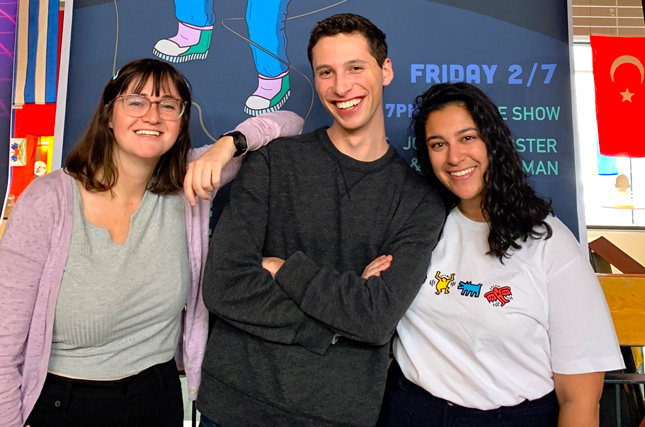 Q: Could you each tell us where you’re from and a little about what you’re studying and involved with at Skidmore?

Sarah Marlin: I’m from Saratoga Springs, New York, and I’m studying history and theater. I probably spend most of my time here in the theater, North Woods, or with Skidomedy, a sketch group or Awkward Kids Talking (AKT), an improv group. I’ve also been a DJ at WSPN 91.1 since my first semester.

Max Grossman: I hail from sunny Los Angeles, California, and I’m an American studies major with a minor in media and film studies. I’m also involved with JKB Theater, Skidmore Outing Club and have been a member of Skidomedy since my sophomore year. So much to do, not enough time!

Parisa Kabiri: I'm from San Mateo, California, and I’m majoring in psychology with a minor in education studies. I'm a Thoroughbred Ambassador for our Admissions office and a Peer Health Educator, among other things. I’m also a proud long-time improv artist with AKT.

Q: Was comedy part of your decision to Skidmore? Or did you discover the history and opportunities once you arrived?

Marlin: I had no idea! During my Accepted Candidates Day, my tour guide said, “I’m president of the sketch group Skidomedy” and I remember thinking “that sounds cool, maybe I’ll be a part of that.”

Grossman: I discovered it all my freshman year and would regularly drag my friends to see all the student groups perform. I never thought I could be in one myself until Sarah convinced me to audition for Skidomedy. I had never auditioned for anything before and I was nervous beyond belief.

Kabiri: I've loved improv comedy for forever. I knew that there were some improv groups on campus before I came, and I also knew a bit about ComFest. What I didn’t know until I got here was how big the comedy scene is and how connected the groups are.

Q: Tell us about ComFest. What is it, when it is and how does it work?

Kabiri: ComFest is a major annual entertainment event held at Skidmore. This will be our 31st year. It features four professional acts and up to 12 visiting college comedy groups as well as Skidmore’s four groups for two nights of fun and laughter!

Each night (Friday and Saturday) has a 7 p.m. show that showcases half of the college groups. They typically perform sketch or long-form improv. At 10 p.m., two professional comedians or comedy groups perform.

On Saturday morning, we have development and networking opportunities. The best part is we integrate the professional acts with the student groups, giving everyone a chance to connect and learn from each other.

Grossman: The biggest thing to know about ComFest is that it’s an instant community. The visiting students all stay with us on campus, so it’s a collective experience. Also, it’s the second weekend in February every year. Save the date.

Marlin: I’ll add that ComFest was started by David Miner ’91, an executive producer for NBC’s “Parks and Rec” and “30 Rock.” And to this day, it’s really the combination of college groups performing their sets with some the biggest names in standup and improv that make the festival so exciting.

One of the professional groups this year, The Late 90s, I fell in love with while I was studying at the Columbia College of Chicago Comedy Studies program at the Second City. It’ll be so surreal to have them here.

Q: Why did you get involved in ComFest?

Grossman: Producing ComFest seemed like a once-in-a-lifetime opportunity. Just look at the name of the festival – it’s national! Post-grad, I want to be an entertainment producer, so this has been such an amazing learning experience.

Marlin: When I was a freshman in Skidomedy and Comfest 2017 came around, I remember looking up to the producers and admiring how committed they were. I guess I just kind of told myself that I had to be here and would do what it takes to make it happen.

Kabiri: I was excited to be a part of a project rooted in tradition. I was feeling ambitious to work on something bigger than anything I’d ever done before, and I know now that I’ve grown more as a person and professional that I ever expected.

Q: When do you start planning and what does it take to pull it all together?

Kabiri: Over the summer, we built a list of professional groups we’re excited about, their agents’ names and rates. Then, in the fall we oversaw the auditions of more than 40 college groups from around the country and selected 10 for our lineup Spring semester is all about working with the production team, organizing housing, scheduling, sales, contracts and accounting … Taking on ComFest is a beast, but we pour our hearts into it to put on the best show that we can.

Marlin: It’s a big job. And a lot that came our way we just had to learn on the fly and roll with, whether that’s budgeting and finance or negotiating with agents.

Grossman: Parisa says it best calling ComFest a “beast.” It’s a gargantuan undertaking. And it’s astonishing to pull back the curtain and see there are just three of us.

Q: How would you described the relationship with the other schools?

Kabiri: Comradery. Without a doubt. As fun as it would be to draw swords and fight to the death, it really is about the mutual love for this type of performance. We are all on a level playing field ... a bunch of college kids just trying to have a laugh!

Marlin: It’s a celebration! It has never felt like a competition but more of a “woah look what they’re doing with sketch at Emerson or improv at Loyola.” It’s exciting to meet people who also are just as dedicated but bring so many different styles, points of view and ways of creating comedy.

Q: What do you think makes Skidmore funny?

Grossman: In Skidomedy, we often write sketches about Skidmore life because the humor comes so naturally. Not making fun of it, but rather showcasing the everyday shared silly experiences. Skidmore also has an absurd number of squirrels, which some might say is funny.

Marlin: I think Skidmore’s size contributes to its funny. Being around many of the same people for all four years in classes and clubs leads to a lot of funny shared experiences.

Kabiri: Probably the relationships between people who just want to have a laugh. In a life filled to the brim with schedules and routines, there are a lot of people here who value lighthearted positivity and sharing it with each other.

And no matter how ambitious we get … like going international this year … we come back to things that are uniquely Skidmore ... intimate settings, a community feel and a welcoming audience.

Q: You’re all seniors. Are we going to be hearing great comedic things from you in the future?

Kabiri: I think this may be the end of comedy for me. The extent of my comedy is in improv. I can’t be funny when I think about it. It's too much pressure! I’m hoping to pursue clinical psychology and maybe someday become a licensed therapist. Perhaps I’ll sprinkle a little humor into what can sometimes be a grim or negative setting.

Marlin: Ultimately, I love the community and the friendships that college comedy has gifted me. I hope to find the same post-grad. And whatever city I move to, I plan to get involved in the improv scene and continue writing.

Grossman: I hope to continue in the entertainment industry and would love comedy to influence my work. I was a production intern at DreamWorks Animation this past summer and realized that comedy helps no matter where you go.

Q: And one final question: what do comedians think Creative Thought Matters means?

Kabiri: We should remind ourselves to not get trapped in dull cycles. We should push ourselves to pursue what really excites, scares and inspires us. That's what truly matters and is what will keep us living our best lives.

Marlin: I think it’s the willingness to commit yourself to things you’re passionate about and adapting to different things thrown your way.