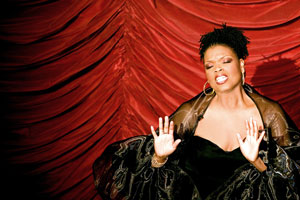 Angela Brown personifies the ideal American dramatic soprano: sheer vocal power; luxurious finesse; shimmering, high pianissimos; and a charming personality larger than life. Her highly successful Metropolitan Opera debut in 2004 sparked a media excitement with reviews from the New York Times: "At last an Aida," the Associated Press: "She combines a potent, dusky lower register with a striking ability to spin out soft high notes of shimmering beauty. There's no doubt her voice is powerful enough for Verdi," CBS Evening News: "The future of opera has arrived," and features on the front page of the New York Times and in Oprah, Essence and Ebony magazines, Classical Singer, Reader's Digest and Psychology Today.

Brown is a trailblazer on a mission to bring operatic and classical vocal performance to a diverse audience. Her witty and inspired recital program titled "Opera ... from a Sistah's Point of View" dispels the myths of opera through lively commentary on opera plots and characters, show-stopping arias, poignant art songs and moving spirituals. A live performance of "Opera ... from a Sistah's Point of View" was recorded in October 2010 at the Musical Arts Center of Jacobs School of Music at Indiana University and is available for download via Amazon.com and Itunes.com and as a compact disc. "Opera ... from a Sistah's Point of View" has been presented throughout the country in concert halls, recital series, schools, community centers and churches and featured on CNN and in print media nationwide.

A noted interpreter of African-American spirituals, Brown produced Mosaic, a collaborative recording featuring spirituals with guitar and piano, in October 2004; it is available from Albany Records. A live Christmas concert with the Indianapolis Chamber Orchestra and Indianapolis Opera Chorus was recorded by WFYI-PBS in 2005 and airs on PBS television stations throughout the United States each Christmas season. She guest-starred on A Prairie Home Companion with Garrison Keillor in June 2009. In July 2010, Brown was presented in Shanghai at the World Expo 2010 as a guest of USA Pavilion and the United States Consulate. She was the only opera singer invited to perform for the USA Pavilion. She also opened the One Nation Working Together Rally in Washington, D.C., by singing the national anthem on the steps of the Lincoln Memorial and was the guest soloist with Marvin Hamlisch for the Indianapolis Prize gala.

In 2008–09, Brown sang Aida for the Cape Town Opera in South Africa and Aida for the Latvian National Symphony in Riga and Tallinn, Estonia. She performed a special program for Cincinnati Opera's annual gala in November and celebrated Christmas with the Birmingham Symphony Orchestra in Alabama and the Southwest Michigan Symphony. In January 2009 she sang Aida at Deutsche Oper Berlin, and in February she followed with performances of Leonora in Il Trovatore for The Atlanta Opera. Spring held performances at Carnegie Hall for Jessye Norman's Honor! Festival and Un Ballo in Maschera for National Opera of Paris. Last summer she sang Elisabetta in Don Carlo for Cincinnati Opera and performed with the Cleveland and Philadelphia orchestras.

Brown returned to the Metropolitan Opera to sing the 2007 season premiere and fall performances of Aida and the 2008 spring performances of Amelia in Un Ballo in Maschera. Other engagements last season included her first appearance in the role of Leonora in a concert version of La Forza del Destino with James Conlon for the Cincinnati May Festival. She was chosen by the Library of Congress as the featured soloist for the National Celebration of the Bicentennial of Abraham Lincoln in February and by the NAACP for their annual conference in 2008.

In 2005 Brown created the role of Cilla for the world premiere of Margaret Garner, a new opera by Richard Danielpour and Toni Morrison. She performed this role for all three commissioning companies: Michigan Opera Theatre, Cincinnati Opera and Opera Company of Philadelphia. The 2003–04 season encompassed four highly successful and critically acclaimed role debuts as Ariadne, Elisabetta (Don Carlo) and Leonora (Il Trovatore) for the Opera Company of Philadelphia and Cassandra in Taneyev's Agamemnon for her Carnegie Hall debut.

A 1997 National Metropolitan Opera Council Auditions winner, Brown received her bachelor of music degree in voice from Oakwood College in Huntsville, Alabama, where she studied with Ginger Beazley. She attended the Indiana University School of Music as a student in the studio of Virginia Zeani. Brown received the Indiana University African American Arts Institute's inaugural Herman C. Hudson Alumni Award in 2006, given annually to recognize outstanding contributions made in the arts by former members of the Institute. Brown is featured in Nineteen Stars of Indiana, a book by Michael S. Maurer about 19 living Hoosier women with successful and inspirational life stories, released by Indiana University Press in December 2008. In fall 2009, she received the Governor's Arts Award from the governor of Indiana, a Spirit of the Prairie Award from Conner Prairie in Indiana, and she was inducted into the Indianapolis Public Schools Hall of Fame.