Storytelling doesn't stop with the last week of classes, but carries on through connections with voices of communities in the surrounding region and beyond. This past summer, MDOCS students added to their skills heading into the field in the Storytellers' Institute, internships, taking summer courses and exploring overseas summer programs. Three MDOCS students decided to venture away from Saratoga Springs to expand their storytelling, finding different perspectives in nearby North Troy, New York, on the Pacific coast in Oregon and across the Atlantic Ocean in London, UK.

For the first time, MDOCS was able not just to encourage this continued development, but also to offer financial support. Thanks to a generous grant from Skidmore parents who wanted to encourage those still seeking a path to test their interests while expanding and implementing their documentary skills, two students, Julia Cavicchi '18, and Sindiso Mafico '19, found their initiative to identify singular opportunities with community-based, social documentary programs met with the ability to convert dreams into reality. 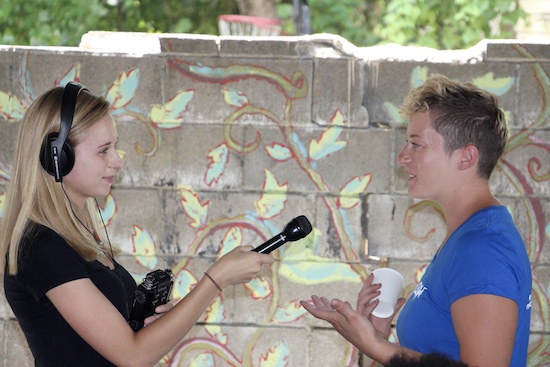 Julia Cavicchi took her skills from documentary audio courses to North Troy, New York, at the Sanctuary for Independent Media. This volunteer-run community space offers public events, production and performance facilities, training in media production, a community garden and a meeting space dedicated to community media arts. While there, the environmental studies major recorded the unique voices of "a constant flow of creative and passionate people from a wide variety of backgrounds, each eager to share their stories and experiences." Read and listen to learn more about her experience in her blog post here. 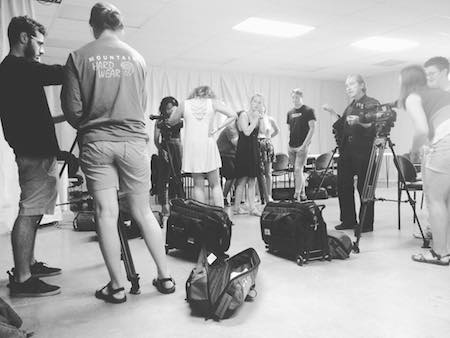 Sindiso Mafico (3rd from the lft) on set

Sindiso Mafico, headed to Portland, Oregon, to the Media Institute for Social Change, where she created a short documentary video that addressed racism in America through the lens of an African-American retired policeman. "Racism undoubtedly exists in this country and it can be as innocent as the Academy Awards nominating only white people for excellence in the film industry, to the extremes of a policeman shooting an innocent black man at point blank range. I still believe in the potential of our project to make a difference no matter how small that difference may be," states Mafico. You can read her blog post about the project and watch her short film here. 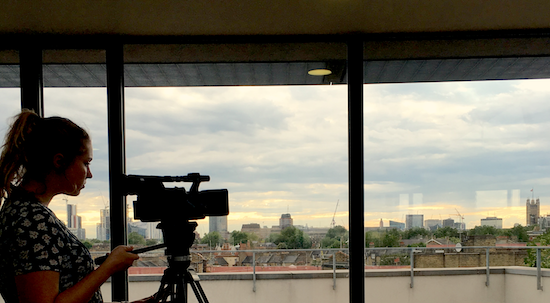 Sam Grant filming during her summer
filmmaking program in London.

For an international perspective, Sam Grant, '18 (theater/media and film studies) crossed the pond to London, where she attended the University of Arts London. While there she was put through an intensive monthlong program at the London College of Communication, where she worked with students from around the world on film projects, both documentary and dramatic. As she states in her blog post, she learned everything from practical production skills such as setting up your camera and a boom to working with actors on set and other "on-set egos," "Each lesson proved to be as valuable as the next," Sam shares, and their experience showed them the ropes from pre-production to the very end at color correction. Learn more about her experiences on set and in a new city (and country!) in her blog post here.