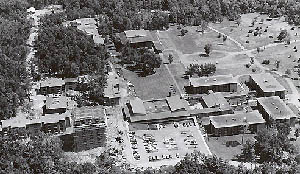 Joseph Cornwall Palamountain Jr. became Skidmore's fourth president in 1965. President Palamountain, who earned a Ph.D. in political economy and government from Harvard University, served as provost of Wesleyan University before coming to Skidmore.

By the summer of 1968, the new campus was functional, with construction completed on Starbuck Center, Kimball, McClellan, Penfield, and Wilmarth halls, a dining hall, a heating plant, athletic fields and a field house, the Filene Music Building, the Lucy Scribner Library, the Dana Science Center and Bolton Hall. Work was progressing on additional buildings, such as the Jonsson Tower, pictured toward the bottom left in the photograph above.

Many Skidmore students joined a national student strike against the Vietnam War in May of 1970. According to a special strike issue of the Skidmore News, students demanded that (1) the U.S. government end the oppression of political dissidents and offer a fair trial to Bobby Seale, (2) the U.S. government cease its escalation of the Vietnam war into Cambodia and Laos, (3) universities end their complicity with the U.S. war machine by terminating such programs as defense research.

In February of 1971, the Board of Trustees unanimously approved coeducation for Skidmore. President Palamountain emphasized the fact that men would be admitted solely on the merit of their applications and not in fulfillment of any quotas.

President Palamountain retired in 1986. His presidency had seen the switch to coeducation, the adoption of the University Without Walls program, the chartering of a Phi Beta Kappa chapter, the growth of enrollment from 1,400 to 2,100 students and the beginning of the Celebration Campaign to raise 25 million dollars for the college.