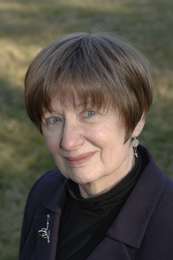 Susan Kress’s long and impactful career at Skidmore began in 1975, when she joined the College’s faculty. A distinguished teacher, literary scholar and feminist, she was the first Skidmore professor appointed to the Class of 1948 Chair for Excellence in Teaching.

She served as Skidmore’s vice president for academic affairs from 2006 to 2012.

From Nov. 1, 2010, to May 1, 2011, Kress was called upon to serve as acting president during the sabbatical of President Philip A. Glotzbach. During those six months, Kress kept the College’s key objectives and programs moving forward. In describing her role then, she said, "It is very important to keep our momentum going. When the president comes back from his leave, I want to report real progress on the initiatives of the Strategic Plan."

Throughout her time at Skidmore, she devoted her time and expertise to many College committees and new initiatives. Glotzbach described her as an exemplary “teacher-scholar-citizen.”

Kress retired from Skidmore in spring 2012.

Today, the Kress Family Fund for Creative Pedagogy, established by the colleagues, students, friends and family of Susan Kress, now supports an annual award of $2,000 to a faculty member who proposes a new teaching venture.