We're always building on traditions and trying something new. And while you truly have to see, hear and feel these things to understand why you’ll love them, here's a taste to get you excited. 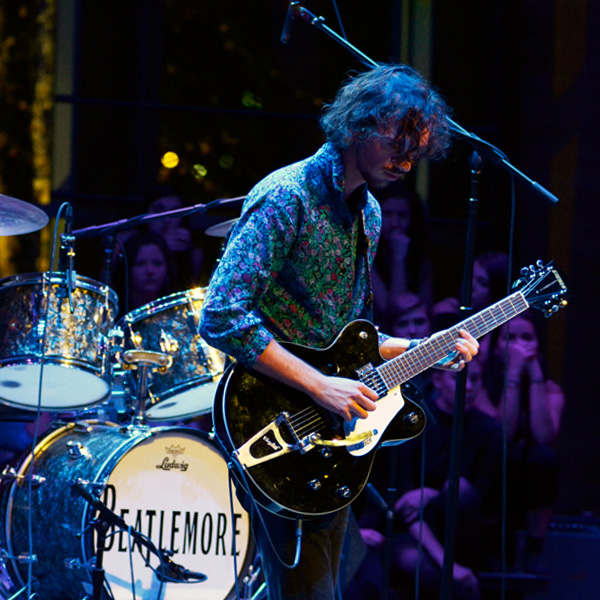 Initially inspired by students in a Beatles seminar who just wanted to jam with their friends, Skidmania is now a charity concert so popular that it fills the biggest concert hall on campus for three sold-out shows. Each year, student musicians perform music from 50 years ago meaning, in 2022, we'll be jamming to the 1972 sounds of Led Zeppelin, James Brown, Carole King, Elton John, and more. 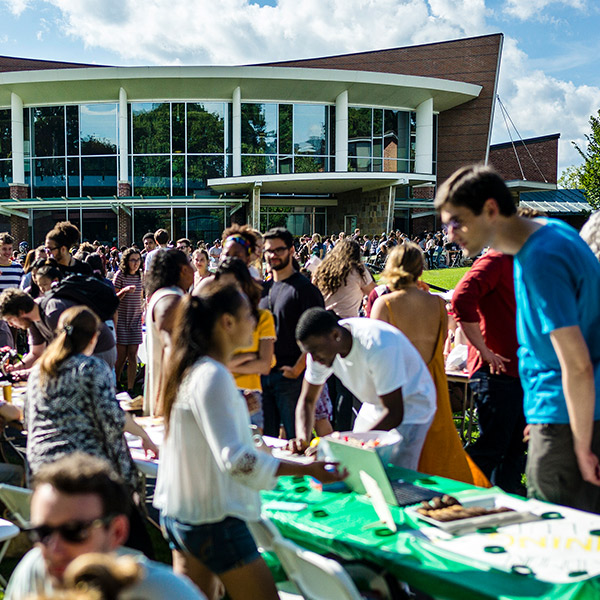 Held twice a year on the first Friday of both the Fall and Spring Semesters, Club Fair is one of our biggest, and most loved, campus traditions. Part festival and part registration drive, this bi-annual event is full-on fun as 100+ clubs audition for your participation.

Video: See it in action 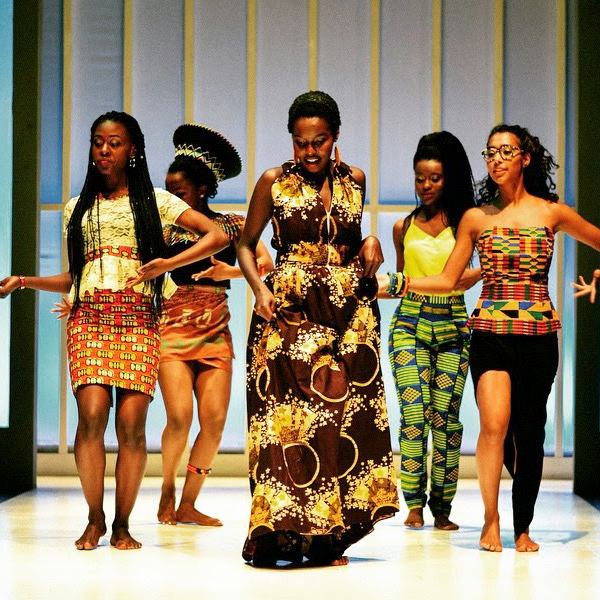 Ujima, Skidmore's Caribbean and African American club, has hosted more than 25 fashion extravaganzas. Student models take to the runway to demonstrate, through beauty and strength, how people of color excel in spite of life's obstacles. Ujima is a Swahili word that means building community by treating others' problems as your own and solving them together. 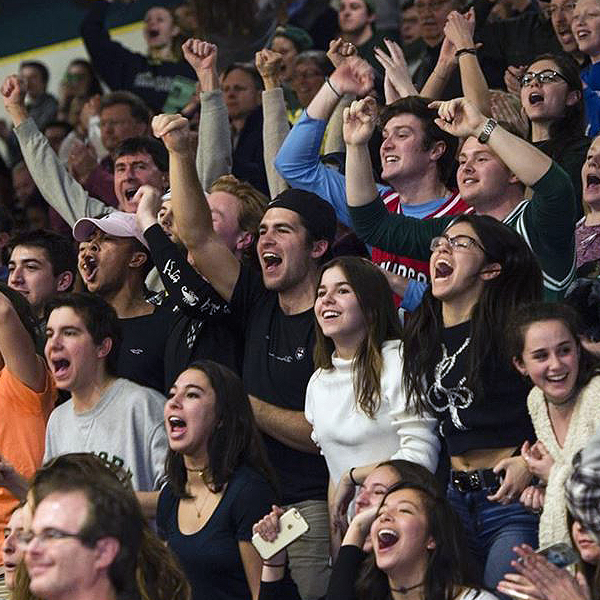 Picture about 1,200 raucous spectators showing off their school spirit as they pack the Williamson Sports Center for back-to-back men's and women's basketball games. What better way to tip off a season of T-breds basketball? Show up early for a chance to win huge prizes like TVs and catch some of Skidmore's top performers at center court. 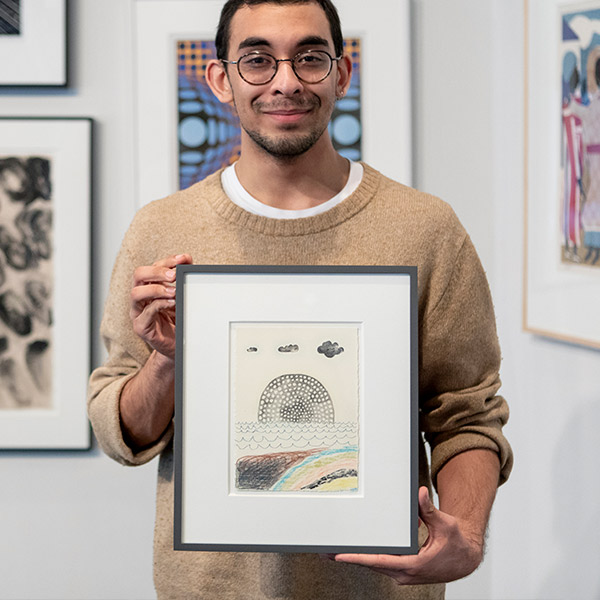 Have you ever wanted to live with art you saw in a museum? Here, you can hang a Matisse, Dali, or Picasso above your bed. That is, if you get in line in time. Each year, students camp out overnight to be the first to pick from a selection of 75 works in the Tang Teaching Museum available to borrow and hang in their dorm or apartment. 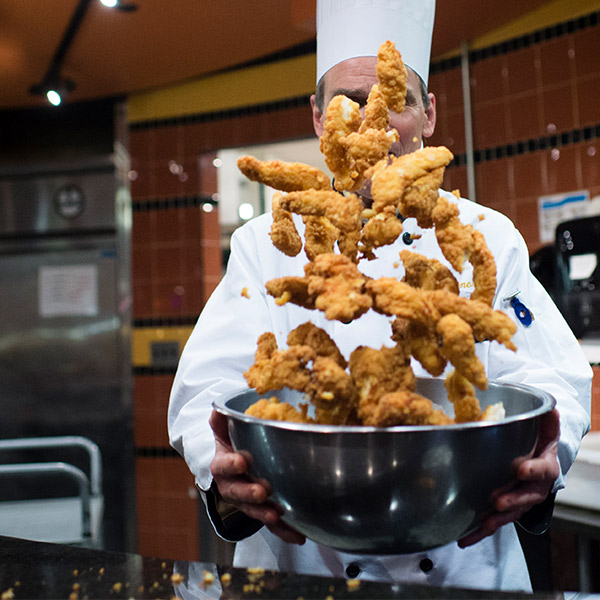 Every Friday in the Murray-Aikins Dining Hall (ranked one of the best in the nation) students, professors, and staff line up to dine together on chicken fingers and fries (or plant-based nuggets). It's a simply yet savory tradition that brings people together and spans the Skidmore generations. 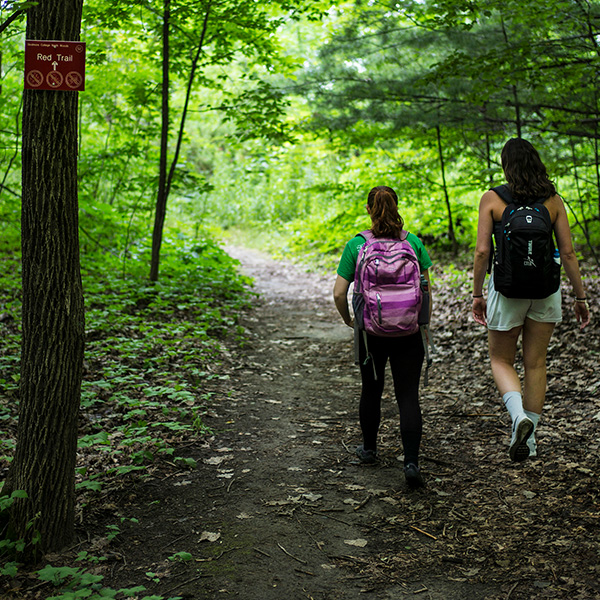 Hiking in the North Woods

Hiking in the North Woods

Skidmore's 250-acre North Woods is a forest that's home to more than 660 species of plants including rare ferns, the red-spotted newt and painted turtle, and a wide variety of birds. Monitored by student stewards, the woodlands feature a trail system perfect for hiking, cross-country skiing and occasionally getting away from it all. 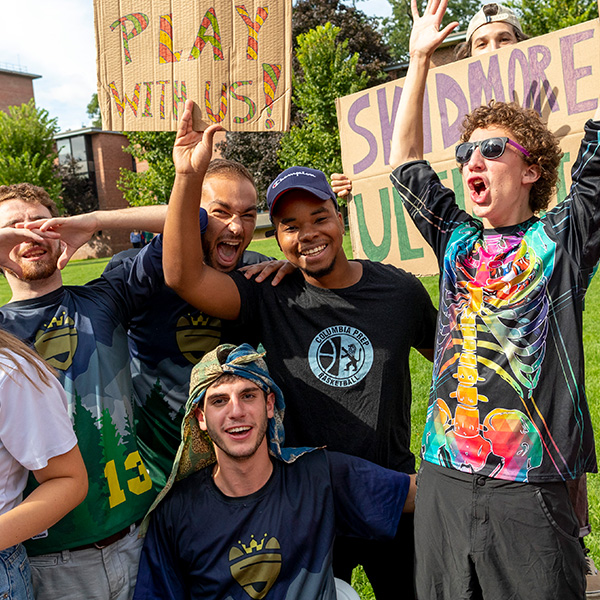 Being yourself - not a Greek letter

Being yourself - not a Greek letter

Strong friendships and a great sense of community keep things interesting on campus. According to The Princeton Review's Best Value Private Schools, students are happy that we don't have fraternities or sororities. It means there's "no pressure to join or conform to anything." It also means our 100+ student clubs are organizations are only that much more vibrant. 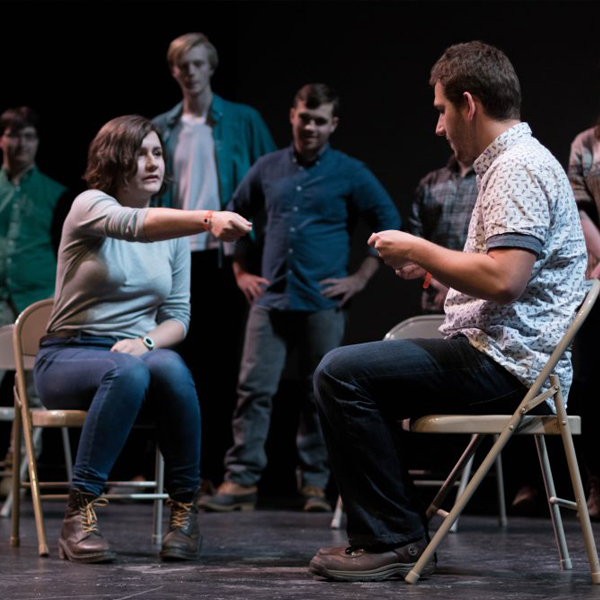 It's no laughing matter. Actually, laugh all you want. Because when it comes to college comedy, Skidmore might lead the pack. The National College Comedy Festival was started at Skidmore by David Miner '91 ("30 Rock," "Parks and Recreation"). It's a big draw, with professional comedians and college troupes like our own Skidomedy, Sketchies, Awkward Kids Talking and Ad Liberal Artists converging on campus. 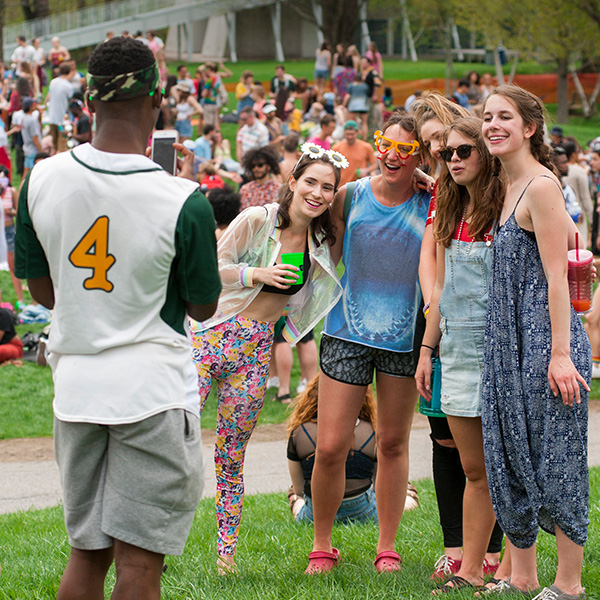 Get ready to celebrate the most whimsical day of the entire year. Fun Day is Skidmore's mini version of Coachella with an endless lineup of our best bands, groups and performers. Grab a blanket and snag a spot on Case Green, plan a creative outfit and get ready for an all-out-music-fest-meets-last-hoorah-of-the-semester blast. 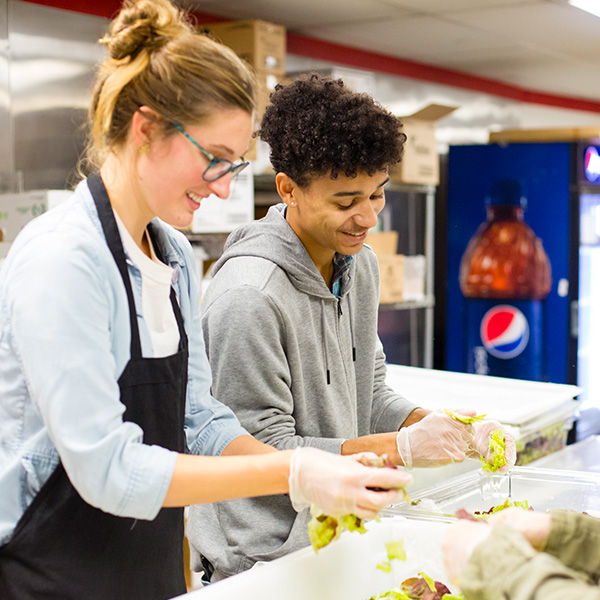 As an unofficial kickoff to the Thanksgiving season, we have our own celebration of healthy, local, sustainable food enjoyed together as a family. Each year, the bounty from the Skidmore Community Garden is harvested, cooked up and combined with other locally sourced ingredients, to create a masterful meal only possible with the love it takes to grow your own. 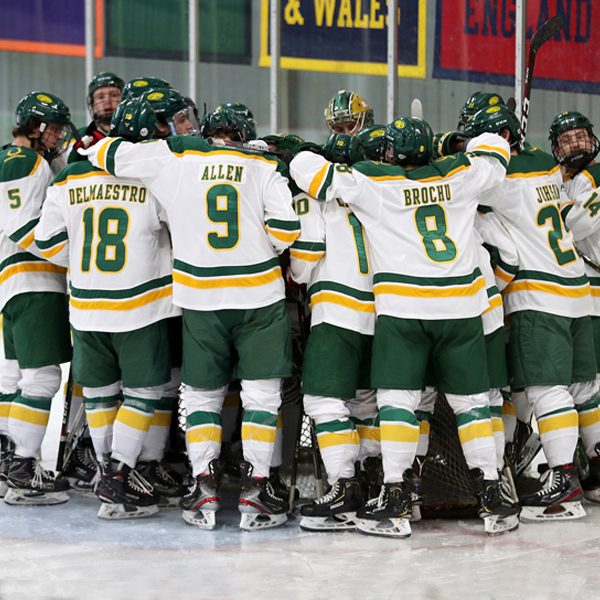 The Pack the Rink home game celebration kicks off opening weekend of Skidmore's hockey season and is a perfect bookend to the fall season. At the event, hundreds of fans win free T-shirts and participate in contests for dozens of other prizes. Fans are also encouraged to bring canned goods for the Skidmore Cares  food drive. As an entirely free event with Skidmore transportation, there is no excuse not to join in and root for the T-breds!

Daily life at Skidmore is everything you’d expect and more. But, don’t just take our word for it. Read and listen to stories by current students for prospective students that illustrate what it’s really like to be a Thoroughbred.