April is the coolest month.

Despite today's snow suggesting we're headed back into winter, there's plenty of springing around campus.

The MDOCS Summer 2016 Storytellers' Institute fellows—four institute fellows, two Skidmore faculty scholars and eight Skidmore student scholars—are looking forward to June on campus. Planning for Fact and Fiction: Walking the Line is well under way, with amazing public programming set for our keynote Point of Departure (June 2) and Festosium (June 9–12). Summer classes, including DS classes on essay film and audio doc, are open to students from Skidmore and beyond.

Registration starts April 5 for fall 2016 classes. MDOCS offerings include our first crew-based film production course and a virtual reality workshop, as well as media projects for the Salmagundi journal with editor Marc Woodworth and a public service announcement video-production course to support campus and community programs.

Plus, several programs hosting amazing doc events on campus in the next week, from media and film studies keynote speaker re-examining lynching photos to visiting film documentarians Jeff Malmberg (Marwencol) and alum Joanna Schwartz '96 (They Will Have to Kill Us First: Malian Music in Exile) to media figures Kate Fagan and Kristin Russo on Monday to talk about coming out in organized sports.

Beyond campus, there's also a lot of doc to be thrilled about in the Capital District. The Saratoga Film Forum launches a revised monthly programming structure, offering documentary films on Thursdays, foreign films on Fridays and indie features on Saturdays. YouthFX and the Carey Institute for Global Good launch NextDoc, a four-day residency for emerging college-aged visual documentary storytellers (late application deadline is April 4), and Saint Rose's film school is looking forward to this year's 15 Minutes Max film festival. Start thinking about your submissions!

And down in the Big Apple. Skidmore heads down to NYC for two amazing events. On April 14–15, Eric Morser's "Public History" class joins partners from 19 other programs in the New School's Humanities Action Lab (HAL) for a conference inaugurating the States of Incarceration exhibit. The History Department, MDOCS and Project Vis sponsored the team that studied Mount MacGregor, a recently closed facility in Wilton, New York. They interviewed former inmates and others who participated in a rehabilitation program, visited the site and designed one section of the exhibit.

Plus, Assistant Professor of English Cecilia Aldarondo's debut documentary film, Memories of a Penitent Heart, premieres at Tribeca Film Festival next week. MDOCS, media and film studies and English students and faculty are headed to the city on April 23 to see the film and meet with Tribeca filmmakers. Festival, here we come!

Cuba Travel Seminar: How Was Cuba?

As to what we were up to in March? The supposedly cruelest month not only brought 70-degree sunny days but also student interviews of retirees for the Skidmore-Saratoga Memory Project, a multimedia exhibition by students from the January 2016 travel seminar to Cuba in Case Gallery, a visit by YouthFX directors to campus, and visits by documentarian filmmakers and activists Dave DeSario (A Day's Work) and Khader Abu Seif (Oriented) engaging topics from workers' rights in the United States to activism for gay rights and Palestinian-Israeli relations. Plus local documentary filmmaker Charlie Samuels organized a focus group screening of his work-in-progress for students, staff and area residents with an assist from Sam Mark '16 and Ron Taylor (DS, Media Services), helping us appreciate the many stages of a documentary project. 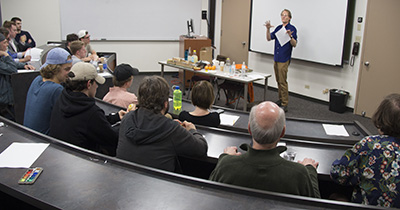 Finally, I had the opportunity to serve as a jury member on the Saratoga Film Forum's first short film competition, Winter Shorts.  Not only did I meet some amazing area filmmakers aged 15–23, but was also thrilled to join fellow judges in awarding best picture to Dorothea Trufelman '16 for her reflection on turning 20, "Twentysomething."

What's next?  Among other things, MDOCS is brainstorming opitions to develop for a student-run documentary festival here at Skidmore (not just film, of course!) next year. Look for more on that in the coming weeks.