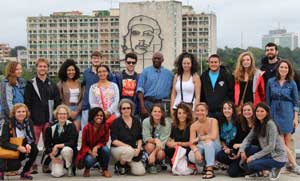 Students and faculty from Skidmore and St. Lawrence.

Today is the last day to view an exhibition by Skidmore and St. Lawrence students, who undertook a travel seminar in January to Cuba. How Was Cuba? Beyond Cars & Cigars…is on view through the end of today at Case Gallery.

President Obama is not the only one who visited Cuba in 2016, although his trip spurred more headlines than that taken by 18 students and two faculty from Skidmore and St. Lawrence University, who visited the island nation from Jan. 3 to 13. The exhibition features photographs, material objects, audio and video revealing impressions and connections made by the Skidmore group; a similar exhibition was hosted at Saint Lawrence earlier this month.

The exhibit compares current Cuba to the Cuba pictured in guidebooks from the early 20th century, considers the presence of Americans in Cuba, and offers snapshots of Cuban culture, sights and sounds. 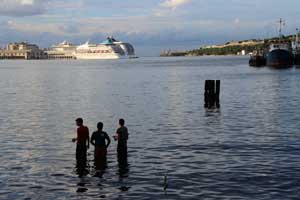 While there the students the capital city of Havana to explore historic centers and contemporary neighborhoods, got a dose of national and international culture visiting Cuban artist José Fuster and the home of American writer Ernest Hemingway, watched a baseball game, and visited churches and an organic farm. They traveled in the western part of the island to Playa Girón, site of the "Bay of Pigs" invasion as well as a sandy-beached tourist destination; and Pinar del Rio and Viñales, part of the country's tobacco-growing agricultural heartland. Guided tours and lectures featured such topics as the restoration of La Habana Vieja (Old Havana) by the Office of the City Historian and  medical tourism. The group thought about the role of travel and tourism in the island's history as well as its impact on contemporary Cuba.

Alicia Russo '17 wrote in the exhibition's opening statement, "Planning a trip to Cuba seems to be today’s most exciting travel fad. We spent an entire semester studying the history of travel throughout Latin America, starting from Christopher Columbus’s first excursion to the ‘New World’. This helped us understand the development of Latin America and also taught us to think critically of how that development occurred under the force of a western gaze and imperial mind.

“We were certainly eager to bring what we learned to a country that has captivated travelers for centuries. There was still so much more to learn. We didn’t know much about Cuba aside from its tumultuous relationship with the U.S., the 20th-century tourism, and stereotypes placed on it by the American public: cars, cigars, and 1950s decor. But once we arrived, it became clear that there was much more to experience than those overrated stereotypes.”

She added, “This exhibit shares a sense of our experiences as travelers and as Americans in a place we had never been before, and give our best attempt to answer the question we all were asked when we returned:  ¿how was Cuba?"

This project, availalble also as a website, is sponsored by the Office of Off-Campus Study and Exchanges, the Department of History, and MDOCS.

Photo essay: Excited to be back on campus
The entire Skidmore community is enjoying the start of a new academic year filled with dynamic courses, athletics competition, beloved traditions, and — most of all — the return of all students, staff, and faculty to campus.
END_OF_DOCUMENT_TOKEN_TO_BE_REPLACED
Sep 22 2021

Thoroughbreds triumphantly return to competition
Our fall athletes have been waiting a long time to be back on the field after the 2020 season was canceled. Without missing a beat, they've returned in full force and are racking up the wins.
END_OF_DOCUMENT_TOKEN_TO_BE_REPLACED
Sep 15 2021