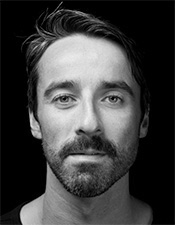 BRIAN LAWSON is a dance performer and educator who began dancing in Toronto, Canada.
In 2005, he spent a year at Codarts in Rotterdam and subsequently began his degree at SUNY
Purchase. While studying, he performed with Douglas Dunn and Dancers and as a
supplemental dancer for the Mark Morris Dance Group. He graduated summa cum laude from
Purchase in 2010 with a B.F.A. in dance performance and received the President's Award in
Modern Dance. He became a member of the Mark Morris Dance Group in 2011 and had the
great pleasure of touring the United States and the world performing Morris' dances. Brian left
MMDG to earn his M.F.A. from the University of Washington, where he graduated in 2020.
Since graduating he has been on faculty at Cornish College of the Arts.

Lawson enjoys teaching dance to diverse populations and has given masterclasses at Purchase
College, NYU Tisch, and the American Dance Festival among others. Recently he partook in
the Merce Cunningham Trust's event, Night of 100 Solos, and subsequently became a certified
teacher of the Cunningham technique. Currently he is a member of Pam Tanowitz Dance.