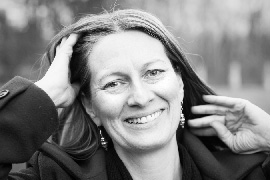 Lori joined the Skidmore faculty in 1998. She earned her MFA in lighting design from the University of Massachusetts at Amherst. She was a freelance lighting designer in NYC for ten years and had the pleasure of designing for such noted choreographers as Vicky Schick, Shelly Lee and Gus Solomons Jr. She served as Lighting Director of the Red Parrot Cabaret designing for a wide array of musical performers including Cab Calloway and Tito Puente. Lori collaborated with hundreds of choreographers and performance artists while serving as the resident lighting designer at the Gowanus Arts Exchange in Brooklyn. She worked with Director/Choreographer Elise Long for nearly 10 years designing for her company, Spoke the Hub Dancing, at numerous indoor and outdoor venues throughout NYC and Great Britain. While serving as the resident Lighting Designer for Dance Theatre Workshop (DTW), she designed the lighting for three Obie award winning shows: Janie Geiser’s Stories from Here, Dan Hurlin’s A Cool Million, and Paul Zaloom’s House of Horrors.

Locally, Lori has designed for the Saratoga City Ballet, Ellen Sinopoli Dance Company and HMT. In January 2013, she traveled with a band of artists to Death Valley, CA to put on a weekend of workshops and performances as a fundraiser for Marta Becket’s historic Amargosa Hotel and Opera House.

Lori is a member of USITT and at several annual conferences has served on panels under the lighting commission. She has also served on the board of the League of Women Voters of Saratoga County. In this capacity, she has led sessions and caucuses on a variety of citizen’s rights issues traveling to three National LWV conventions. Lori is one of the founders of the Saratoga Peace Alliance, a local, grassroots peace organization.