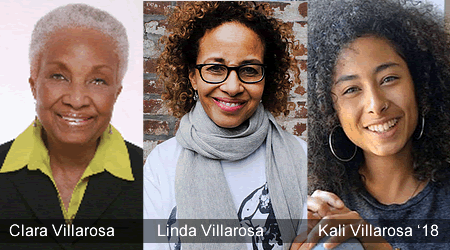 Three generations share experiences and insights on topics including health, business, education, and the intersections of gender, race, and LGBTQIA+ identity.

Clara Villarosa is an entrepreneur who “knows how to get down to the business.” She became nationally known as the founder of two influential bookstores and is now an author and NAACP image award nominee for her book Down to Business: The First 10 Steps to Entrepreneurship for Women, as well as a business coach and motivational speaker. Her second book, Words of African-American Heroes, a collection of inspirational quotes celebrating the wisdom of notable African Americans, was published in 2011. The recipient of numerous industry awards, Clara Villarosa is the founder of the African American Booksellers Association. She has also served on the boards of Colorado Small Business Development Center, New York Is Book Country, New Federal Theatre, Malcolm X, Betty Shabazz Education Center (for ten years), has organized workshops and chaired panel discussions for the Booksellers Expo annual conference, and is a past officer of the Business Owners Ministry of Abyssinian Baptist Church. She has been featured in print and electronic media, sharing insights and observations on business and entrepreneurship.

For several years, Linda Villarosa edited the health pages for the New York Times, as well as working on health coverage for the Science Times. She was also the executive editor of Essence Magazine, where she wrote and edited award-winning articles. As a contributing reporter for the New York Times, with articles appearing on the front page, she has also written for Glamour, Health, Latina, the New York Times Book Review, O magazine, Vibe, and Salon. She has won awards from the American Medical Writers’ Association, the Arthur Ashe Institute, Lincoln University, the New York Association of Black Journalists, the National Women’s Political Caucus, the National Lesbian and Gay Journalists Association, and the Callen-Lorde Community Health Center.

Kali Villarosa is a Skidmore College senior majoring in international affairs with minors in political science and intergroup relations (IGR). She is very involved in campus life as the president of student clubs the Speakers Bureau, Model EU and Benef-Action, as well as participating as an IGR research assistant, and in student activism. She recently received the Thomas R. Pickering foreign affairs fellowship and will be entering graduate school next year for her master’s in international affairs, followed by three years in the U.S. Foreign Service.