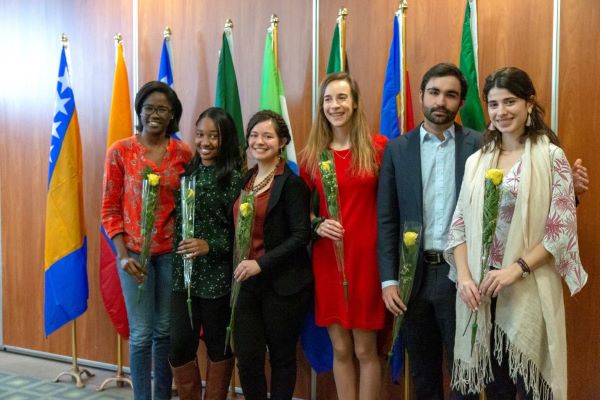 In 2004 the Davis United World College Scholars Program (DUWCSP) invited Skidmore College to join its growing list of American colleges and universities affiliated with and supported by the foundation of Shelby and Gayle Davis. Colby, College of the Atlantic, Middlebury, Princeton and Wellesley were the five pilot schools in the program that began in 2000. Skidmore was invited as the first expansion group of 47 colleges four years later. The DUWCSP encourages colleges to internationalize their study body by supporting need-based scholarship awarded to matriculated graduates of any one of (now) 12 United World Colleges (high schools) around the world. Suxin Cheah ’08, Joseph Kaifala ’08 and Kipsy Ndwandwe ’08, made up the inaugural class of Davis Scholars. In the 2012-2013 academic year, 40 Davis Scholars are now enrolled at Skidmore across the four classes. United World Colleges themselves have a common mission of making “education a force to unite people, nations and cultures for peace and a sustainable future.”

Skidmore Davis UWC Scholars share collective gatherings at different moments of the year and through the DUWCSP campus liaison, Chloe Jaleel, are notified of special program and fellowship opportunities. As a result of Skidmore’s participation in the DUWCSP, Skidmore students can apply for The Davis Projects for Peace grants.

Davis UWC Scholars have become part of the fabric of the Skidmore College community and continue to inspire fellow students to move the world in new directions.  As these students tell their stories and make their voices heard, they encourage all of us to look beyond regional and continental stereotypes.  Davis Scholars at Skidmore are engaged in the spirit of our community in ways that are both satisfying to them personally and complementary to our collective efforts.
Philip A. Glotzbach, 7th President

By Virtual Appointment Only

OPEN LAB HOURS- By Appointment Only