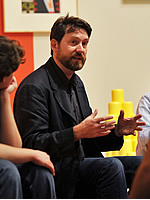 Berry served as Assistant Curator at the Williams College Museum of Art before coming to Skidmore in 2000. He is a leader in the field of college of university museums and is a regular speaker on interdisciplinary and inventive curatorial practice and teaching in museums. From 2006-2012 he served as Consulting Director of the Emerson Gallery at Hamilton College and in 2009-10 was the Roy Acuff Chair of Excellence in the Creative Arts at Austin Peay University.  He has chaired the Visual Arts Panel of the New York State Council on the Arts and serves on several advisory committees including Cranbrook Academy National Advisory Committee, Artist Advisory Board of the Fabric Workshop and Museum, and Saratoga Springs Art Commission among other regional and national arts organizations.