STUDENTS, PAST AND PRESENT 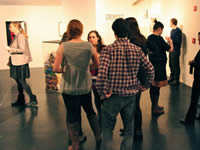 Crowded brought together an array of images to suggest the variety of ways that crowds permeate our lives, as well as the divergent effects crowds have on us.  The artworks in this exhibition depict crowded objects, figures, and picture planes to reveal the emotional and psychological consequences of crowding, and at times a combination of contrasting effects. Crowds can cause claustrophobia, loss of individual identity, loneliness, and a feeling of being overwhelmed; they can also prompt jubilation and a sense of community. The artworks in Crowded capture these effects by representing crowds of people that range from seemingly joyful to violent, as well as packed compositions and objects ranging from heaps of trash to indistinct forms. 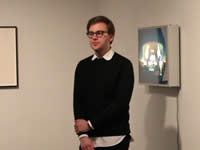 Dylan Lustrin, ’13, curated As the Night the Day

As the Night the Day interrogated our assumptions about the symbolic meaning of darkness and its relationship to light. In Genesis, the first book of the Old Testament, God creates light in a void of darkness — a light explicitly deemed “good” and placed in direct opposition to darkness. This dichotomy has become deeply embedded in western culture. Much as the effect of a dilated pupil, deprived of light for an extended period of time, the works in As the Night the Day transform darkness, making it a focal point. By rendering negative space as an integral compositional element, these works illuminate darkness and suggest its necessity for visual perception. The exhibition features artwork from the Tang Collection by Grace Hartigan, Edward Hopper, Barbara Morgan, and Krzysztof Wodiczko. Photo credited to: Patrick O’Rourke .