Bill Brown joined the Skidmore Biology Department in 1974 and retired in 1997. He has devoted his career to the study of timber rattlesnakes. An emeritus faculty development grant helped him continue his research during retirement.

How did your timber rattlesnake research develop during your time at Skidmore?

Around the spring of 1978, Denton Crocker, the department chair who hired me, showed me a copy of Adirondack Life magazine with an article on timber rattlesnakes. I was intrigued. Although I had begun a study of painted turtles in the Skidmore Marsh, I was really a snake biologist at heart. I called the author and he filled me in on the locality. I went up there along with my colleague, the late Don Pyle, and a great biology student, Chris Amato, who had taken all my courses and later served as a Department of Environmental Conservation commissioner with his law degree. Don and I started our study after we came back with the first timber rattlesnake I had ever seen, which we marked and later released. Tragically, Don was killed the next spring in a terrible fall from a ledge in what would become an important study area over the succeeding years. I persisted with the help of the Skidmore chaplain, Tom Davis, and two students who worked with me on the snakes for the rest of that year, but it wasn't the same without Don.

What has it been like to continue your research after retirement? Have you been able to maintain other institutional affiliations, or is it just as effective to work independently?

After I retired, I continued to teach part time at SUNY Albany and more recently at Skidmore, filling in for others on sabbatical. Since the early 1980s I have had the benefit of a field office at RPI's Darrin Fresh Water Institute in Bolton. My type of field work is a hermit's dream, as over the years I've done virtually all the steep climbing and snake hunting alone. However, in the past 10 years I've slowed down and now have a very capable young research associate, Matt Simon.

What have been the most important or interesting results of your research?

I collaborated with biologists at the U.S. Fish & Wildlife research labs at Patuxent, Maryland — one an expert in computer organization and one an internationally renowned capture-recapture modeling biologist who set me up in a collaboration with his post-doc. With this modeling expertise, and with my well-organized database, we three co-authored one of the first detailed statistical modeling studies of survival rates in timber rattlesnakes. Using the same database, I organized my own non-modeling study of the long-term reproductive dynamics of female rattlesnakes over a 36-year study period. This study came out a few years ago as an open-access paper through Skidmore's Scribner Library.

Is global warming affecting timber rattlesnakes as it has other reptiles and amphibians?

I think no doubt it is — very likely in the impact of moisture deficits more than thermal impacts at this point. The snakes can get out in the woods where it's cool and thus avoid the heat. But they have to drink to maintain their body hydration levels — a challenge in a year like this one with almost drought conditions. Overall, with warming conditions, the active season is already getting noticeably longer and this will affect their weight gains and growth rates — provided, of course, that their food resources (small mammals like mice and chipmunks) aren't declining. It's anecdotal more than data-driven at this point, but the impact of this terrible future will definitely need to be studied.

Does the Adirondack region provide a special habitat for timber rattlesnakes?

Most of the Adirondacks region isn't suitable for timber rattlesnakes, being historically too harsh and too cold in climate. About 8,000 to 10,000 years ago, when there was a Holocene warm spell for a thousand years or so, the snakes moved northward from their more southerly retreats of the previous million years. They evidently invaded northern areas of New York and New England mostly via the major river corridors (Connecticut, Hudson) and the lake areas (Lake George, Lake Champlain), largely restricted to available over-wintering sites.

Should people be wary of being bitten by a rattlesnake while hiking or boating in the Adirondacks? Have you been bitten, and if so, did it ever make you consider giving up your research?

No, hikers or boaters need not worry. The snakes are usually hard to find and remain hidden, and they usually retreat when confronted. They aren't aggressive. We've put in place an active recovery program that has saved most of the “nuisance” snakes that have appeared in a backyard, driveway, rock wall or campsite over the years. Yes, I've been on the receiving end of a fang or two. No, being bitten didn't dissuade me, because I figured that every time I encountered the business end of a snake it wasn't the snake's fault, it was mine.

What other activities have been occupying your retirement time?

My wife, Sheila Tuttle, and I have a 90-acre farm we purchased and retired to in 1997. I have to do quite a bit of mowing and tractor work just to keep the invading woods at bay. Along with our German shepherds, we love being in this environment — especially because we have a thriving rattlesnake den only half a mile up on the mountain. I knew about this den early on, and when the property came on the market we jumped at the chance. Our son (my stepson), who is a Saratoga Springs police officer, and his wife and two kids (our grandkids) occupy quite a bit of our time and attention, as we've introduced the kids to snakes and turtles and other aspects of the natural world. It's a lot of fun! 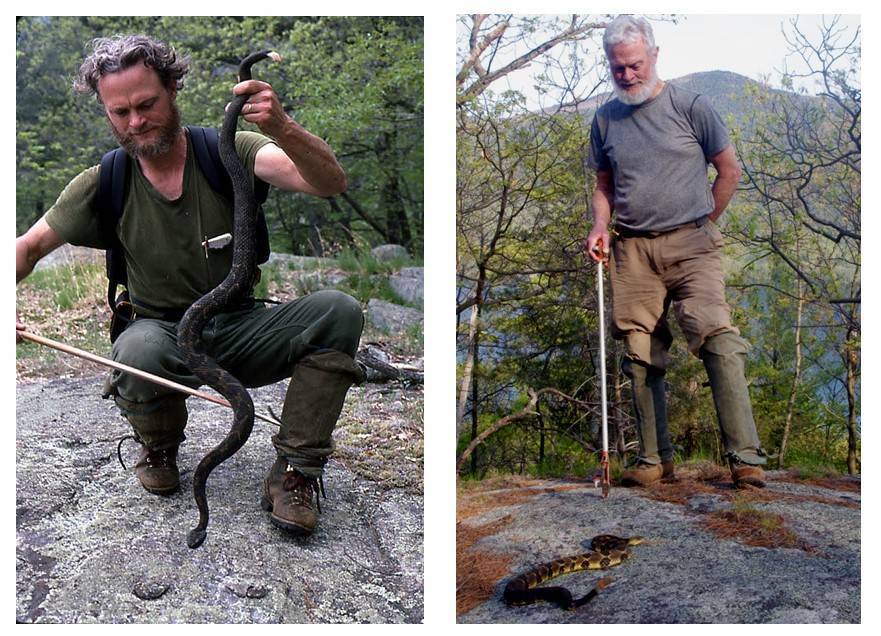 At left, Bill Brown in 1981 with an adult male timber rattlesnake. At right, Bill in 2016 with a female snake previously captured in 1981 and now estimated to be 51 years old, the record for longevity in the species.