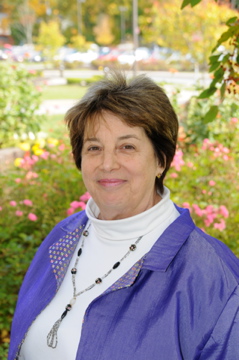 Lynne Gelber joined the faculty of the Department of Modern Languages and Literatures in 1966 and retired in 2002. She currently serves as executive director of Saratoga Chamber Players.

How long did you teach at Skidmore and when did you retire?

What is your role with Saratoga Chamber Players and how did you get involved?

As executive director, I am responsible for the general logistics, the website, PR, donor relations and grant writing for foundation and private support. I was asked to join the board back in 1987, about two years after the organization was started by Chuck Joseph, then chair of Skidmore's Music Department, and Lucy Manning, then a member of the Albany Symphony Orchestra. I left the board for a sabbatical in Paris but was asked to return in 1991. I later became board chair and, more recently, as the complexity of the organization grew, took on the current role.

What makes your involvement with Saratoga Chamber Players a satisfying occupation for your retirement?

I love puzzles and challenges and there are many in this role. I've used some HTML skills picked up as a faculty member before retirement but, in particular, I enjoy relating to the concertgoers and to our donors. Most recently, I started a new program with one of our cellists who has experience with a music program in NYC and with our artistic director, Jill Levy, who is also concertmaster of the Albany Symphony Orchestra. I wanted to address the concern many classical music groups have about their aging audiences and the need to attract young people to the joys of this kind of music. We called our program "Classroom to Concert" and use tunes the children invent to go with a story. This year, we were at Lake Avenue School and the children developed music for "The Little Prince." Our cellist recorded the children's suggested tunes and turned them into scores to sing and for the fifth-grade orchestra to play with three of our professional musicians. The final all-school concert was such a success that we were asked to repeat the program at SPAC this summer as part of "Poetry in the Pines." We've been invited to repeat this at Division Street School this year. Other programs we instituted were concerts at Caffè Lena for families and at the Wesley retirement center for those unable to leave their residence.

For the past 10 years I've been on the national board of Grants To You and have been offering workshops in grant research, writing and effective budget-making for local volunteers of not-for-profit organizations. Skidmore's Development Office and, more recently, the Office of Special Programs have hosted us on campus to hold these two-day workshops.

How do you enjoy your retirement time apart from volunteer work?

I love reading, attending concerts and taking walks with my dog.