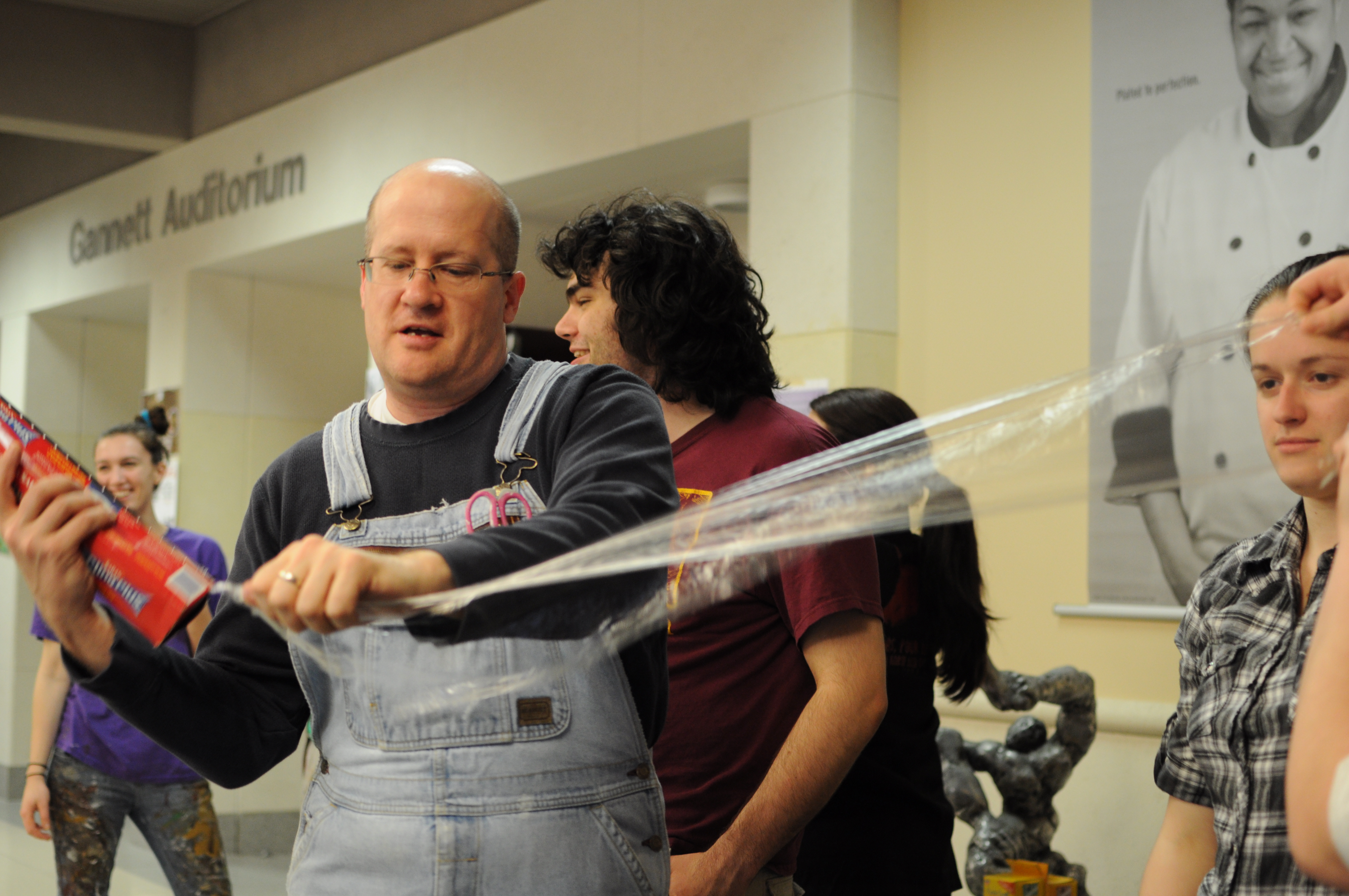 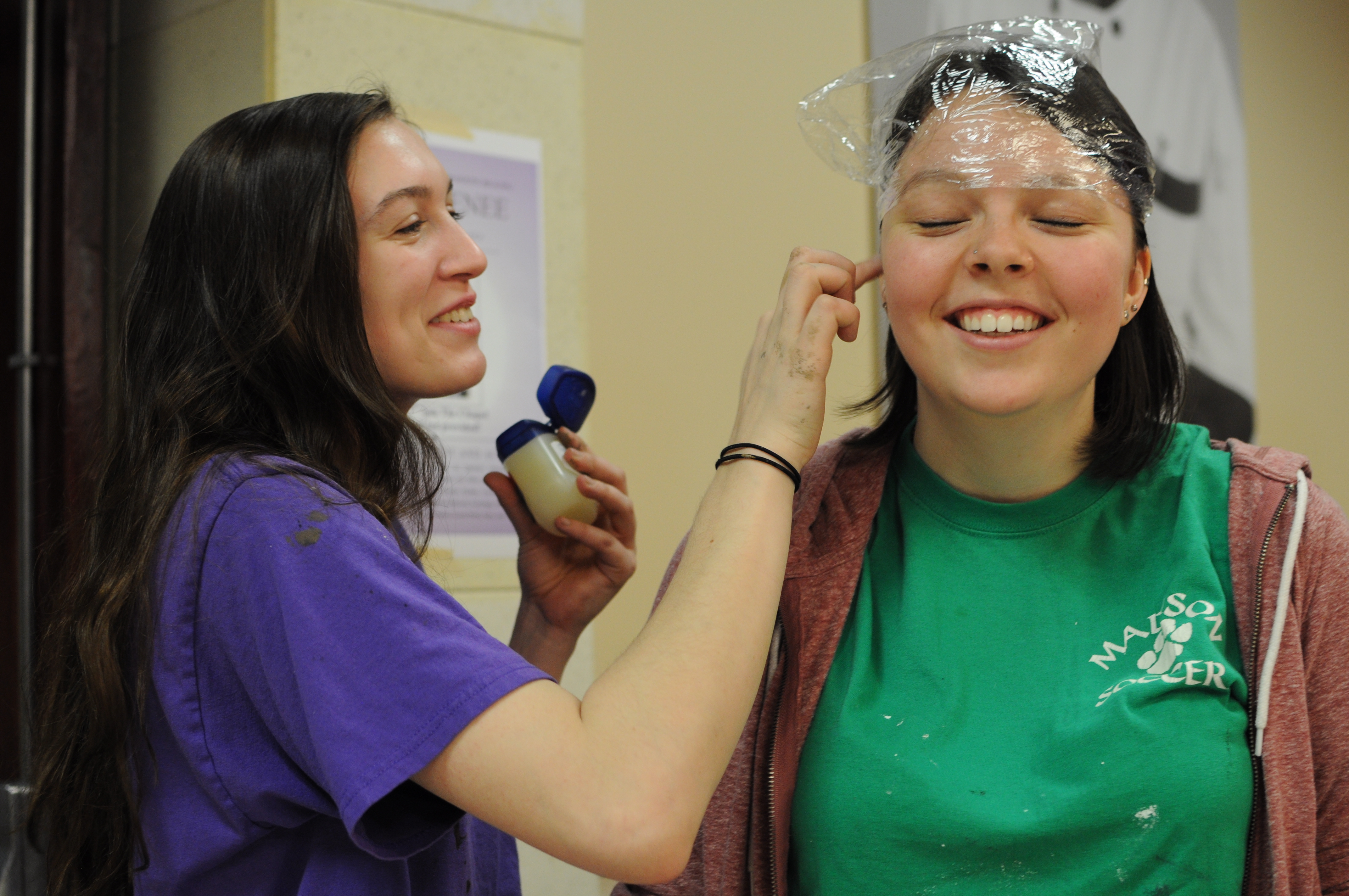 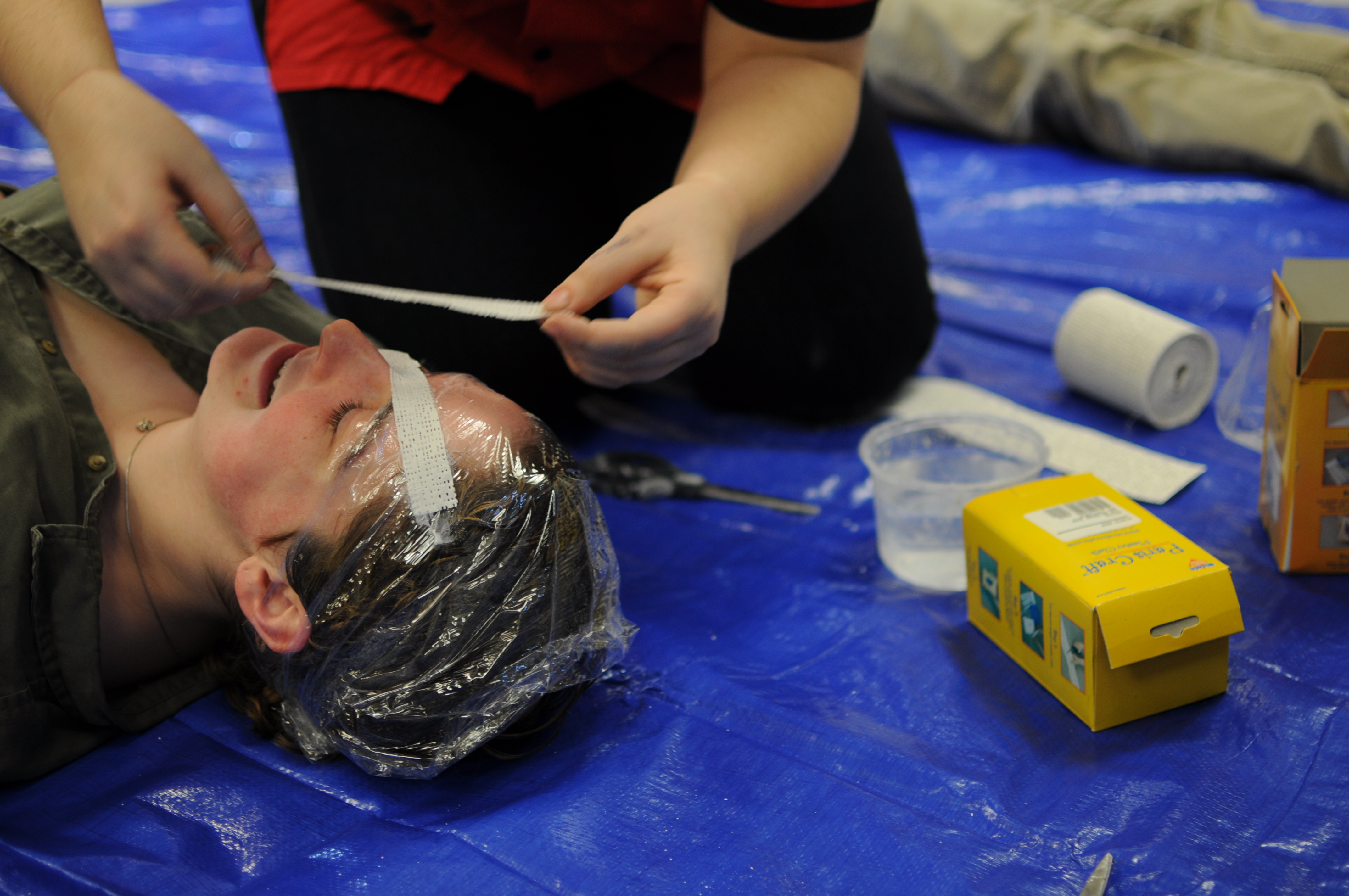 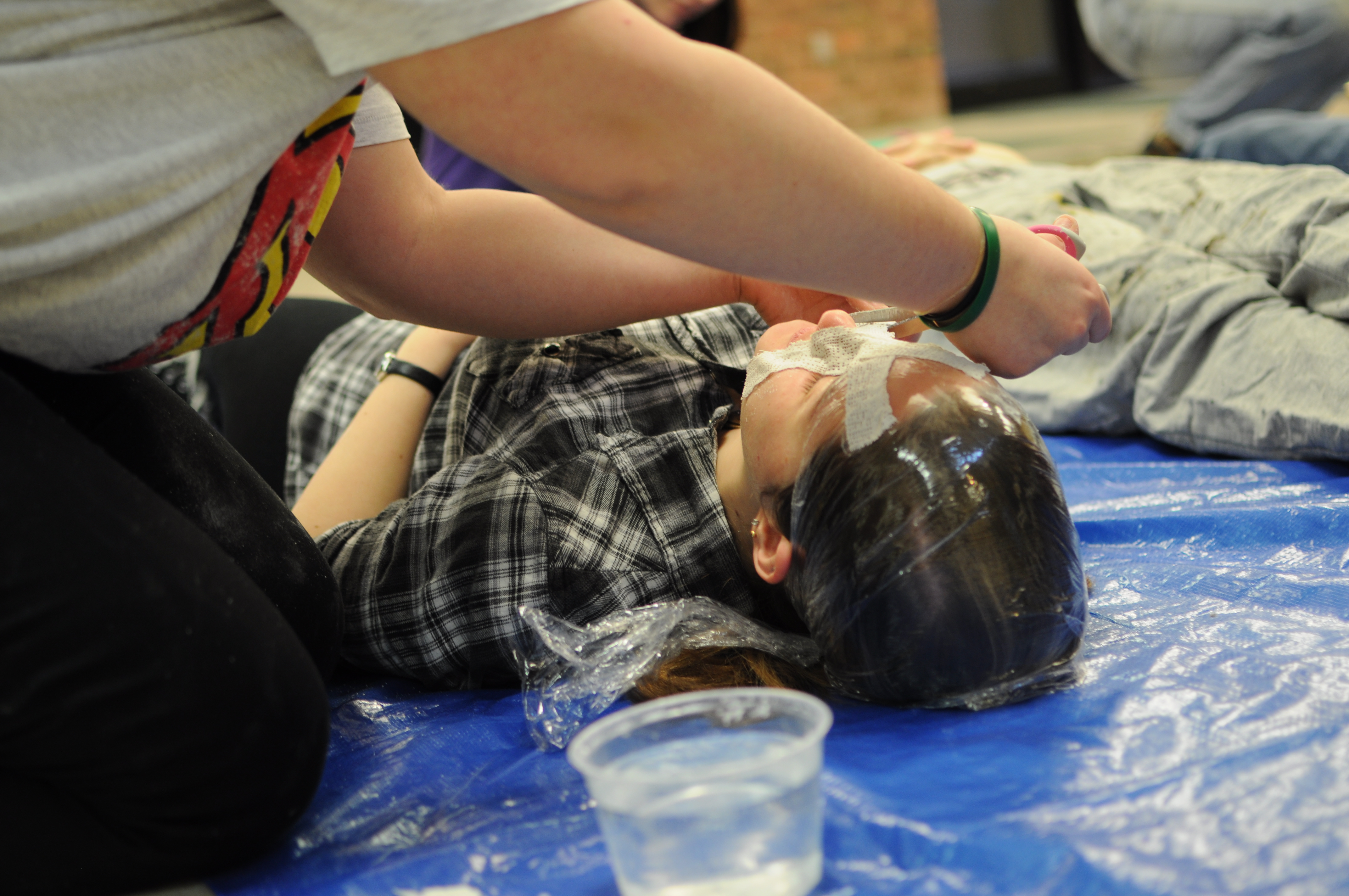 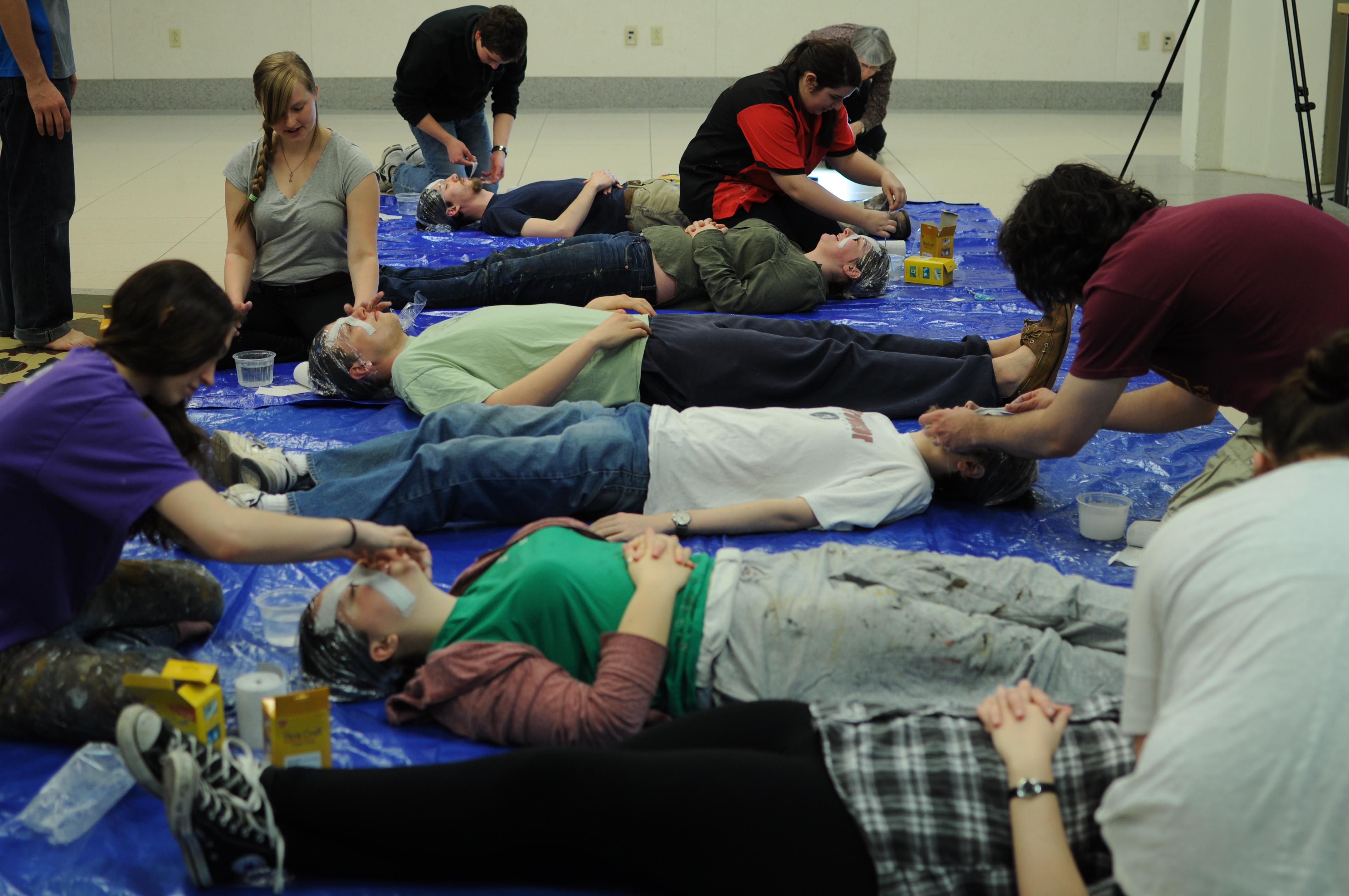 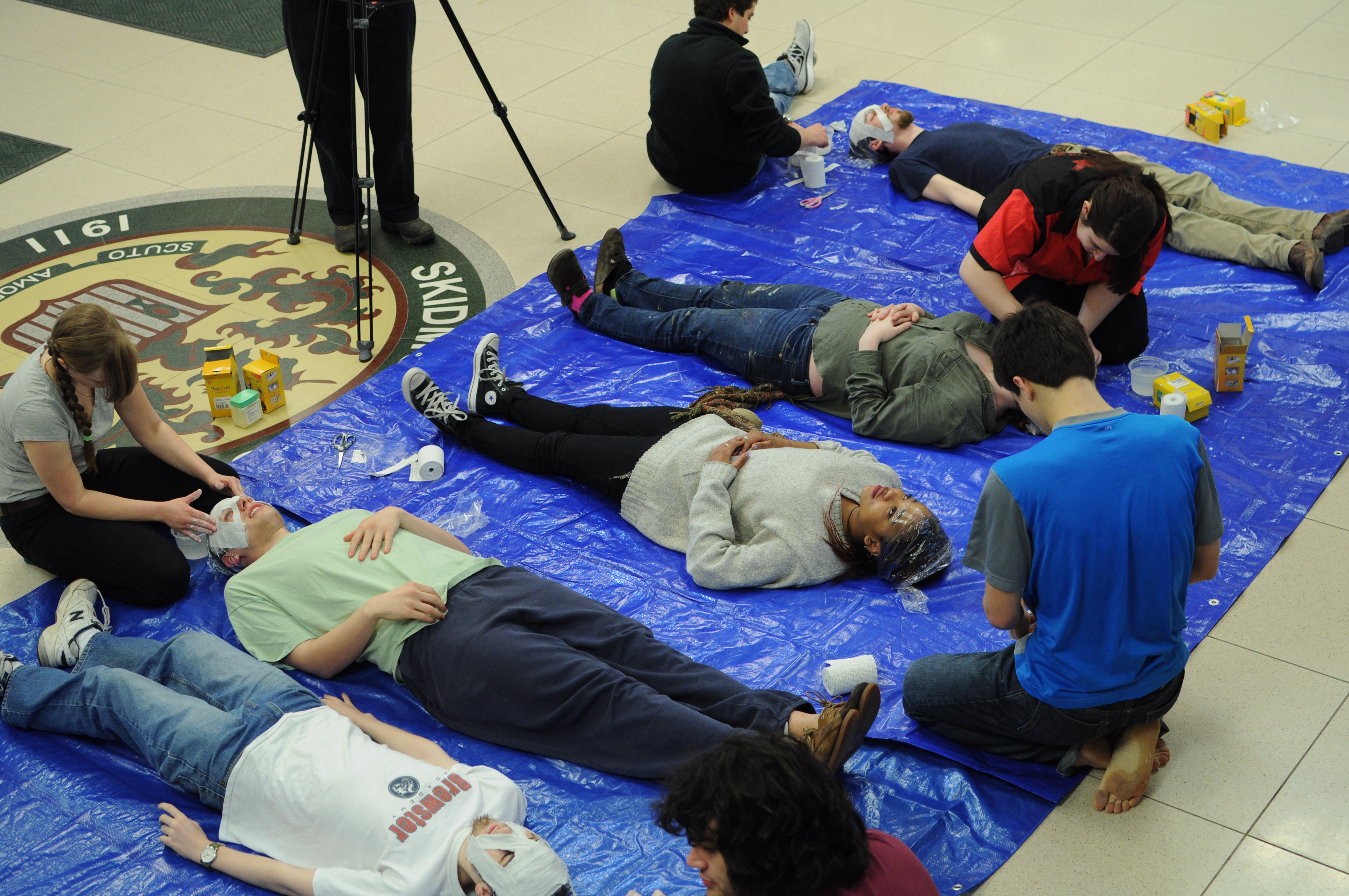 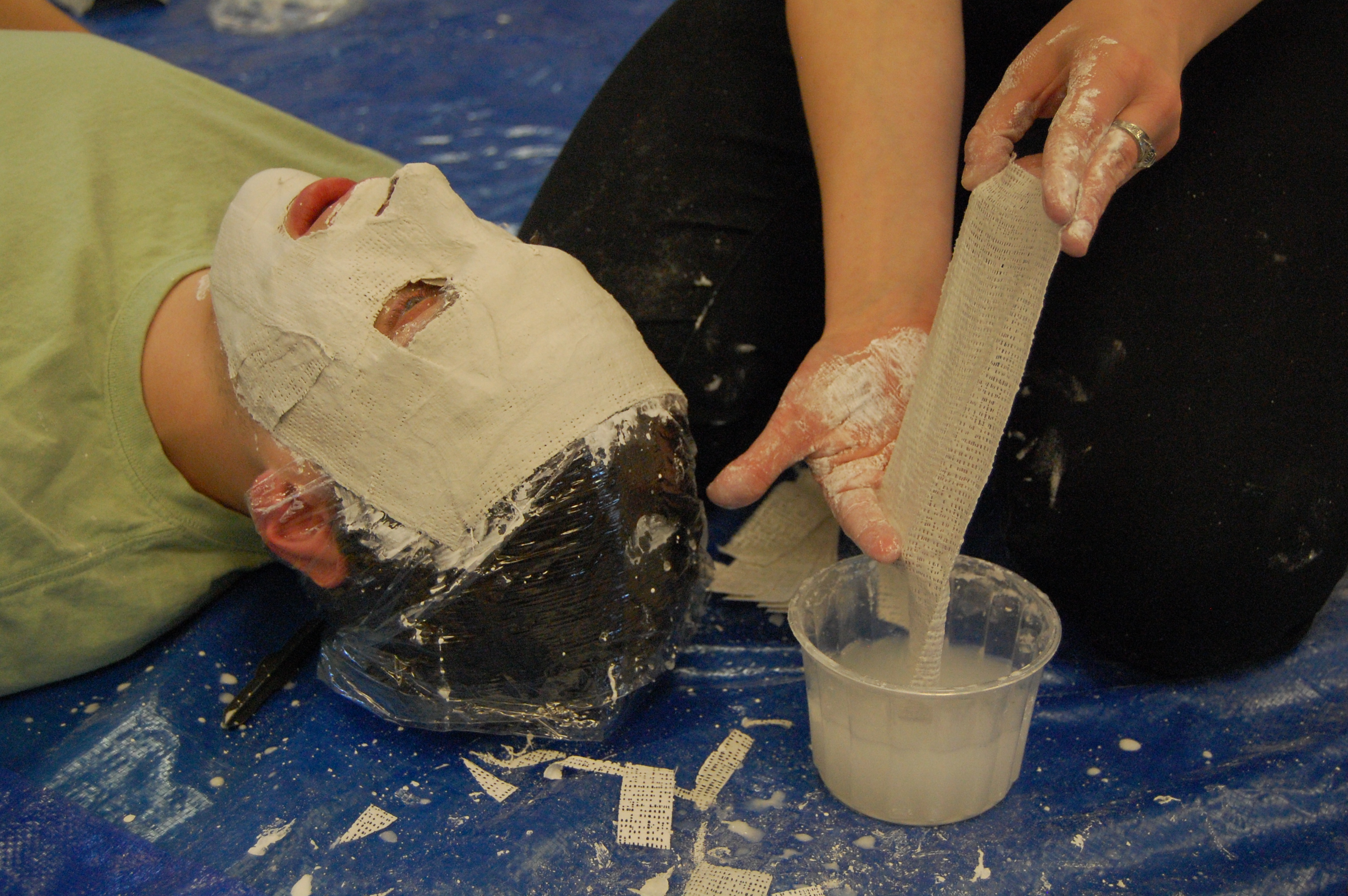 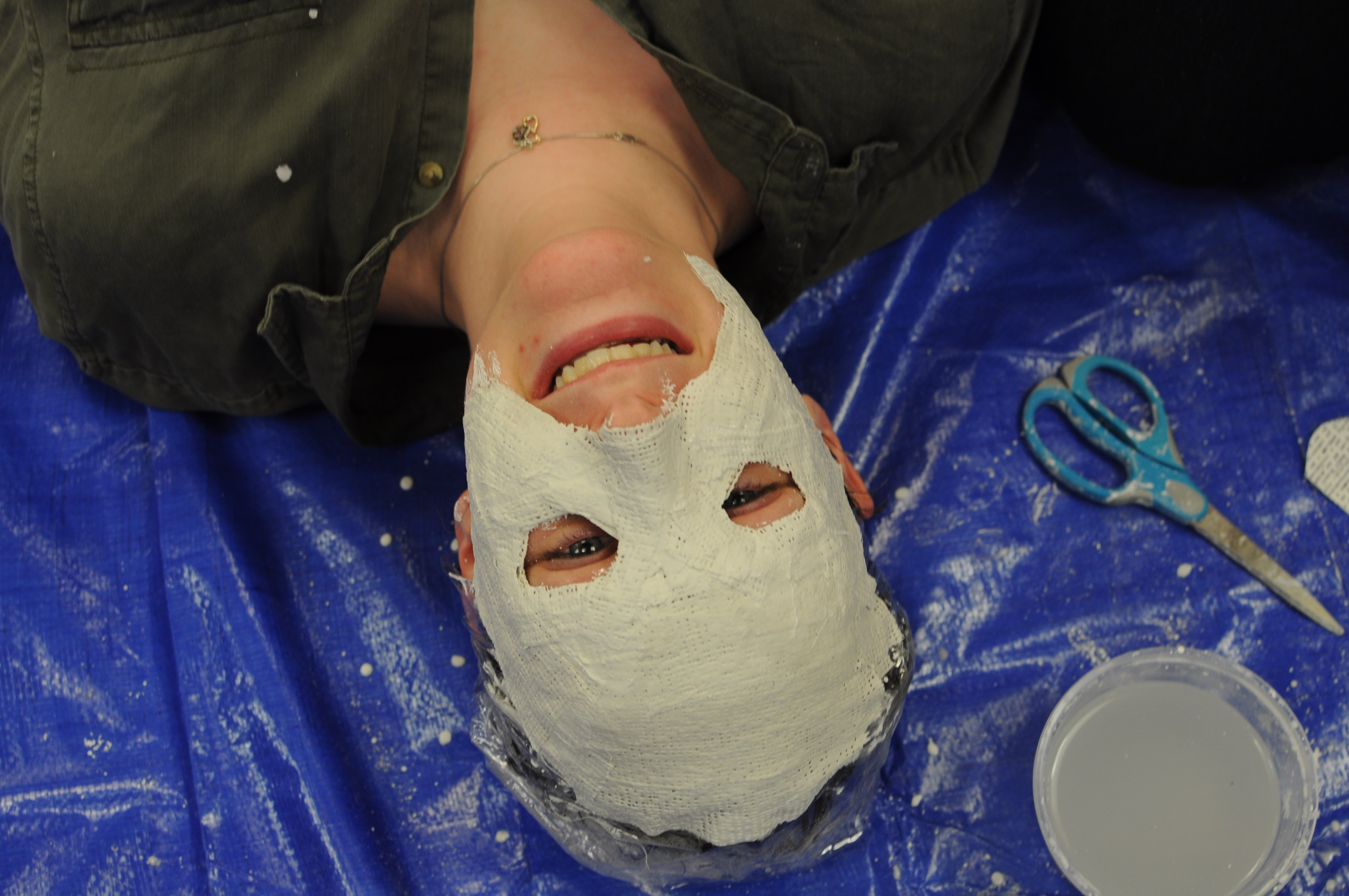 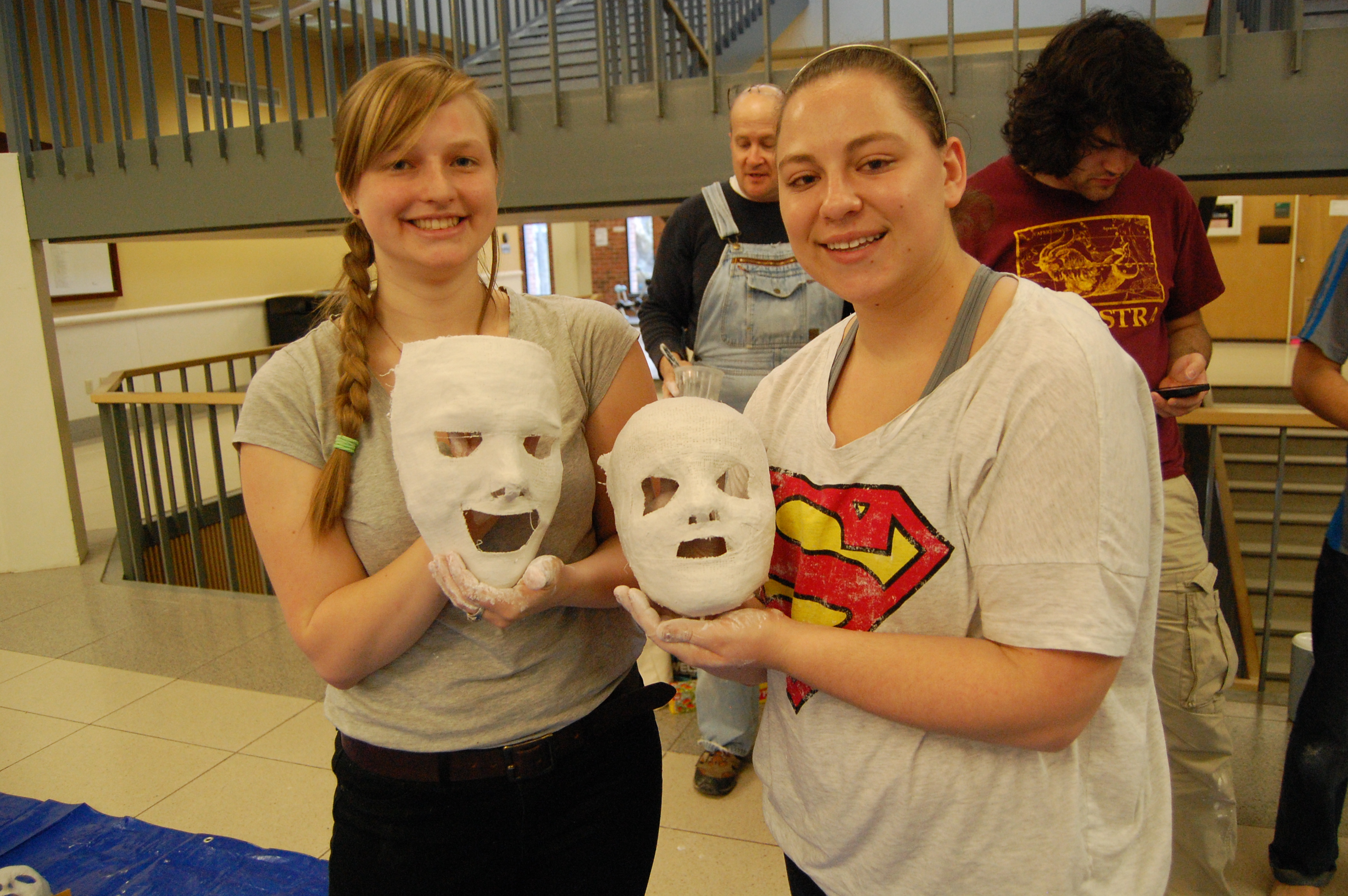 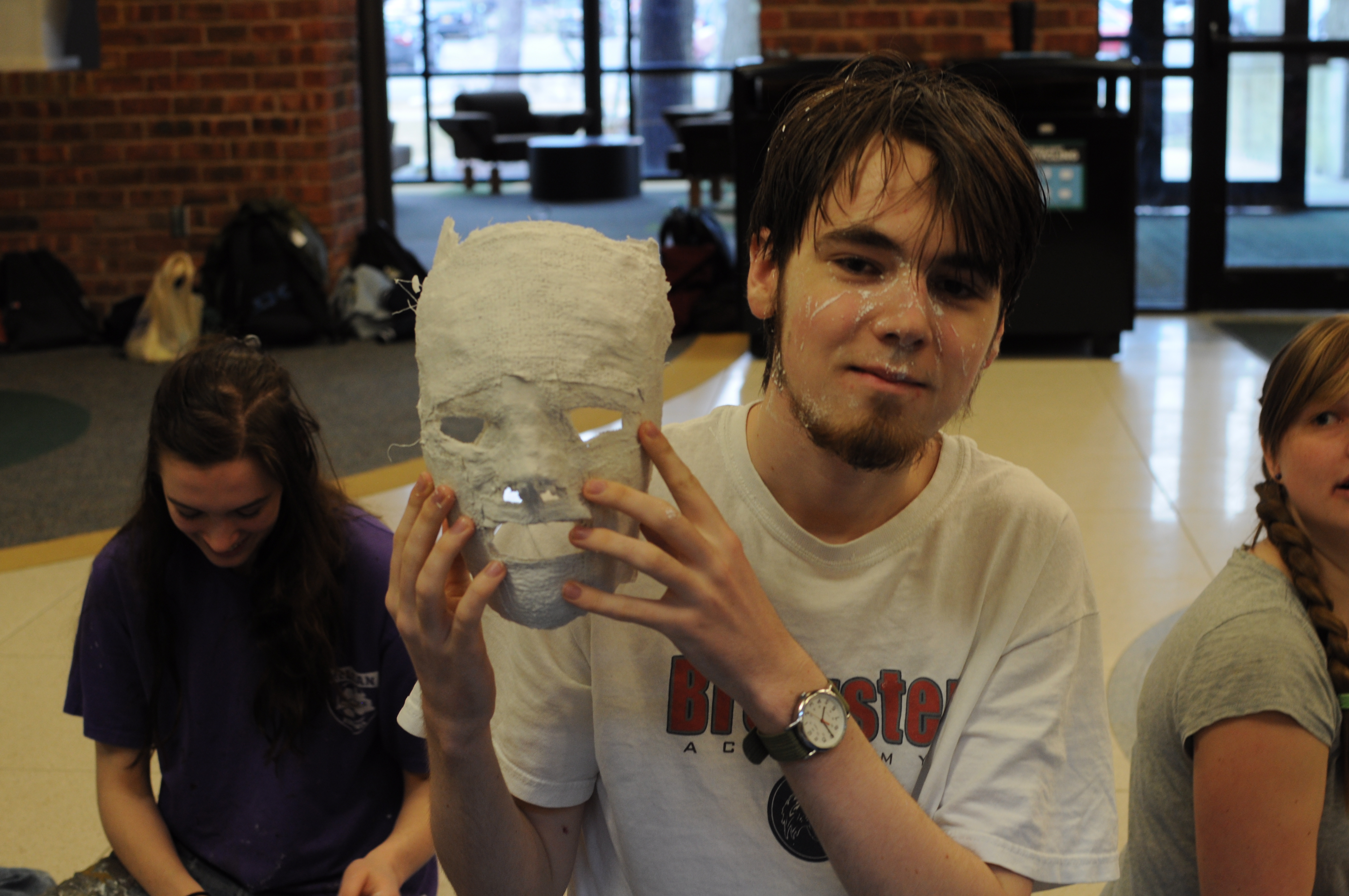 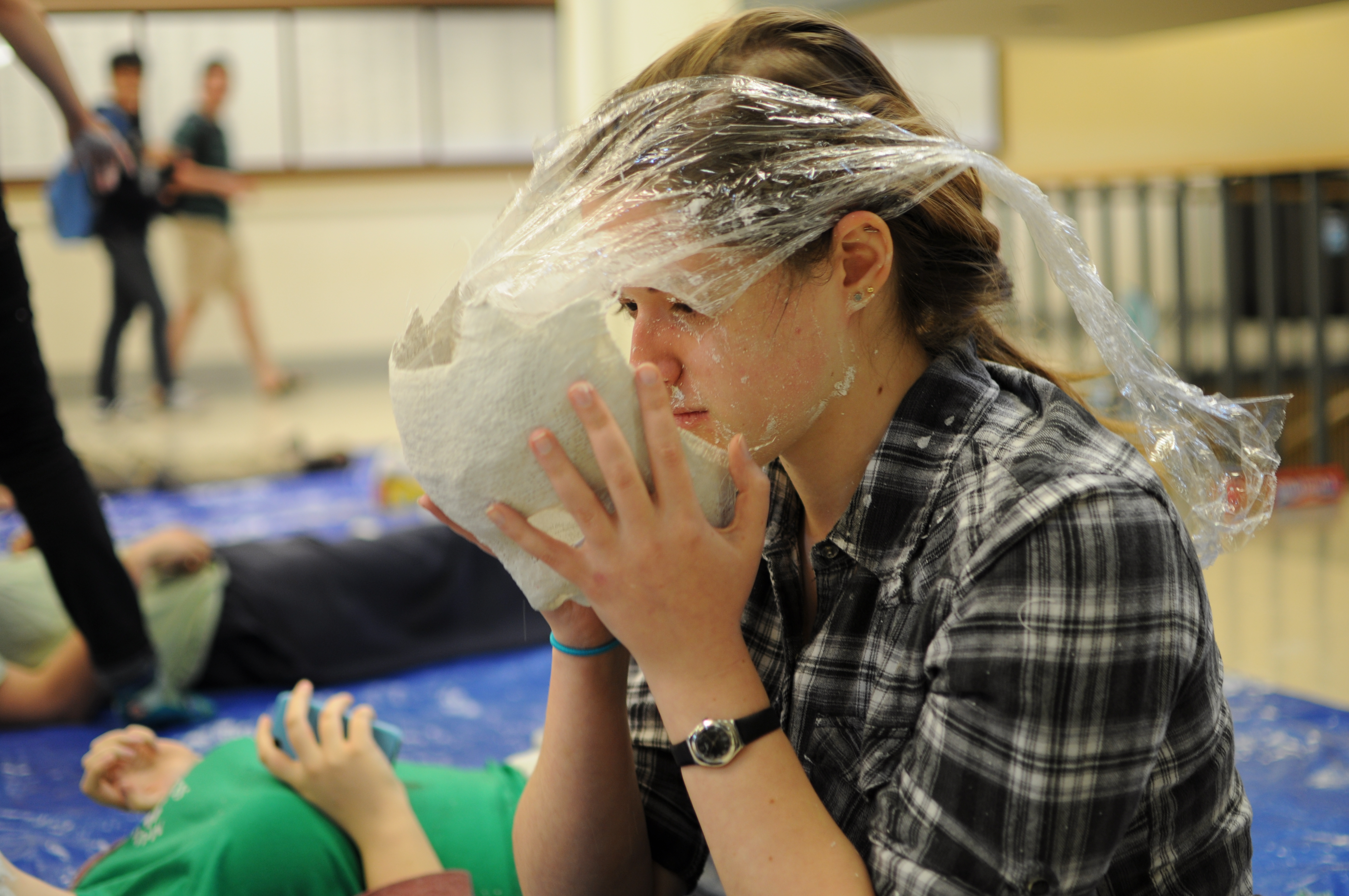 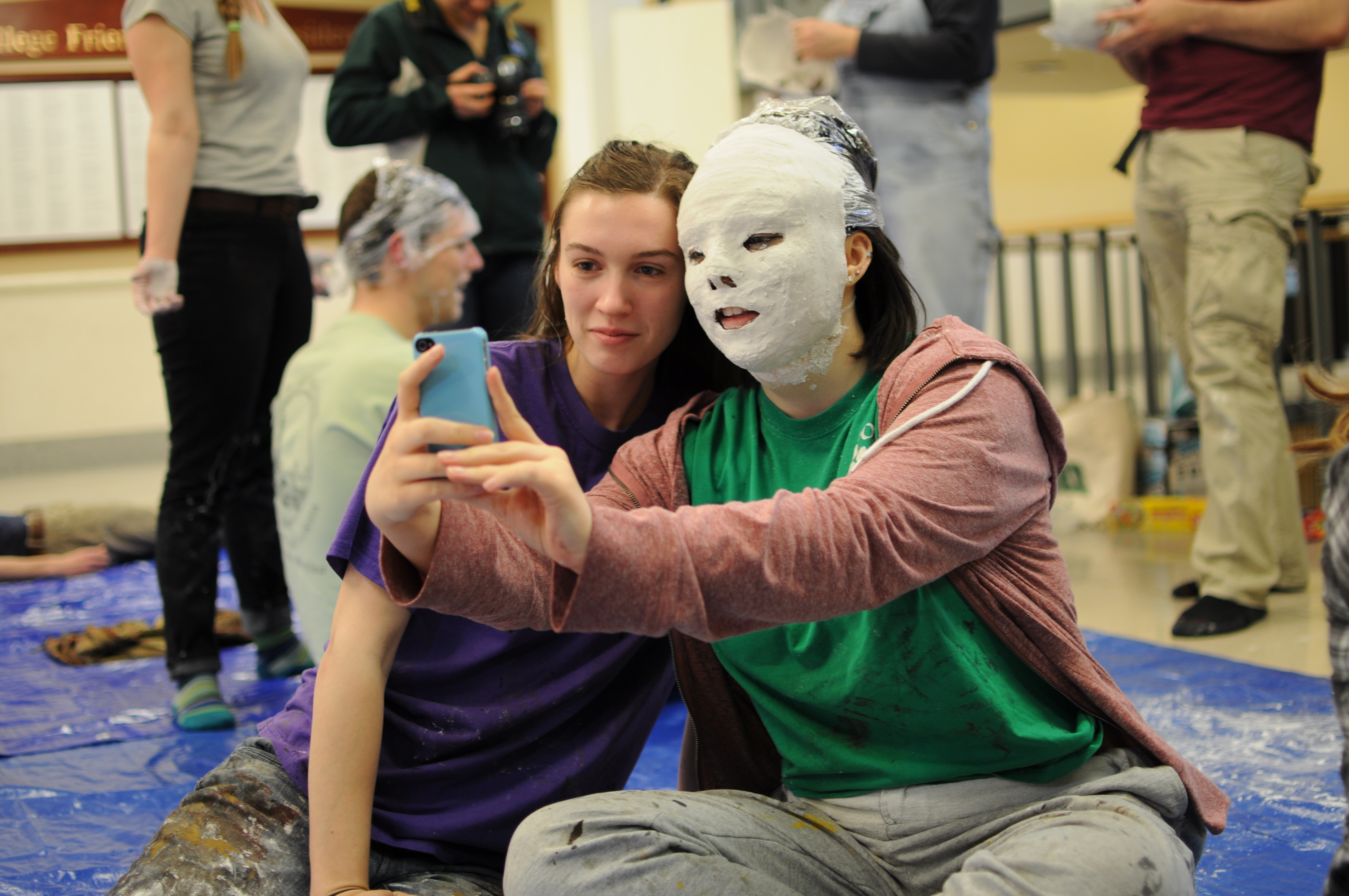 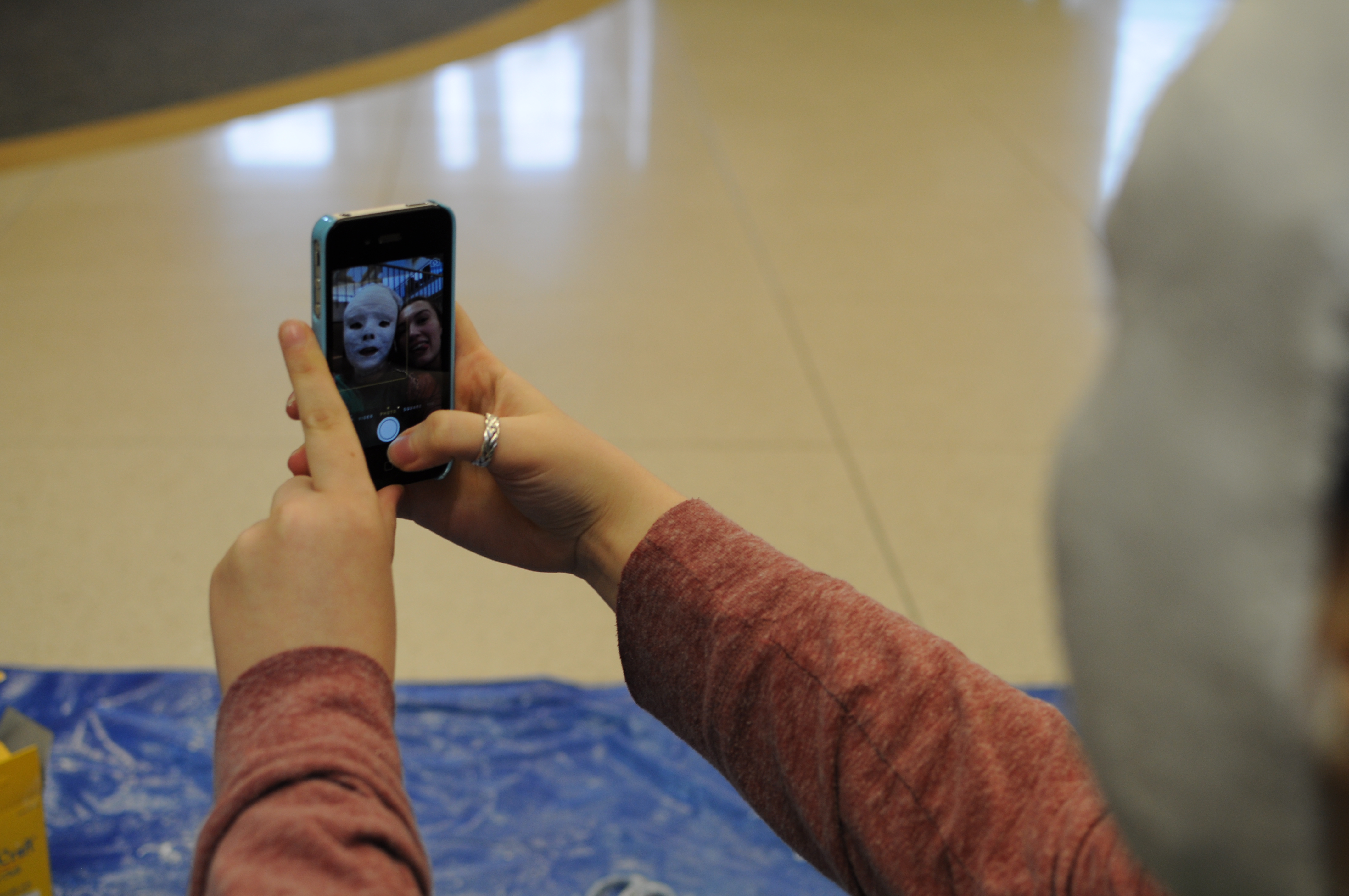 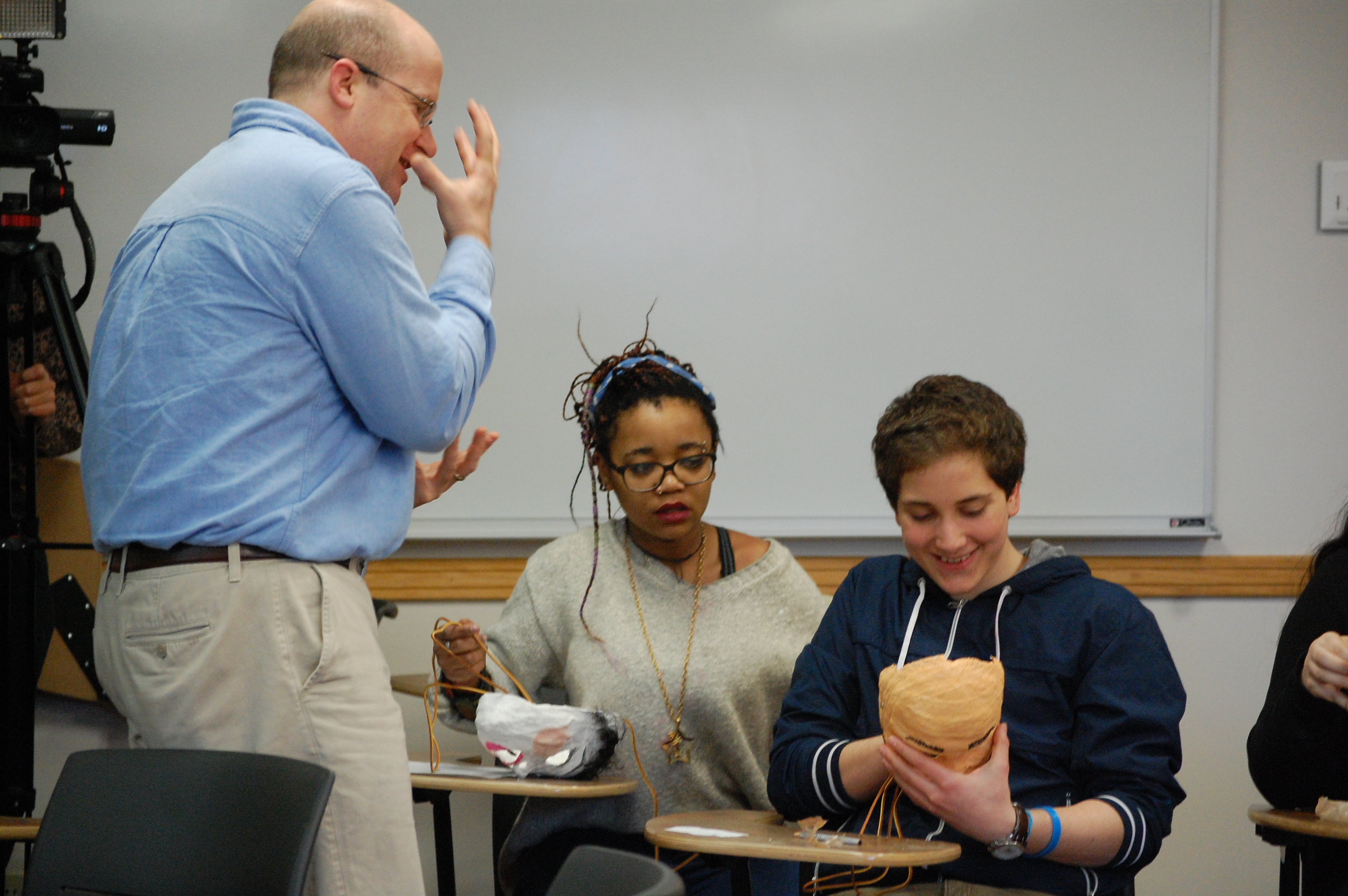 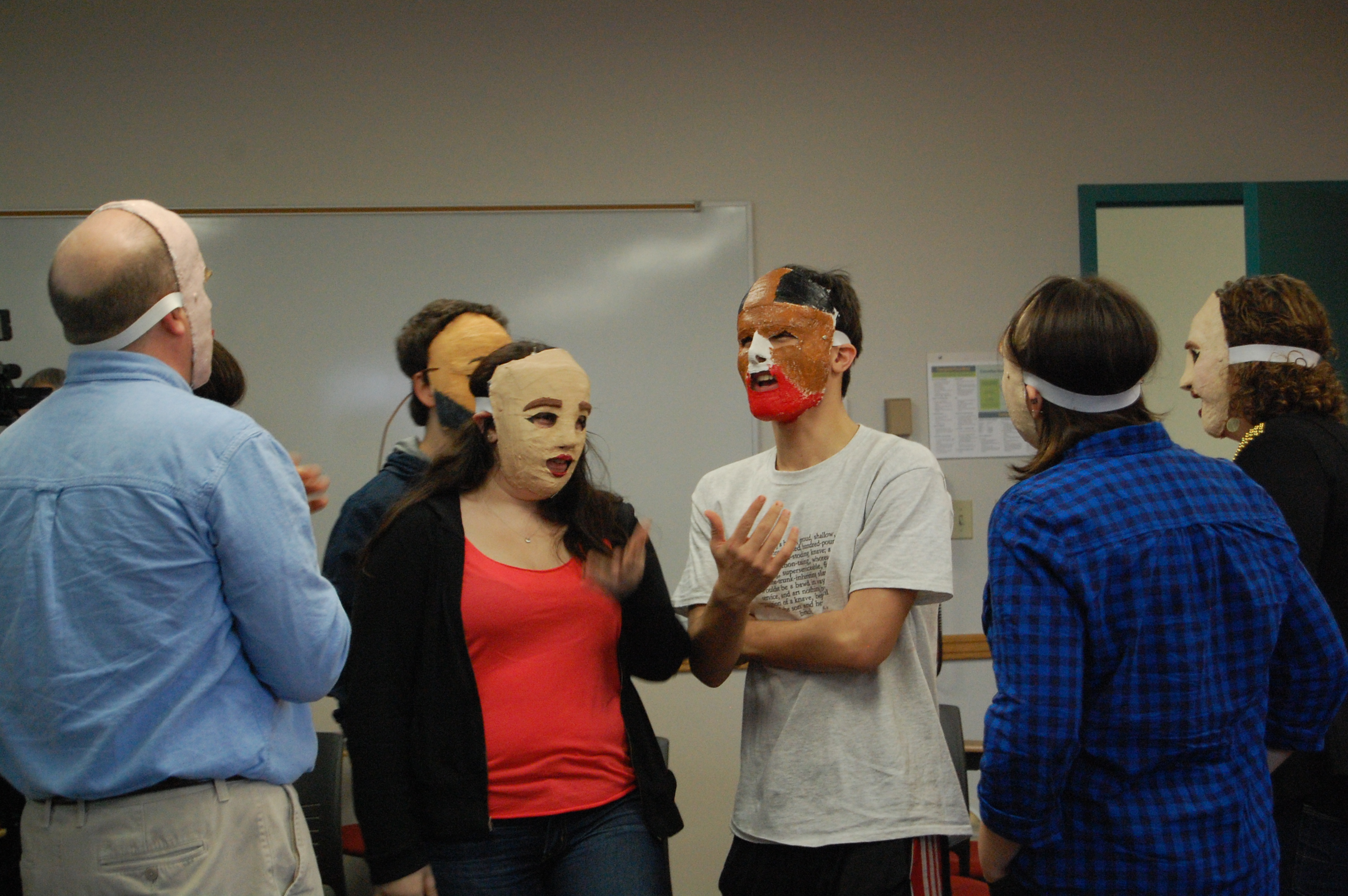 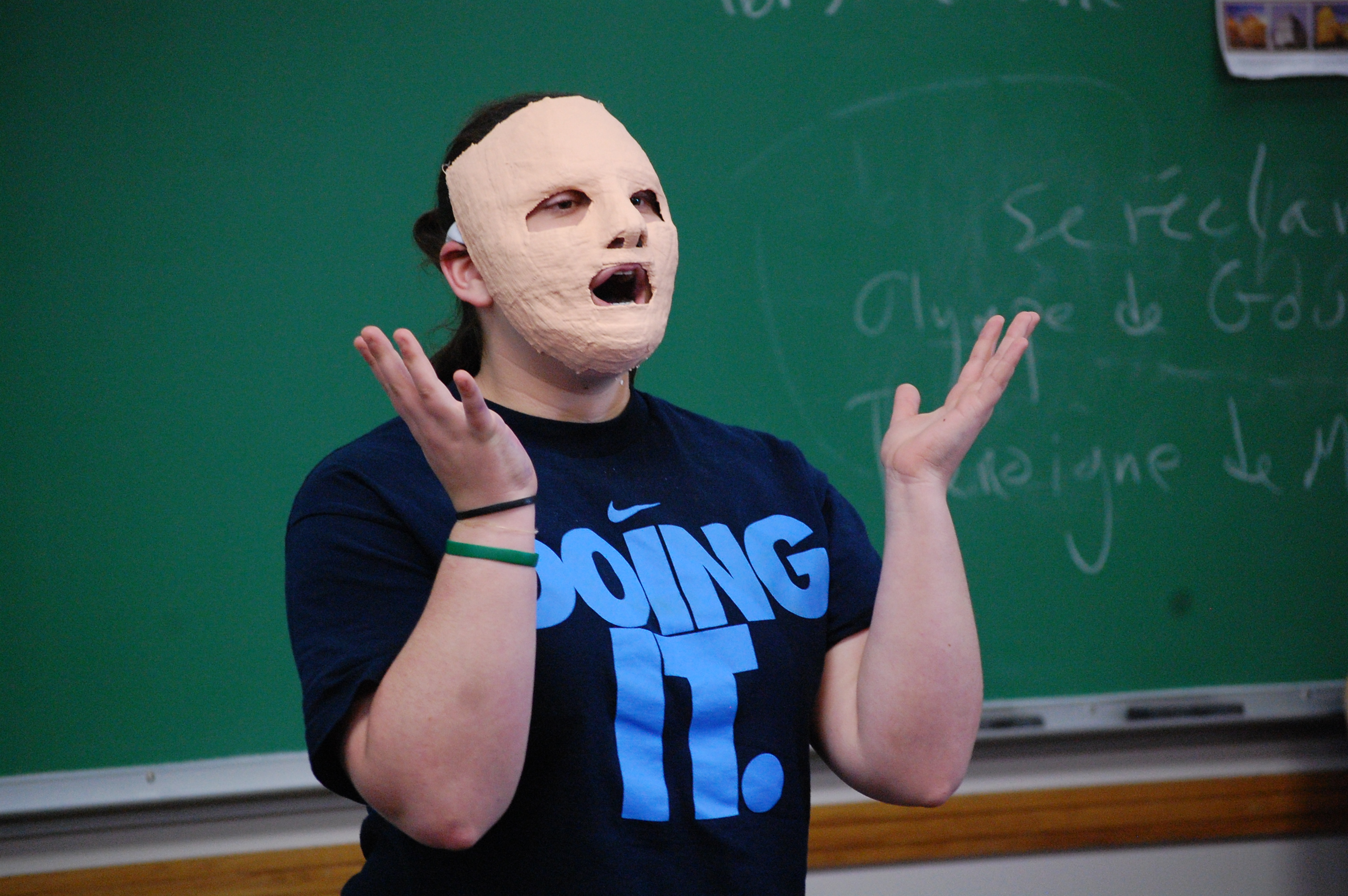 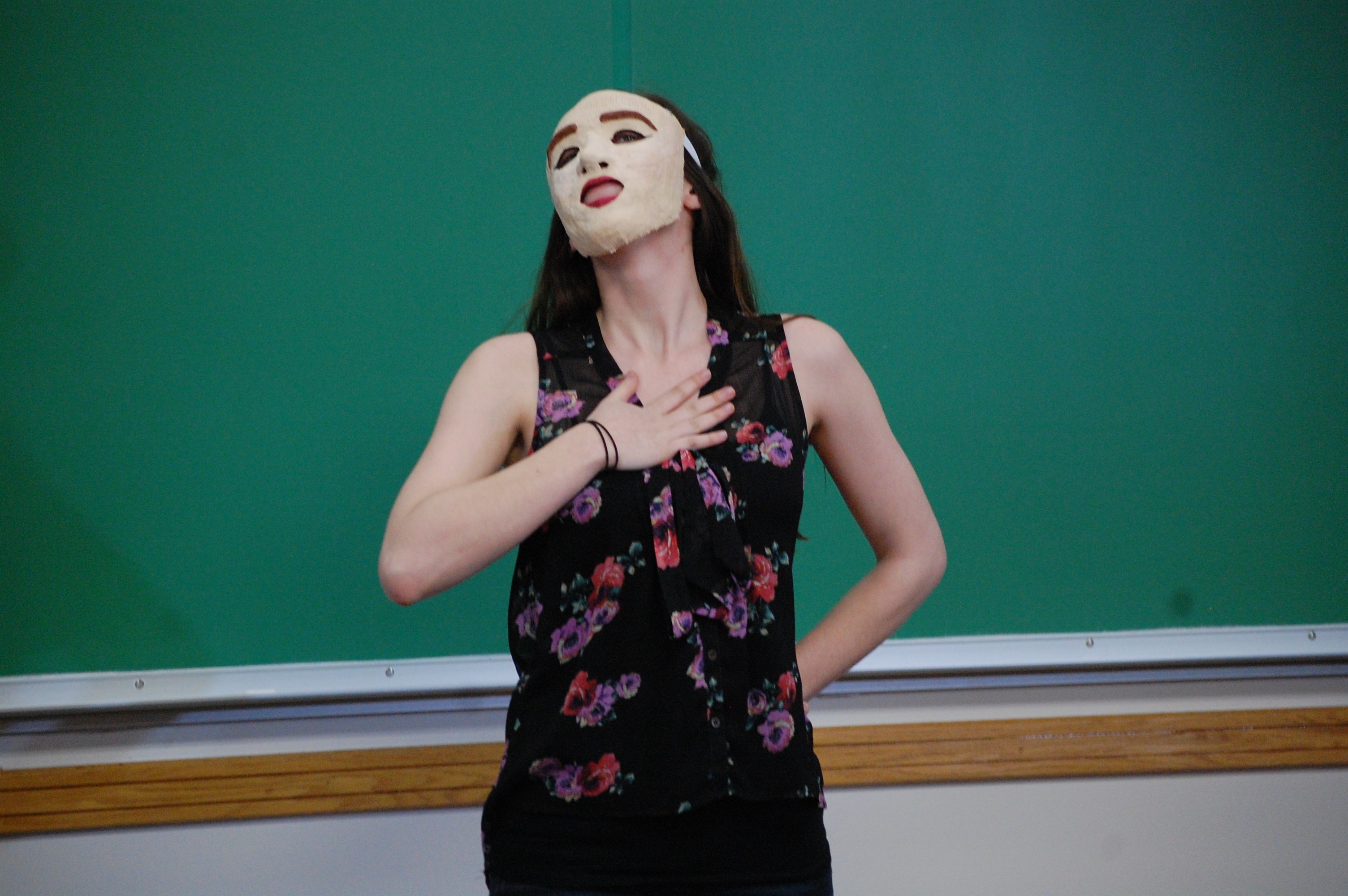 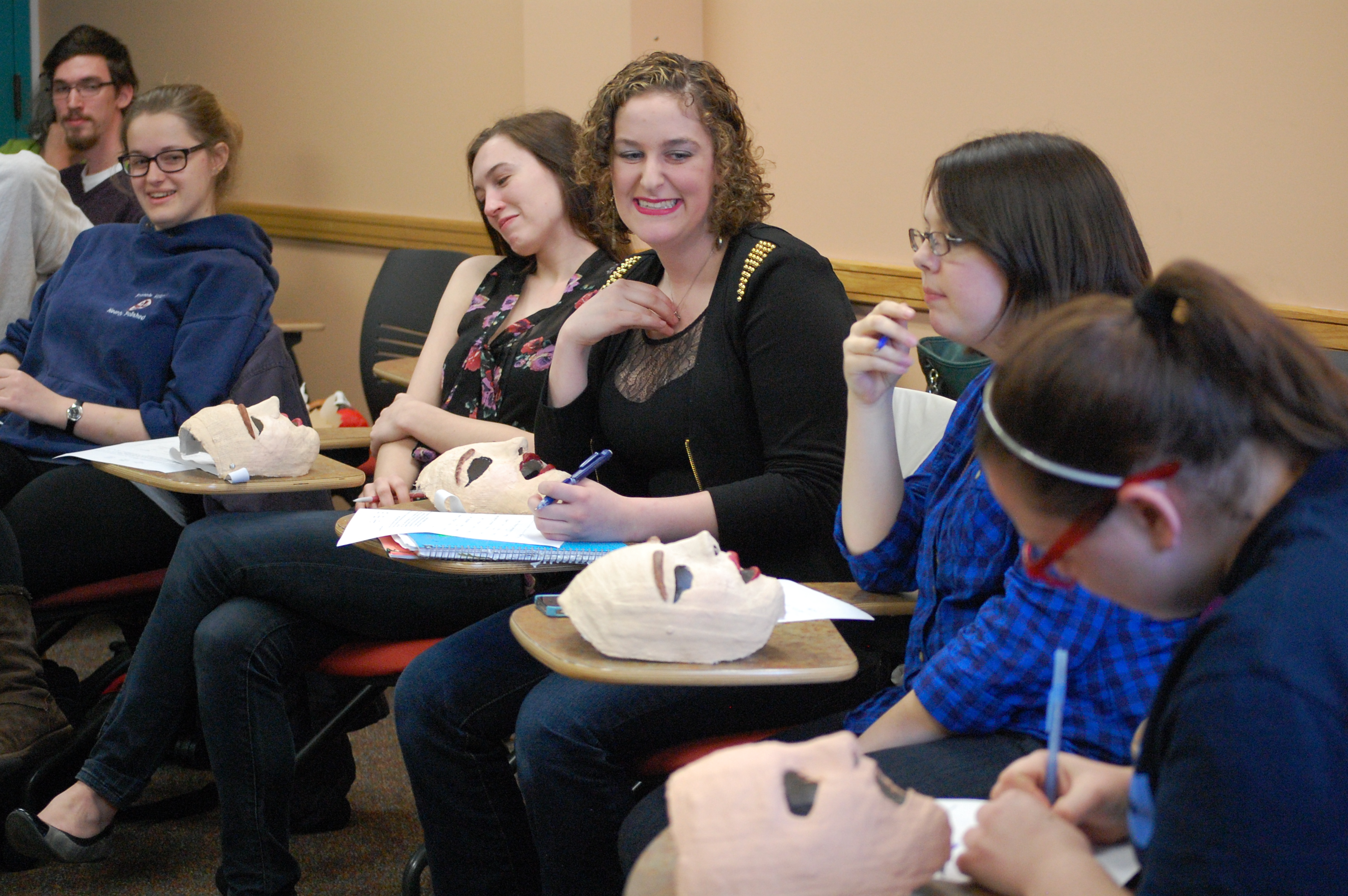 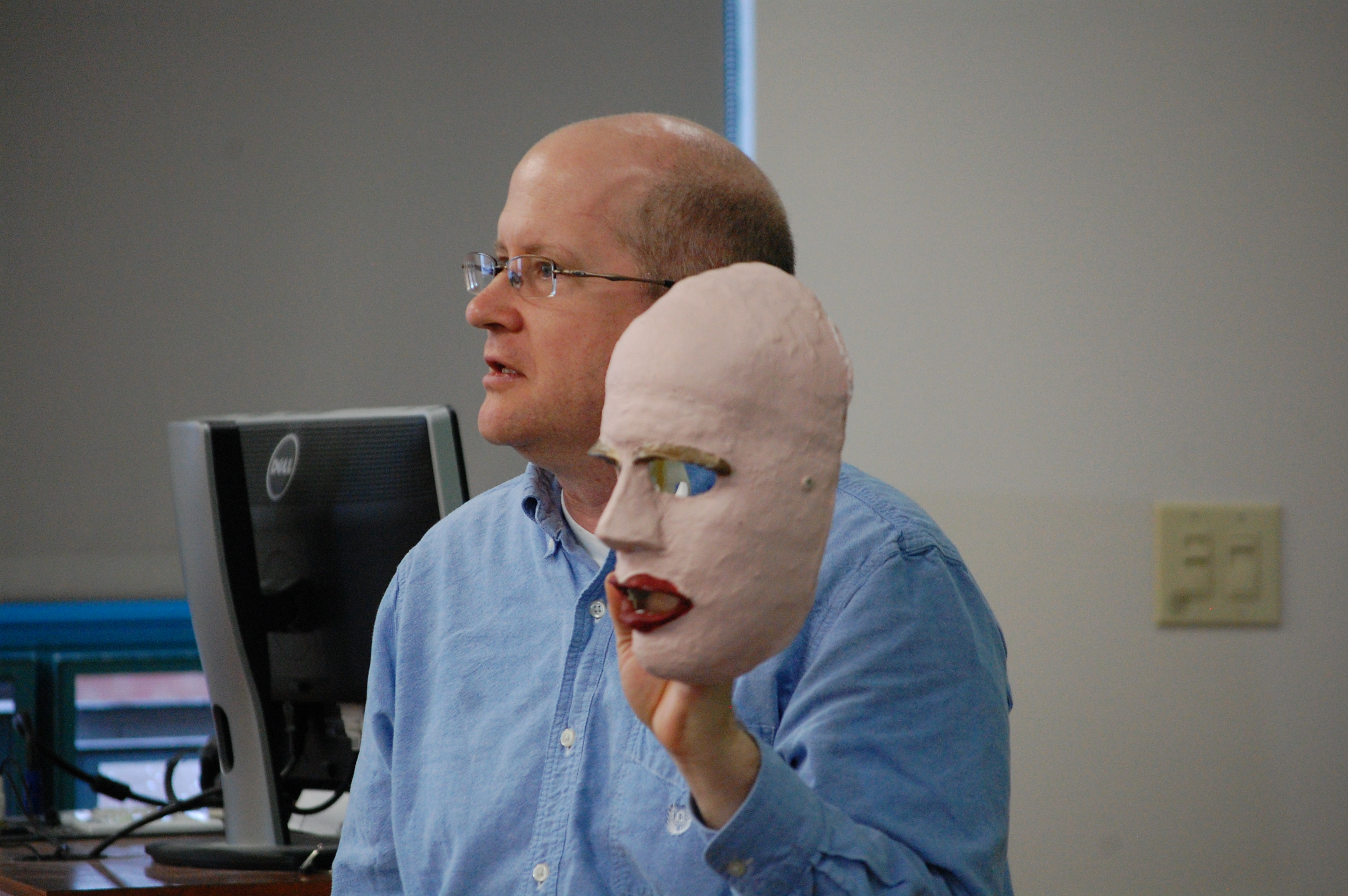 The importance of masks in ancient Greeks’ dramatic toolbox is at the core of an exercise that Dan Curley, associate professor of classics, assigned to the 14 students in his “Greek Tragedy” (Classics 222) course this spring.

In the run-up to the final class project—an original play, The Spearwives, staged April 27 on the grounds of the Surrey Williamson Inn—the students spent two class sessions making their own masks. The project required space, so Curley and studets set up in the Class of 1967 lobby outside of Gannett Auditorium for one meeting, and then outside to the edge of Case Green on a sunny, breezy afternoon for a second session. He spread large plastic tarps, and students stretched out on their backs as their mask-making partners worked over their heads, delicately applying strips of plaster cloth to their faces.

Curley advised the students in advance to tie plastic wrap around the tops of their heads to avoid having the plaster stick to their hair, and he suggested that petroleum jelly be smoothed on faces. “I don’t want plaster in my nose ring, so be careful,” one mask subject advised her partner, as Curley mused, “Facial piercings are an interesting aspect of this project.”

And, in a development that no ancient tragedian could have foreseen, several mask-makers paused to allow their subjects to grab their phones and take a selfie.

Throughout the process, Curley offered advice:  “Make the mouth open, to allow the actor to talk,” he said. “Start by layering diagonal strips across the nose—that will strengthen the mask—and build up from there.” As the students moved from forehead to cheek to jaw, Curley repeated “septum/lip, septum/lip” as a reminder of how to shape the nose.

Allston Daniels  ’15, an English major, agreed that working in sections was critical to mask development—“it makes it easy to build up the cheeks and nose,” he said.

"They get a feel for what they are doing, and their fingers learn,” Curley explained. Hearing the directions repeated helped students stay on task as the time flew.

Feedback was shared throughout the afternoon. Lebogang Mokoena ’17 said, “You get the hang of it. It’s quite fun, and a little like geometry, fitting the small shapes of plaster cloth. I am trying to get the eyes set up and then will reduce or increase as necessary to finish the face.” A double major in anthropology and theater, Mokoena said, “After this course, I am thinking of minoring in classics.” Another first-year, Tameem Samawi, plans to major in physics. The required reading and the portion of the grade placed on the mask—15 percent—made him pause. “But I asked around and people said it was a good course. I like the setup of the class—it’s not as technical as some of my other courses. I ended up looking forward to these class sessions,” he said.

The course drew students from all four years, a number of them theater majors. One, Emma Filer ’15, said, “This is probably my favorite class right now. It’s fun, and I love the reading—I love Greek tragedy.” Christopher Naughton ’17, who is leaning toward a theater major and classics minor, said, “It’s a lot of fun making the mask.” As for being masked, “You get a great appreciation for how still you need to be,” he added.

Making it work was the focus of the classroom session that followed, when masks and acting skills were showcased. Wearing their finished masks, students took turns acting emotions such as joy, sorrow, greed, curiosity, and frustration. Their peers judged how successful they were by guessing each presentation.

When Curley asked, “How does it feel to be in the mask?” students replied, “uncomfortable” and “like Hannibal Lector.” One said, “I feel like I’ve got someone else’s face.” Another added, “Eye contact is creepy” with a mask-wearer. Curley remarked, “Masks make you less natural. People need to read broad actions.” For the audience, he said, “As you watch the movements of the body, the face will seem to change. Light and shadow can also do that.”

Then the students turned the tables on their professor, challenging him to the same exercise in his own mask. Curley agreed after one student promised, “I won’t put this on Facebook.”  Curley demonstrated greed, rubbing his fingers together rapidly; love, with hands over his heart; and disappointment, with a slow headshake. The students responded with positive feedback, guffaws, and a lot of snapshots.

Wrapping up, Curley told the students, “You don’t want to descend into cliché. Let the mask do some of the work. Slowing your movements can help.”

When he first started teaching this class in 1998, Curley would buy masks for the students, but he began incorporating mask-making as a course assignment because “it’s a great team builder,” he said. The masks support the final project, a Greek tragedy in English, written by the students using classical formats and subject matter from the plays they studied during the term. The goal is to deepen the students’ knowledge of the genre on many different levels, from narrative to presentation to reception.