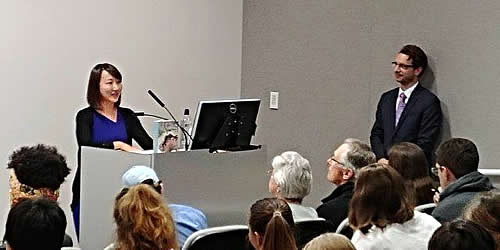 The first session, labelled “Women, Monsters, and The End of Days,” included papers from courses on ancient sex and gender, apocalyptic literature, and Ovid’s poetry: Marley Amico ’10, “It’s all Greek to Me: An Examination of the porne/hetaira Binary”; Kat Berg ’18, “Looking Towards the End Times: Eschatological Imagery in Hieronymus Bosch’s Painting and John of Patmos’ Revelation”; Sophie Heath ’18, “Dealing with Monstrosity: Receptions of Ovid’s Metamorphoses”; and Sarah Smith ’20, “Spartan and Athenian Women.”

Parilia, the annual undergraduate Classics conference, on Friday, April 20th, was hosted by Union College, which welcomed students and faculty from Hamilton College and Skidmore. The following students presented their work as either papers or posters:

Shot on location in Greece, this provocative work projects a journey of homecoming (nostos) onto Penelope, the wife of the well-traveled Homeric hero, Odysseus. Quotes from Homer's Odyssey and authorial commentary anchor segments that fluctuate between cinematic subjectivity and invasive camerawork. Penelope’s "home" is both a tangible, comforting habitat and an internalized dwelling of estrangement.

The David H. Porter Classical World Lecture honors David Porter for his contributions to the College as former president, to the Classics Department as emeritus professor and inaugural holder of the Tisch Family Distinguished Professorship, and to the humanities at large. The event is a highlight of the spring term and part of the Department's gateway course, CC 200: The Classical World. The lecture was co-sponsored by the Film & Media Studies and Gender Studies programs.

The Classical World students hosted the annual Homerathon! on February 8th, 600pm, in Murray-Aikins Dining Hall. A wonderful turnout, superb readings, and a lovely dinner filled out the evening for a sizeable and enthusiastic audience.

Homerathon! (a marathon reading of the Greek poet, Homer) is a time for students, faculty, staff, and other friends to gather in celebration of our earliest Western poet.  Coupled with our Classical World course (CC 200), the Homerathon! reminds us that the ancient art of storytelling is alive and well.

On Wednesday, Oct. 18, 530pm, in the Somers Room in the Tang, we welcomed Bret Mulligan, Associate Professor and Chair of Classics at Haverford College, to deliver a lecture. Titled "Drunken Poets and Fallen Philosophers: Gout and Pathographic Identity in Antiquity," Prof. Mulligan's addressed disease as a metaphor. Here's how he described his talk:

“Disease has often been understood as a manifestation of more than simply bodily infirmity. In the most stigmatizing circumstances, the presence of disease can become an external marker of deficient character or even just retribution for the moral failure of the afflicted." Prof. Mulligan explored what it means when a literary or historical figure in antiquity is characterized as suffering from gout. The attribution of gout carried with it a moralizing charge that enmeshed the subject in familiar categories of excessive consumption and loose moral character.

Prof. Mulligan works on late antiquity, which he describes as “the twilight of classical culture.” His publications focus on Roman poets and biographers of the later Roman Empire, and the lecture was part of a larger project on gout as a metaphor of disease.