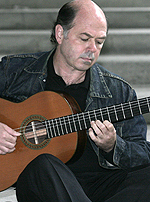 “…sensuality and emotional warmth characterize his extraordinary musicianship. He makes music that both soothes and excites. It is the union of opposites that makes Brown so special.”  (Albany Times-Union)

Guitarist Joel Brown's actively eclectic performances as a soloist and chamber musician have included appearances with the Chamber Music Society of Lincoln Center, the Festival of Contemporary Music at Tanglewood, the Saratoga Chamber Music Festival, the Caramoore Festival, and the Killington Festival. Internationally, he has played in British Columbia at the Music in the Mountains Chamber Music Festival, in the Czech Republic at the Mikulov Guitar Festival as concerto soloist with the Martinu Chamber Orchestra, and in Asia with the Singapore Chinese Orchestra. Notable appearances in the United States include Carnegie Hall with soprano Dawn Upshaw, recitals on both coasts with mezzo-soprano Frederica von Stade, and with the Boston Pops Orchestra. Brown has also performed on NBC’s Today, CNN’s Showbiz Today, on NPR, and on the BBC.

Brown is the founding member of Tritonis, a flute, guitar and cello trio that appeared at the Guitar Foundation of America conference in Miami, at National Flute Association conventions in New York and Boston, and in universities and recital halls across the nation. Brown also commissioned new music for their critically and internationally acclaimed CD, Five Premiers—Chamber Works with Guitar (Albany).

Brown performs regularly as a member of Chris Brubeck’s Triple Play, a crossover group blending jazz with blues and folk music. The trio has played in almost every state of the Union, and in 2006 performed at the Monterey Jazz Festival with the legendary Dave Brubeck Quartet. Their CDs—Triple Play Live and Watching the World (Blue Forest Records)—have won them fans around the world.

Joel Brown is a Senior-Artist-in-Residence at Skidmore College in Saratoga Springs, New York.