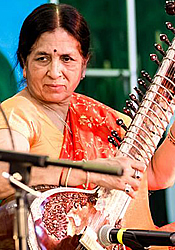 Veena Chandra is an internationally renowned sitarist, composer, teacher, and choreographer. She is the founder and director of the Dance and Music School of India in Latham, NY (celebrating 34 years) where she teaches Indian classical music. She has been a faculty member at Skidmore College since 1990, teaching sitar in the Music Department. She has been Artist Associate in Sitar at Williams College since 2014.

Born in Dehra Doon, the Valley of the Himalaya Mountain Range on November 30th, 1944, Veena was inspired to play music by her Father, her first Guru. He loved sitar so much that he named her Veena, after the precursor instrument to the sitar, in hopes that she would learn music. He was 95 years old when he passed away in 2010 and his hopes have validated themselves many times over as evident by the international acclaim & respect given to Veena Chandra.

She continued learning sitar with Shri Satish Chandra, a disciple of Ravi Shankar. Being invited by Pt Ravi Shankar to his concerts she was inspired by his music. She earned master’s degrees in music (ranking third in the entire country of India in MMUS). She also has a masters in sociology and a bachelor’s degree in teaching. She has been in the international Who’s Who since 1997. Mrs. Chandra has taught at Agra, Dayalbagh universities and colleges in India teaching sitar and sociology. She has been performing and teaching sitar for the last 65 years. She continued her advance training under the late Ustad Vilayat Khan Saheb. Ustad Vilayat Khan Saheb very much enjoyed listening to her Sitar and grew very close to Veena and her son Devesh.

She is a recipient of a New York State Folk Art Grant 2003, and Artists Decentralization Grant and several SOS & Meet the Composer grants. Currently she does lecture-demonstrations and performances at numerous performance halls, music festivals, colleges, universities, & schools in the U.S. and India. She has received artist award as a composer through the Albany League of Arts in 2002. She has received several years of Community Arts Grants (2000, 2001,(2008–2021 through The Arts Center of the Capital Region and NYSCA. She has several CDs to her credit, including two very popular recordings with renowned Pandit Bikram Ghosh on tabla. Veena Chandra’s 2009-2010 India tour was in part sponsored by NYSCA and The Arts Center of the Capital Region. In December of 2018, Veena received the SRIJAN Music Excellence Award “in recognition of outstanding contribution in the field of Indian Classical Music”.

She received New Music USA award for her collaboration with Taina Aisli 2017.

She received a New Music USA award in 2020 for collaboration with Violinst Jessica Taffet.

She also received a NY Folklore Society award for apprenticeship 2021.

Veena Chandra has a rare ability to communicate the beauty and complexity of North Indian Classical music to the western listener. She is noted for her skill and sensitivity in the meend (bending of wire) and her ability to produce vocal sounds on the sitar. She characterizes the music of the sitar and tabla as relaxing and reflective of instincts and emotions. She explains that there is a triangular relationship between the artist, the art and the audience. She blends herself into the art and presents herself to the audience through the music. The power in her music is vitalizing and healing to the body, clarifying to the mind, and food for the soul. Listening to her magnificent, heavenly music on the sitar will not leave you untouched.