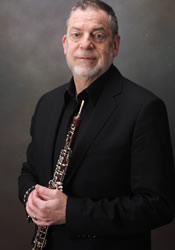 Randall Ellis attended the North Carolina School of the Arts and the State University of New York at Stony Brook where he studied with Ronald Roseman. He served as principal oboist of Lincoln Center’s Mostly Mozart Festival Orchestra from 1988 until 2016. He is principal oboist of the Little Orchestra Society and the Mozart Orchestra of New York and is solo English horn in the New York Pops Orchestra. He is a member of Windscape Woodwind Quintet, artists in residence at the Manhattan School of Music. Randall is a member of the Emmy award-winning All-Star Orchestra under the music directorship of Gerard Schwarz. Mr. Ellis is principal oboist and faculty member of the Eastern Music Festival. He was principal oboist of the New York Chamber Symphony and received two Grammy nominations, including one for his recording of Howard Hanson’s Pastorale. He has performed with the New York Philharmonic, Seattle Symphony, San Diego Symphony, Florida Orchestra, and the American Symphony Orchestra. Mr. Ellis has appeared as a guest artist with the Orpheus Chamber Orchestra and has concertized and recorded with the Chamber Music Society of Lincoln Center. He has been a soloist with the New England Bach Festival, the International Bach Festival of Madeira, the Philharmonia Virtuosi of New York, and Chamber Music at the 92nd Street Y. Mr. Ellis has freelanced with the Ensemble Wien-Berlin, Orchestra of St. Luke’s, the New York Philomusica and the Orchestras of the Martha Graham, Paul Taylor, and the American Ballet Theatre dance companies. He has appeared on NBC’s Today Show, CBS’s Sunday Morning, and many times on PBS’s Live from Lincoln Center. His performances have been heard on National Public Radio, European radio, and NHK Radio and TV in Japan. Mr. Ellis has recorded for EMI/Angel, Columbia, Sony, RCA, Vox, Nonesuch, CRI, Pro Arte, Delos, and Deutsche Grammophon. He has performed with Winton Marsalis at Jazz at Lincoln Center and on Broadway in the orchestra for the musical Wicked. He teaches oboe and chamber music at Skidmore College and coaches in the graduate orchestral performance program at the Manhattan School of Music.