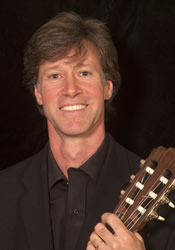 Concert Artist Guild Finalist awarded a solo guitar recital at Carnegie Hall.  A sample of Brett's performances in the United States and Canada include solo recitals at the 92nd St. Y, St. Patrick's Cathedral, an all Bach program at Steinway Hall, the Cleveland Classical Guitar Society, and the Domain Forget International Festival in Charlevoix, Canada.

Most recently Brett has become a member of the Finger Lakes Guitar Quartet with a newly commissioned work written for the group by Evan Mack performed with the Albany Symphony Orchestra.  A sample of performances with this group include the Lenten Chamber Music Series in Hartford, CT, the Esbenshade Concert Series at Marietta College, the de Blasis Music Series at the Hyde Collection, and the Luzerne Chamber Music Festival.
Having held several teaching positions at various colleges and Universities, Brett is currently on the music faculty at Skidmore College.  Brett is also extremely active with his private teaching of students one on one and his coaching of guitar ensembles.